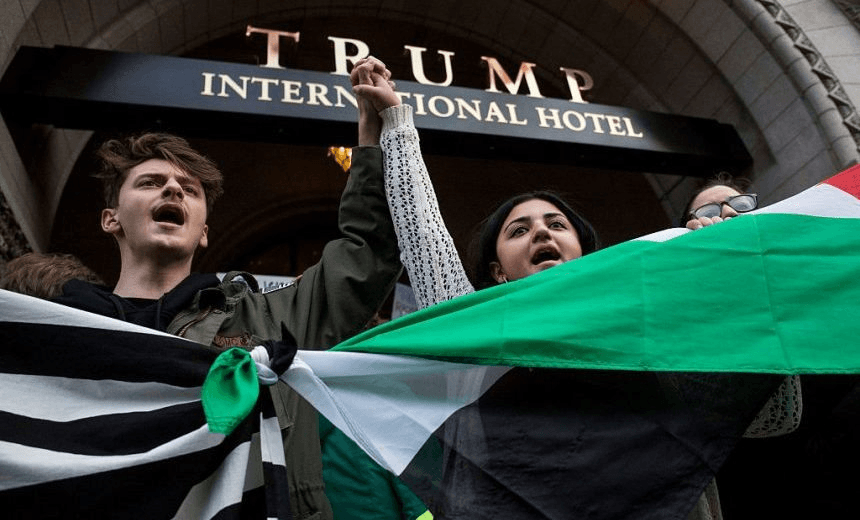 Trump’s racist ban has shaken me to the core, and Bill English has let us down – an Iranian New Zealander writes

A dual citizen of Iran and New Zealand argues that the PM’s response to the US visa ban falls far short, and explains why, whether the ban affects her or not, she’s personally boycotting Trump’s America.

“If you are neutral in situations of injustice, you have chosen the side of the oppressor.” – Desmond Tutu

It is easy to imagine that New Zealanders are not affected by Donald Trump’s ban on visas for people from seven Muslim-majority countries. But as a dual citizen of Iran and New Zealand, the appalling order – which I regard as racist – has shaken me to the core.

In my opinion, Bill English’s remarks on the issue – in saying simply “we do not agree”, refusing to challenge Trump directly and rejecting the suggestion it is racist – do not go far enough: he should robustly and directly condemn the ban.

It is hard to avoid concluding that the countries named by the US government are those that have been invaded, bombed and meddled in by the American superpower. That those forced to flee their homes following interventions are now banned from entering the US only adds salt to the wound.

Millions of ordinary people from seven countries are now banned; all, in effect, branded terrorists – it is hard to overstate just how incredibly outrageous and unbelievably racist this is. What happened to all the democratic values that the US was built on? They don’t even ask you who you are – the moment they see the word Iran or one of the other six nations in your passport you are adjudged guilty: banned from visiting your children or taking up a guest lectureship at a university or attend a conference. It’s like condemning the entire population of Christians and calling them terrorists for what a few did to that Quebec mosque yesterday, what’s the difference really? Nothing.

Religion is a private matter – no one has the right to ask you what your faith is in determining whether or not you can enter a country. And it is absurd to assume that because you are from one of the countries you are Muslim. In Iran there are numerous Bahai, Jews and Armenian Christians; in Iraq, hundreds of thousands of Assyrian Christians. Trump has said Christian Syrian refugees are welcome, but how does he know someone is a Christian or a Muslim at the first place? Iranian women in the States or even here don’t tend to wear hijab, while millions of men don’t wear a beard, yet most are Muslims – a lot of people don’t advertise what their religion is by changing their appearance it’s an absolutely private matter to them and their relationship with God is in their hearts. That’s why the whole thing is just so ridiculous.

America is home to a huge number of Iranian Americans, many of whom fled the current conservative regime of Iran which came to power in 1979. Just like a lot of other people they left for the US to embrace “the land of freedom”, where they can express their anti-Tehran regime feelings freely and without fear of prosecution, where they will be respected as equal human beings.

Many are now among the most educated in the US, having become top university professors, medical doctors, surgeons and engineers. This was a huge brain drain for Iran, contributing massively to the US economy and enriching its culture. A lot of those who left still have parents and family in Iran who do not have green cards yet regularly visit their children and family in the US. They are now barred from entering the US. It is unclear whether dual citizens of Iran and New Zealand will be barred from entering the US. I have many relatives in the US who I regularly visited in the past. Last time I visited was to attend my cousin’s 50th birthday where we had a wonderful family reunion in San Francisco celebrating her birthday.

And yet today I feel that I don’t want to ever put my foot on the US soil again. Not for fear that they would not approve my visa because of the country I happened to be born in, but because the US ruling leave me disgusted, and disinclined to apply for one ever again.

I fear we are confronting a new face of hatred, racism, even fascism: inciting division and resentment purely based on country of birth. We thought the George Orwell’s 1984 could never happen to us in the 21st century.

If the governments around the world, New Zealand included, do not raise their voices now, the US government will take strength from the silence, feeling more empowered to do injustice. By in effect remaining neutral, the NZ government chooses not to stand for basic human rights of its citizens, citizens such as me, the proud citizen of two equally amazing countries, and chooses to make no attempt to prove that it firmly believes in the International UN convention on the Elimination of all Forms of Racial Discrimination around the globe and at home.