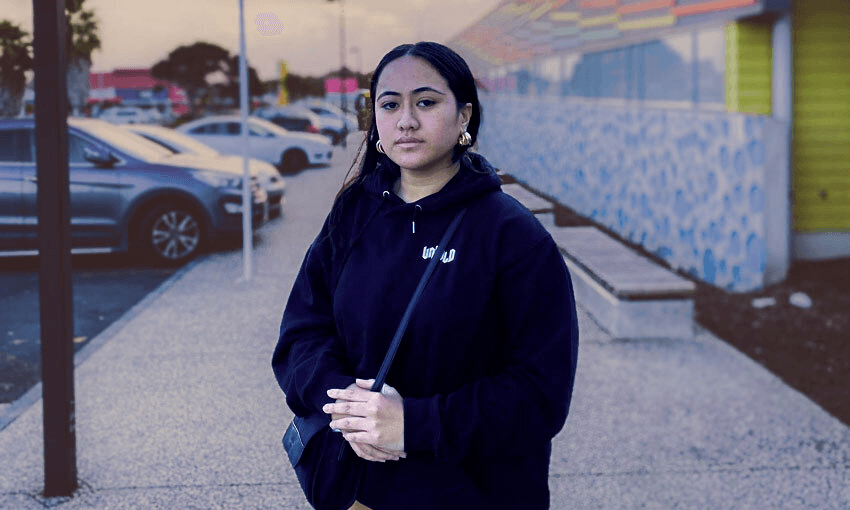 Award-winning poet and indigenous activist Aigagalefili Fepulea’i Tapua’i is a young woman making waves. And, as Justin Latif reports, a new film focused on her fight for climate change shows she will not be silenced.

As I wait for Aigagalefili Fepulea’i Tapua’i on a bitterly cold Sunday afternoon outside her central Auckland dorm hall, I’m expecting to meet a fairly typical teenager, albeit a highly intelligent, outspoken one.

I suspect she will display a mix of hubris, idealism and passion, typical of her generation.

But after our two-hour interview, my preconceptions have been proved wrong. Aigagalefili Fepulea’i Tapua’i – Fili to her friends – who shows wisdom beyond her years, is far more interesting than that.

We’re meeting to discuss her appearance in the award-winning documentary High Tide Don’t Hide, which screens this Thursday at the Māngere Arts Centre.

But naturally our conversation veers into reflections on 2020.

What was a year to forget for most was a memorable time for Fepulea’i Tapua’i’ as she emerged as one of South Auckland’s leading voices advocating for indigenous and Pacific youth.

Her withering Instagram posts decrying how Covid-19 had affected her peers were followed by multiple interviews, articles, speaking requests and awards, plus an appearance on TVNZ 1’s general election leaders’ debate. In September, she was profiled for The Spinoff by Michelle Langstone, who wrote of her “mesmerising” spoken word poetry performances.

This year has been quieter. While she says she still receives around 30 appearance requests a month, life has “slowed down a lot”, despite the added pressures of life as a environmental engineering student at AUT University. She plans to also begin a law degree next year.

“I’ve been exploited so many times that I had to develop some boundaries,” she says of her decision to temporarily pull back from public life.

“I’ve had some experiences where I was the only one on a panel not getting paid or sometimes I realised they didn’t really want me – they just wanted a brown face.

“It starts to feel microaggressive when people want you to share your traumas just so they can clutch their pearls and wipe their tears and then go back to their privileged lives.

“But at the same time I also don’t want to stop – because climate change isn’t going to stop.”

‘It breaks my heart’

Before Fepulea’i Tapua’i was challenging Jacinda Ardern and Judith Collins on educational policy on live television, she was a climate change activist.

As the film shows, her greatest challenge isn’t convincing politicians that climate change action is necessary. Rather it’s ensuring the voices of young South Aucklanders are respected by the other activists within the movement.

“None of us really realised that we’d have to be fighting for climate change and fighting against racism in the climate space as well,” she says now.

When the first School Strike 4 Climate took place on March 19, 2019, few South Auckland pupils took part as it coincided with Polyfest, one of the most important cultural events for young people in the region.

Fepulea’i Tapua’i says this was initially not seen as a problem by the school strike movement’s organisers, but when she highlighted this lack of diversity on The Project, the organisers changed their tune.

“It seemed like they only took me seriously because I called them out on national television – and then they were like ‘oh we’ve got to have you here’.”

The film also reveals that some of her fellow activists did not feel the risks to Pacific peoples from rising sea levels was an issue the steering group should focus on.

“I fear my island will become nothing but a story to tell,” she says in the film. “But how do people talk about our genocide like it’s nothing? It breaks my heart.”

However over the course of the film her concerns are addressed. By its conclusion, a united front has been established as the disparate groups prepare for an extra large school strike event.

“It was definitely jarring – that I would come into these spaces and they weren’t interested in actually supporting those living through climate change,” says Fepulea’i Tapua’i of that time.

“But in the end I came to see it as an opportunity to give attention to the things that are being left out of the conversation, which is pretty much what the documentary captures.”

‘We should never feel ashamed’

I ask her where she finds the confidence to stand up to her bullish and equally confident peers, and her response is typically matter-of-fact: “Indigenous activists all over the world are being murdered by their governments just for speaking up, so I can’t say it’s brave for me to speak up here – it’s just the right thing to do.”

Fepulea’i Tapua’i hopes her fellow South Aucklanders will find inspiration in High Tide Don’t Hide to speak up for themselves more often, and more loudly.

“When you’re from South Auckland, we’re expected to leave our community at the door when you come to these palangi [western] institutions and spaces, but actually our story enriches these spaces.

“It gives these spaces more depth and more substance and ensures bigger changes, rather than just doing what we’ve been conditioned to do, which is to be ashamed at the back of the room that we’re from southside.

“We should never feel ashamed and we should want to see our people on screen – paying it back and paying it forward.”

High Tide Don’t Hide screens at the Mangere Arts Centre, Thursday, August 12, from 7pm. Tickets are only $5 so bookings are essential.