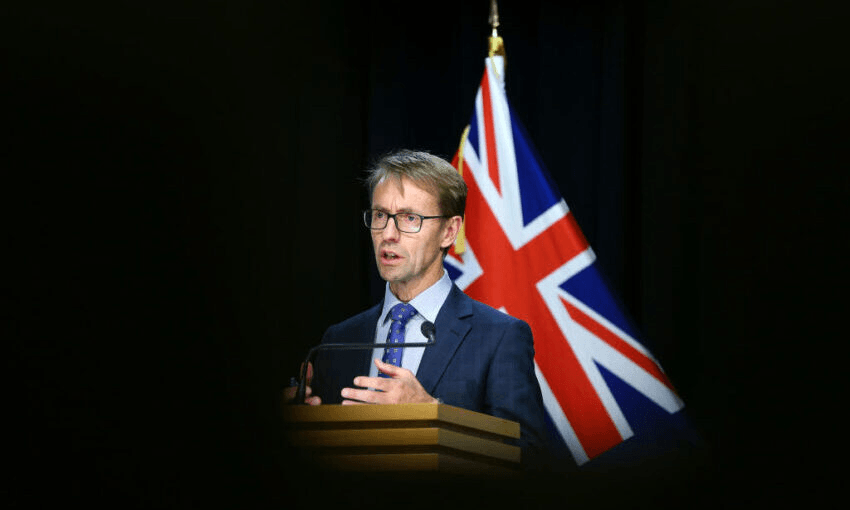 The director general of health, Dr Ashley Bloomfield speaks to media during a press conference at the Beehive (Photo: Hagen Hopkins/Getty Images)

The director general of health, Dr Ashley Bloomfield speaks to media during a press conference at the Beehive (Photo: Hagen Hopkins/Getty Images)

A new national survey shows overwhelming backing for the government’s Covid-19 response – and a clear majority willing to submit to location tracking, should it be introduced. Stickybeak’s David Brain breaks down the data.

An exclusive new survey from Stickybeak for The Spinoff shows an overwhelming majority of New Zealanders approve of the government’s response to the Covid-19 crisis. It also shows 97% of the country claims to have either mostly or entirely complied with the conditions of the level four lockdown.

Here I’ll break down the numbers in detail.

Approval of the government’s reaction to the crisis has risen from 80% two weeks ago as the lockdown was announced to 85%. This figure mirrors the 84% approval from a Colmar Brunton poll published this week and remains incredibly high compared to other countries.

Two weeks ago we reported that 9% of Kiwis said they had no intention of complying with the level four lockdown restrictions, but when it came to it, only 2% say they’ve disobeyed.

Whether it was the prime minister labelling non-compliers “idiots”, the launch of a “dob-in” line and an effective police communication campaign, or just the realisation of how serious things had become in other countries, an overwhelming 79% say they “entirely complied”, with another 17% following the example of the health minister and “mostly” complying.

Breaking that figure down further, 85% of women say they’re complying entirely compared to 73% of men.

Given the far-reaching restrictions of alert level four on the freedom of individuals, businesses and organisations, this is an extraordinary scale of behaviour change in a very short time.

Our figures for national cohesiveness have also held up over the last two weeks. The experience of the lockdown has left 63% believing that New Zealanders will be more “united and supportive” of each other and only 12% saying we will become “more suspicious and less trusting”. This is in line with what we thought the experience would do to us two weeks ago.

Domestic cohesiveness also appears to be surviving two weeks of bubble living, with 63% of us saying the experience has been easy or very easy. Nationally, however, the fact that 14% are finding it hard or very hard is significant and is bound to contribute to longer-term social and health issues that are already at challenging levels.

People living with children (under-18s) are doing it tougher, with 21% saying they’re finding the experience hard. Happily, the lockdown looks to be on track to ease in two weeks, but if it didn’t and these numbers were to increase, they’d surely begin to impact general lockdown compliance.

Political and (for the most part) media consensus broadly approving the government’s strategy has meant there hasn’t been a lot of mainstream discussion of alternative strategies to handling the pandemic. The U-turn of the UK government over its herd immunity idea and widespread doubts about the Swedish approach, which has very few restrictions on movement and leaving many businesses open, has hardly encouraged it.

But as the success of the government’s strategy on closing down the spread of the virus becomes increasingly apparent over the next two weeks, the calls to loosen alert levels and get people back to work and school – possibly faster than epidemiologists would like – are bound to grow, and the counter-argument that a damaged economy can also cost lives will inevitably be made more widely.

Paradoxically, the success of the government’s approach to closing down the virus with fast and hard measures may increase early calls for its relaxation. Currently, one in five believe that “over the long-term, a national lockdown will kill more people than it saves because it does extreme economic and social damage”. While it’s a minority, it’s a sizeable one. We’ll see if it grows in our next poll, especially if there are any delays or regional exceptions to the lifting of the initial four-week lockdown.

The next phase of the battle against the virus will inevitably involve more monitoring and testing, particularly if the country is to be able to relax restrictions. Some countries have used technology to help with this, most notably South Korea and Singapore with whom the government has said it is talking about Bluetooth-enabled, phone-based tracking.

Usefully for the government, 58% of us support the idea of health authorities location-tracking our smartphones to help stop the Covid-19 spread, with 21% opposing and 21% unsure. Breaking those responses out by age group shows that the young are less supportive than the old. For the 18-39 age group, there’s 45% support; for 40-59, 58% support and for those 60 and over, 71% support.

But overall, that’s a high trust response for a potentially intrusive technology, which we can probably ascribe to both the scale of the perceived threat to us all as well as the satisfaction to date with the government’s performance.

Finally, we asked people where they stood on teddy bears. An impressive 41% of people say they’ve put one in their window (47% of those with children under 18 years old in the house), which is probably a higher proportion than the actual percentage of households as one teddy may, of course, have four or five “owners”. Nonetheless, that’s a lot of teddy bears in windows.