The 3,000km Te Araroa trail, which spans the length of New Zealand, attracts walkers from all over the country and, until recently, the world. A growing network of Trail Angels are taking in weary travellers and giving them a taste of Kiwi hospitality.

“I guess there will be some different approaches out there. Some people might be a bit more hands on. My approach is just ‘my house is your house; you look like a trustworthy person. Here’s the key. Don’t nick anything’.”

Delman founded the Te Araroa Trail Angels’ website and Facebook group three years ago. Trail Angels are volunteers who provide support to through-walkers tramping Te Araroa, the 3,000km walking route from Cape Reinga to Bluff. That might include accommodation, travel, food and drink, a place to clean up, or a site to pitch a tent.

He and his wife were walking the trail, but work commitments meant he could not join her until she had completed the North Island.

“I thought, let’s see what I can do to help my wife for the first part of the thing in the North Island. I’d been away and heard the phrase ‘trail angel’ – it’s a phrase used in the United States. I hadn’t heard it in New Zealand. I started looking online and there wasn’t really much.  So I set up trailangel.co.nz forum and the Facebook group. Just simply for that reason.”

While he and his wife walked the South Island, the site gained momentum.

Delman wanted a community to help Te Araroa trampers. Once he had walked the South Island, he returned to his Wellington home and started hosting other walkers.

“I guess it’s mostly just providing some amenities and comforts. People are going to be tired. They might not want to be sociable, and that’s OK. It’s about providing a nice, welcoming Kiwi ‘hello’. Just saying ‘Come and sit on the sofa. Have a shower. You don’t have to talk to me if you don’t want to’.”

Most hikers discover the trail angels via the Facebook group or website. The Facebook group alone has 2,500 members including both trampers and angels. But the angels are also their own loose network, so news spreads informally too.

“My sister-in-law lives in Hamilton,” says Delman. “She got some hikers through then when they made it to Wellington, she had already told them about me.”

Delman says there can be one or two niggles that can be solved with communication. “The whole thing has been a really positive experience, just sharing stories, being able to see that you can nourish a hiker who looks weary and tired. Just make them a bit of dinner. That’s the real highlight, to see the gratitude on their face.”

Te Araroa Trail is run by Te Araroa Trust, in partnership with the New Zealand Walking Access Commission. The trust’s executive director Mark Weatherall says the trail has had angels as long as it has had trampers. Some of them leave chilly bins of food or drink along the trail to be found. Some of them give people rides in their car to help them escape bad weather.

“The angels are not a formal part of the trail, but they are a magic part of the trail,” says Weatherall, “We don’t tell them to do it, but we do really appreciate what they do and how much they add to the trail. Te Araroa wouldn’t be what it is with them.” Jo Gallen lives in Bulls, 400 metres from the trail route. She and her family became angels five years ago.

“We had seen them walking into town. And, you know they’re not locals. They’ve all got packs on their backs. So I stopped this young English couple one day. I hadn’t heard a thing about Te Araroa until then. So, I came home to my partner and said, ‘Hey, we have got to get them off the road and somewhere safe’.”

Gallen says her role is to give a taste of Kiwi hospitality – a meal, a shower and a cold beer at the end of a hot day.

Gallen’s guests can be pretty weary. “It’s a pretty monotonous bit of road they have to walk. They have been on the Whanganui river, and they’ve lived the good life, and sat on their bum for five days. Then they walk here and they are just broken, some of them. When it’s hot, their feet are all blistered from starting out walking all over again.”

For Gallen, the highlight of being an angel is the friendships she and her family make.

“My partner and I have four teenagers at home – and our kids could travel the world and not have to pay accommodation now. We’ve met a couple who live in Germany – he’s Scottish, she’s German and they were here four years ago. And they have been back and had Christmas with us for a month in 2019. Those friendships, I’m just blown away – someone walks into your life and you feel like you’ve known them forever.”

Sometimes their English is limited and that can make it a hard night, but you know they are hungry. That’s the universal language.

Gallen says it’s made her kids better people. “It’s taught them talk to strangers – get off their phones, come out to talk to people, to find out where they are from and what they do and so on.” 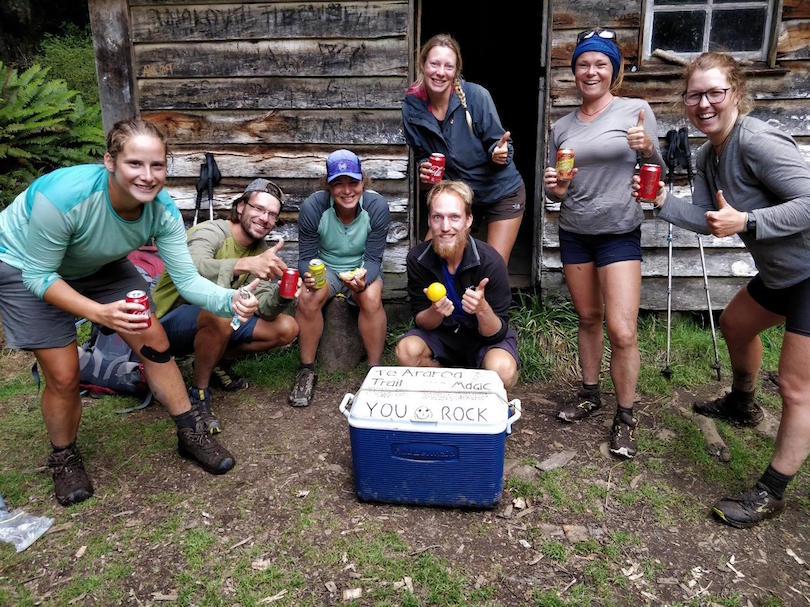 Trampers discover a chilly bin gift of cold drinks, chocolate and fruit from a trail angel at Martins Hut,
the last hut on the trail for southbound trampers (Photo: Tozan Delman)

Nicci Coffey met the founder of Te Araroa, Geoff Chapple, when he was walking the country.

“He had this crazy idea – and I thought ‘how cool!’ So I’ve always followed Te Araroa.”

Later, when Coffey moved to Island Bay in Wellington, she discovered that she lived at the end of the final step of the North Island trail. She visited the Facebook trail angel network.

“I thought that was cool. And then I put a post in the trail angel group, saying ‘Hey, we’re at the end of the North Island – hikers welcome’. And that’s how it started!”

Coffey meets most of her trampers from the Facebook page or through other local trail angels. She also put up a little trail marker on the sign at the rock at the end of Island Bay, saying, ‘Trail angel 1km away’.

Coffey says hikers and trail angels are all members of the same tribe, so they are easy to help.

“Everybody has their own idea of what to offer. You can choose to do what suits you. What I do is offer people my backyard for their tent. We’ve got access to washing, wifi, water and toilets for them 24/7. Island Bay is full of lovely little facilities like the supermarket and chemist so they can get whatever they need nearby. If it’s a night that works for us we have them in for a home-cooked meal – sitting down and chatting is the best bit, swapping a few stories.

Like Gallen, Coffey says one of the biggest benefits is the perspective it gives her kids. She and her family walk the North Island sections of Te Araroa whenever they can.

“When we are on holiday we go ‘is there a bit of Te Araroa that we can knock off?’ The bits that I do connect me with the hikers that have done them too and then they tell me about the other bits.

“The focus has always been getting my kids to understand that there are more friends out there than enemies. Being a trail angel brings the world to my back door. It’s just a way of paying it forward.”