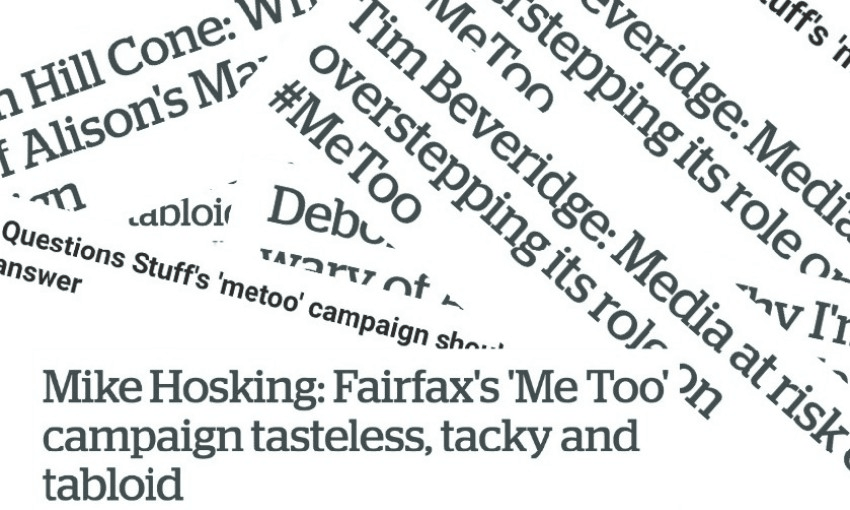 The #metoonz campaign is not beyond criticism, but it deserves better than this

First came the bizarre witch hunt cartoon, and then the indignant tutting. Jess McAllen considers the responses to the #metooNZ investigation launched a fortnight ago by Alison Mau.

Mike Hosking called it “tacky and tabloid”. David Cohen asked about a “sense of professional justice – or ideological fantasy”. Tim Beveridge decried a “trial by media”. On Newstalk ZB Janet Wilson said the investigation reminded her of McCarthyism in 1950s United States. A cartoonist at The Press (part of the company running the investigation) likened it to a witch-hunt.

And just yesterday, Deborah Hill Cone wrote about her concern for victims telling their story for the first time. Great point. Does that concern extend to the door-knocks journalists do hours after a loved one has been murdered or died in a car crash? Or the intense suicide reporting last year where people who had been through serious mental health issues were named and families who hadn’t grieved properly were interviewed? For as long as journalism has existed people who want to tell their story have had a right to tell it and journalists have had to abide by a code of ethics. Sexual abuse victims aren’t any different.

If you think it’s bad now  – the investigation hasn’t even published anything yet  –  wait until respected public figures are exposed. It will be a heavy time for a small country. We have two degrees of separation and a very literal “she’ll be right” attitude. Some of us will have to grapple with the knowledge that the very systems and mentors that helped us climb the career ladder were responsible for others jumping right off.

So raise a glass to the people with platforms and their opinions because they often reveal more than they realise.

New Zealand has a serious problem with rape. We know this because it has been widely reported on by journalists. Not the police. The naivety of people saying “oh but surely we don’t have a Weinstein-like problem” is telling, as is the number of people who think men will be burning on crosses for touching a woman’s knee. In reality, we have traumatising rape cases in court every other day. But what is so wrong with not wanting to be slapped on the ass while you go about your daily life? It’s hardly a revolutionary demand.

Here’s a snapshot of a few of the cases that have been reported in the last six months alone, because Roast Busters didn’t happen in a vacuum: The Auckland school rugby coach who has 81 charges of sexual abuse and is due to go on trial this year; the Kaitaia hostel owner who was jailed for drugging, assaulting and photographing more than 12 men; actor Rene Naufahu and his classes where he indecently assaulted students, the hip hop producers jailed for rape; this tattooist; a Dunedin psychiatrist found guilty of sexually assaulting a mentally unwell patient (and then threatening to have her sectioned under the Mental Health Act); a man jailed for sexually assaulting two children; a former Papamoa Scout leader sentenced over child sex charges; a music teacher jailed for historic sex crimes; a home detention sentence for a man who sexually abused his daughter.

These are the stories that made their way through the brutal victim interview process, and were charged or found guilty. This process is not the norm.

Hopefully New Zealand’s delayed focus on #metoo means we can reflect on the positives and pitfalls of its overseas counterpart. When the Aziz Ansari allegations came to light – in January the website Babe.net published an account from an anonymous 23-year-old woman about a date that she understood to be sexual assault – the reckoning around #metoo became more divided.

It was about an encounter that was initially consensual until she became uncomfortable with his aggressive advances. The story highlighted a need for reporters to do due diligence around non-sensationalised sexual assault reporting. There was fervent debate in the media and claims that #metoo had gone too far. This extended to those who generally supported #metoo and felt the story was valid but badly reported. The Guardian ran a piece titled The poorly reported Aziz Ansari exposé was a missed opportunity, feminist website Jezebel asked, Babe, what are you doing?

So why do people think #metoo supporters won’t criticise Stuff if they screw up? Slipshod reporting only makes it harder to speak out. It gives people more ammunition to shoot down claims of abuse. Perhaps it’s a basic lack of respect for women. I doubt if the team investigating the topic was comprised entirely of men that we would be having the same discussion. In fact, they would probably have been praised for their bravery.

Having a concerted campaign with a dedicated team and editors publicly defending the reporting opens up a new opportunity. Some people have taken issue with the campaign being announced before any work had been done, but this means there is a clear pathway for people who are thinking of going to the media. Stuff Circuit reporter Eugene Bingham notes that this outcry didn’t happen when they launched a service for anonymous tips. Reporters regularly do social media callouts to ask for people who have experiences with whatever topic they are writing about, or ring unions to ask for people who can talk to a topic . This is just that on a grander scale.

#MetooNZ makes me feel less isolated and has reignited a sense of confidence that my experiences are valid. I also have some issues with it. I want more focus on child sexual abuse and sexual abuse outside of the workplace. Also, aside from a few notable cases – Terry Crews going public with his experience, as well as the allegations against Kevin Spacey – the conversation to the general public’s mind seemed to exist in a woman/man binary. It’s a dangerous thing to do because sexual assault is alienating enough as is and affects everyone.

The main reactions seem to come down to defensiveness, disbelief or a lack of compassion. This has been going on for centuries and our way of thinking about consent is due for a major shake up. Accept, examine, talk. When it comes to rape, she won’t be right – she never was.