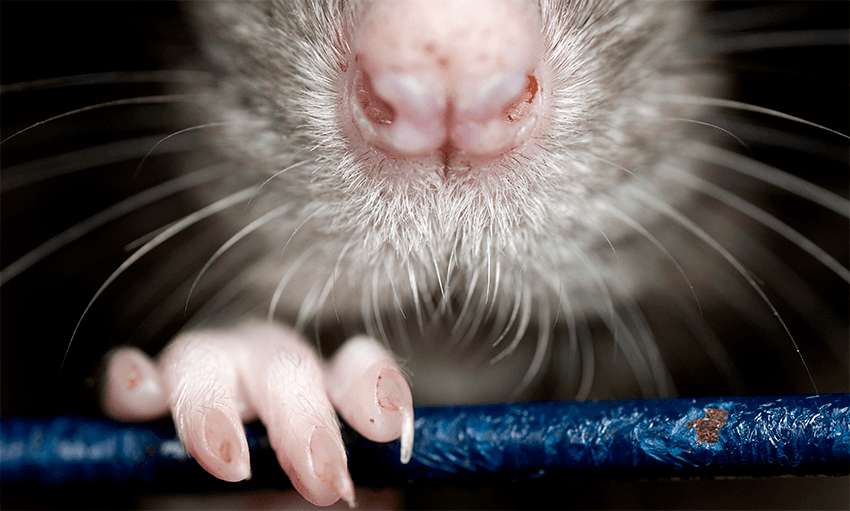 A biblical plague of rats is terrorising Titirangi

Responding to reports that packs of cat-sized rats have taken over Titirangi, Don Rowe travelled to West Auckland to find out the truth.

There’s an infestation in Titirangi and it’s not just white girls with dreadlocks. Rats “the size of cats”, ten to a pack, staring down residents like a gang of mean teenagers. Frothing, pulsing rats, fat and beady-eyed. It’s been on Stuff news, Three News, bloody old Prime News at 5.

“I’ve never heard this happen before,” kebab shop owner Thomas Yadegary told Stuff. “I’ve never seen the rats but if it keeps increasing then it’s going to be a huge problem for everyone.”

Too much feeding the beloved Titirangi village chooks, the papers said – an excess of feed lying on the streets. If “feeding the chooks” is indeed an euphemism for jerking off, then the residents of Titirangi have called down a plague upon themselves with their patchouli-smelling jade-egg masturbation, because the rats are fucking everywhere. They’ve moved in like Germans on an OE, feasting on scraps, shitting in the bush, contributing nothing and making a mess. Reports of their size, however, have been greatly exaggerated: the rats are big, huge even, but they are equivalent to only the smallest of cats. They’re girthy, but within reason.

On Rangiwai Road, just off Titirangi’s main street, the rats were writhing. Perched on their ratty back legs, holding pieces of grain in their tiny rat hands, they nibbled and munched, gorging themselves on food ostensibly meant for the village’s grotty chooks. Utterly fearless, they flowed liquid over the tarseal, quivering and warm, lithe and mammalian.

As I watched them eat, a man with a ponytail attempted to parallel park his silver 4WD, struggling with the clutch and incline, winding down the window to speak.

“Wild, right? But everyone has a right to live. It’s not really their fault. Either way, it’s a bad day to do acid.”

He rolled up his window, face obscured by a smudge or lick mark. He would not give his name. Six different locals refused to talk, saying if they did so it would be on the Titirangi Community Facebook group within minutes, and the woman who feeds the scody birds is really quite frightening.

“We don’t hear native birds here anymore,” a woman told me from a balcony. “It’s disgusting. That’s off the record though.”

True, the Facebook page is utterly aflame with discourse. Some people allege the ‘rat infestation’ is a smear to get rid of the village chickens, ugly as they are. Others allege it’s all fake news drummed up to encourage a 1080 drop, and that the rats don’t exist at all, that they are yet another psy-op dreamed up by Jacinda, the UN, John Keys and Agenda 21.

The reality on the ground proves that to be a lie. Behind the doctor’s surgery the rats scurried in the brush, traceable through the explosions of birds taking flight to evade their gnawing maws. They squirmed in and out of tree roots and brick work, scampering through a pile of Jim Beam cans, worming wet beneath the wooden deck.

Forest and Bird have been warning of a mast season, where trees produce a bumper crop of seeds and fruit, for months. Podocarps like kahikatea and rimu are utterly virile this year, and the abundance of food leads to an explosion in rodent population. More than $30m has been set aside to deal with the ecological fallout. Yet in Titirangi, some locals are pointing finger at ‘Barbara’, a “local identity” who is “vehement about her God-given right to feed the birds.”

“We need to lace the food with poison,” a passerby told me.

But poison has been laid before, with the chickens taking severe collateral damage.

“They got all gross-looking,” her friend said.

But something must be done – after all, the rats are frightening children. When staying with her sister, Hannah Clarke’s four-year-old son Austin loves to visit the village chickens when he’s in Titirangi. Last month while keeping an eye out for the flock, he yelled “Mummy there’s possums!”

“No, we’re looking for the chickens,” she told her son.

And they watched as a pack of huge rats ran across the street, like something out of Oliver Twist, like a scene from the Old Testament, like a fucking biblical plague.

May God have mercy on the pagans, Wiccans and atheists of Titrangi. That or bow down to your sandalwood Rat King.