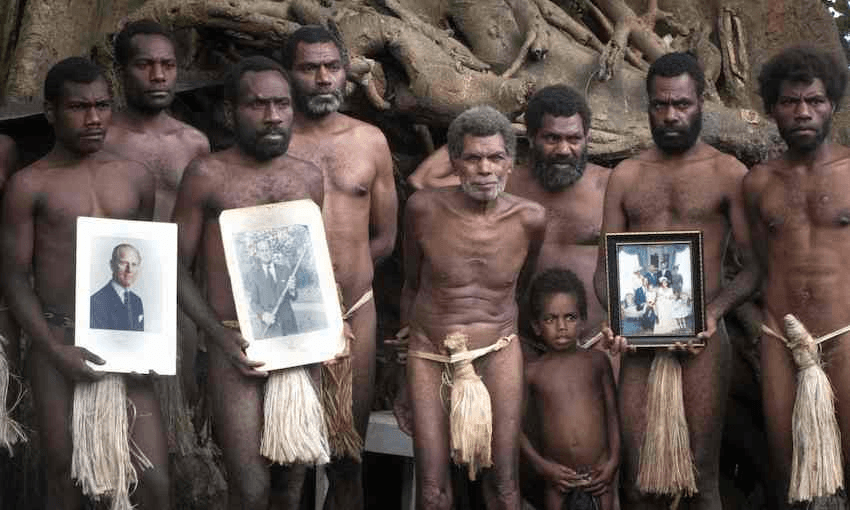 Far from worshipping their former colonial masters, by proudly appropriating and indigenising a piece of British culture the Tannese are asserting their own mana, writes Scott Hamilton.

In the aftermath of Prince Philip’s death, the western media has turned its gaze to Tanna, a mountainous island in the far south of Vanuatu. Tanna is the home of the Prince Philip movement, whose members revere the late consort to the queen. A series of ceremonies on Tanna have been held to mourn and celebrate Philip.

According to the Guardian, the Daily Mail, and dozens of other western newspapers, Philip is regarded as a white god on Tanna. By choosing Philip as their deity, Tannese have supposedly shown their reverence for Britain and its monarchy.

In newspapers and on social media, the Philipists of Tanna have prompted both amusement and pity. How, westerners have asked, could Tannese be gullible enough to believe in the divinity of a man of flesh and blood, a man with fairly obvious flaws? Many commenters have attributed the supposed gullibility of the Tannese to the remoteness of their island from the west, and to their lack of western-style education.

But the coverage of the Prince Philip Movement says more about the west than it does about Tanna. The Tannese do not consider their island remote; for them, it is the centre of the world. They are not in awe of Britain; they struggled for decades to win independence from the Union Jack. And they do not consider Prince Philip either white or a god.

Matthew Baylis’s 2013 book Man Belong Mrs Queen is a good corrective to the myths about the Prince Philip movement. Baylis is a British screenwriter, comic novelist and journalist; he visited Tanna expecting to collect amusing stories about its Philipists. But after spending many nights in the bush drinking very strong kava with his hosts and hearing their stories, Baylis’s mockery turned to affection and respect. His book lays out what the Prince Philip movement really believes, and explains why it emerged on Tanna.

In 1906 Britain and France jointly colonised Vanuatu. Their government was weak and chaotic – it had two governors, two court systems, and even two postal services. On many islands missionaries were given responsibility for enforcing colonial rule. A team of Presbyterians, some of them from New Zealand, were given power over Tanna, and began to try to replace the island’s ancient and intricate Melanesian way of life with fundamentalist Christianity. The missionaries banned dancing and carving, and made bonfires from uprooted kava plants. Missionary schools taught Tannese children about the glories of the British empire, and proclaimed the backwardness of Pacific peoples.

Tannese soon rebelled against the missionaries. They pulled their kids out of schools, wore the traditional loin cloth instead of British dress, and gathered secretly in the bush to dance and drink kava. But the Tannese were not content simply to practise their traditional ways of life. They began to appropriate and indigenise parts of foreign cultures.

Tannese religion had always been associated with Mount Yasur, a violently active volcano in the north of the island. Yasur was home to spirits of the dead; its blazing crater was a portal to other worlds. As Mathew Baylis explains, Yasur has an important place in the cosmology of the Philipists. Tannese believe that spirits can emerge from Yasur, and inhabit human bodies. The Philipists believe that Prince Philip was a sort of vessel for the spirit of a powerful Tannese ancestor who emerged from Yasur. The queen’s consort was, then, a black man, a man Tanna, under a white disguise. By claiming a place near the centre of the British monarchy for their ancestor, Tannese asserted their own mana. They were not gullible anglophiles; they were proudly appropriating and indigenising a piece of British culture, and by doing so asserting their equality with their former colonial masters.

Over the decades Philip and his Tannese devotees exchanged messages, gifts, and photographs. The Tannese repeatedly invited “the man belong Mrs Queen” to “return” to their island, and to bring his wife with him. Baylis suggests that Philip, who loved the outdoors and loathed many of the rules and rituals of royal life, was attracted by the fantasy of running away to Tanna.

Baylis notes parallels between Tannese and British perceptions of Philip. The queen’s consort was born in Greece, then exiled as a baby. He spent much of his youth moving around continental Europe. Philip was always perceived as a foreigner by some Britons; journalists nicknamed him Phil the Greek. In Britain as on Tanna, Philip was considered someone whose title and appearance hid a very different identity.

The Prince Philip Movement is often linked to an older, larger and even less understood religious movement on Tanna. The devotees of John Frum hold celebrations on July the fourth, fly American flags, and dress up as American soldiers. In the west, it is widely believed that Jon Frum was one of the American soldiers who visited Tanna during World War Two, and who introduced islanders to fabulous devices like planes, cars, and radios. By deifying and honouring John Frum, Tannese are supposedly trying to ensure the arrival of more treasures from America.

But a different story is told by the John Frum Files, an enormous collection of papers written by British colonial officials about the movement. When the British left Vanuatu in 1980 they sent the files to Fiji; today they are housed in the archives of the University of Auckland library. Reading through the files, I found reports of a prophet named John Frum from the 1920s. Going from village to village on secret bush trails, evading missionaries and police patrols, John Frum presented himself as the vessel for an ancient spirit, and preached the virtues of Tannese tradition. His followers refused to work on Presbyterian plantations, drank huge amounts of kava, and danced themselves into trances.

In the 1940s the John Frum movement began to appropriate American imagery. They donned GI outfits and waved the Stars and Stripes because they wanted to enrage British colonists, who were jealous of American power. Some Frumites boasted that they could travel to and from America through the portal of Mount Yasur, and that he was often a guest at the White House.

Like the Philipists, the followers of John Frum have appropriated and indigenised foreign imagery in order to assert their own mana.

Pākehā New Zealanders who feel inclined to laugh at Tanna’s Philipists ought to remember that, only a century ago, tens of thousands of their ancestors believed in British Israelism, an ideology that identified the Anglo-Saxon peoples as a lost tribe of Israel. The British Israelites thought that Britain’s empire was God’s kingdom on earth, and considered the Windsors divinely guided beings descended from Old Testament prophets like Moses. William Massey, who was New Zealand’s prime minister through the First World War, was a British Israelite. So was the preacher and healer AH Dallimore, who held weekly packed meetings at Auckland’s Town Hall during the Depression. When Edward VIII was crowned king, Dallimore proclaimed him the “bride of Christ”.

British Israelism has withered, but the huge and sometimes hysterical crowds that greet visits by contemporary royals like Prince William suggest that the Windsors can still inspire an almost religious fervour among New Zealanders.