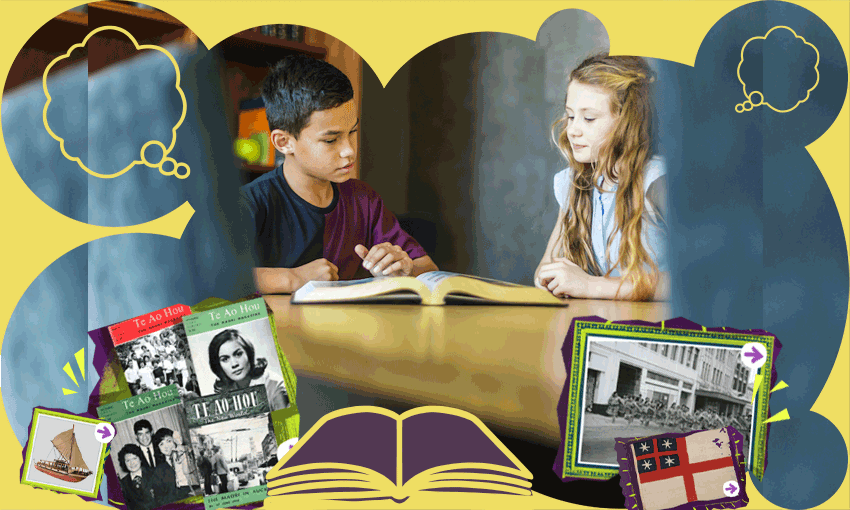 In 2019 the government announced its plan to require all schools and kura to instil in students a comprehensive understanding of New Zealand history. Yesterday that curriculum was released. Here’s what students can expect when the new programme is introduced next year.

After almost three years of drafting and consultation, the new history curriculum for school students has been released. The programme – Aotearoa New Zealand’s histories/Te Takanga o Te Wā – will be taught in all schools and kura from 2023, revamping a curriculum critics have long characterised as insufficient and Eurocentric.

Announcing the release of the curriculum, the prime minister, Jacinda Ardern, said it would give students a better understanding of one another through learning “more about Māori, the migrant history of Pasifika, and our Asian communities”.

Aotearoa New Zealand’s histories/Te Takanga o Te Wā is a meaty, ambitious and wide-ranging overhaul structured around the three elements – Understand, Know and Do – taught concurrently and woven together through years one to 10. It was developed in conjunction with academics, teachers, historians, the New Zealand Council for Educational  Research and the Royal Society Te Apārangi as part of a broader five-year overhaul of the national curriculum.

The full programme rewards closer reading, but for the rest of us, what’s actually in it?

The “know” component investigates these concepts through the lenses of:

And the “do” component of the curriculum is a typical “how to study history” set of guidelines such as:

Here’s what the combination of the three elements looks like in practice:

At an early primary school level, this means understanding basic concepts like Māori as tangata whenua and the original inhabitants of Aotearoa New Zealand, the significance of Waitangi Day, the implications of the different naming conventions between Māori and Pākehā, and the ways in which people’s lives and jobs have changed over time within their rohe.

From years four to six, students will learn about Māori navigation and exploration throughout the Pacific, the Pacific origins of Māori whakapapa and cultural identities, and the ways in which those identities evolved over centuries of interaction with the environment in Aotearoa New Zealand. They will learn about the two versions of the Treaty of Waitangi/Te Tiriti o Waitangi, the differences in translation, and the understanding held by Māori signatories as at 1840.

Students will also learn the ways in which the state has variously supported and excluded people in Aotearoa New Zealand through restrictions on voting rights and access to education and the welfare state, and the prevailing public attitudes towards ethnic groups at various points throughout history. They will learn about the struggles for equality led by groups like the suffragette movement and the Māori Women’s Welfare League, the difficulties faced by early Chinese migrants, and the activism of land rights icons like Dame Whina Cooper.

Students will explore the ways in which early Māori adapted to conditions far from the tropical Pacific, the economic realities of intertribal trade, early Māori commerce with European settlers and the beginnings of colonial industries like whaling and forestry.

At intermediate level, students will learn about the mid-20th century urbanisation of Māori and the resultant effects on te reo, tikanga Māori and traditional papa kāinga. They will also explore the movements to reassert te ao Māori that formed in response.

Students’ understanding of the ethnic, cultural and religious groups that comprise Aotearoa New Zealand – and their contributions to our current milieu – will deepen through study of early Irish, Chinese, Indian and Pacific communities. They will learn about the barriers to participation these groups often faced, and the ways in which they retain their unique identities today.

Students will gain a broader understanding of the context in which Te Tiriti was signed, including the significance of He Whakaputanga/The Declaration of Independence and the role played by Christian missionaries of the time.

They will learn about New Zealand’s actions in the Pacific, including the occupation of Sāmoa, the mismanagement of the 1918 pandemic and the annexation of the Cook Islands, Niue and Tokelau.

Students will also study the ways in which the Māori economy sustained early European settlements, and the damage to that economy caused by the New Zealand Wars and subsequent land confiscations.

In high school, students will take a deeper look at how immigration policy has been used to shape Aotearoa New Zealand’s population in pursuit of a dominant cultural ideal. They will explore how Māori, excluded from this ideal, felt colonised and forced towards assimilation. And they will learn how groups like the Polynesian Panther Party fought back to remedy racial injustices.

They will learn about Aotearoa New Zealand’s evolving attitudes towards international conflict, from unquestioning patriotic fervour in the early 20th century towards an acceptance of protest and a movement towards peacekeeping operations in the modern era. Students will also learn about Aotearoa New Zealand’s more shameful military histories, from the murder of Palestinians to the massacre of prisoners at Featherston.

The effects of the settler economy on the environment will be studied, including deforestation for pasture, the introduction of foreign pests and the rise and fall of primary industry in places like the West Coast. Looking forward, students will consider Aotearoa New Zealand’s opportunities and vulnerabilities in the international economy as well as the impact of neoliberal reforms in the 1980s and their repercussions which are still felt today.

The study of the colonial state also increases at this level. Students will learn about the intentional dispossession of Māori, the effects of raupatu, and the diminishment of mana Māori. They will explore assimilation imposed through the Native Schools Act 1867 and the treatment of prisoners following the events at Parihaka. The efforts of Māori to address injustice will be studied, including political actors within the system such as the Māori Party and those outside of it, such as Te Kooti and Rua Kēnana.

Finally, students will also learn about the workings of the Waitangi Tribunal and its role in the settlement process as well as its powers and methodology moving into a post-settlement Aotearoa New Zealand.