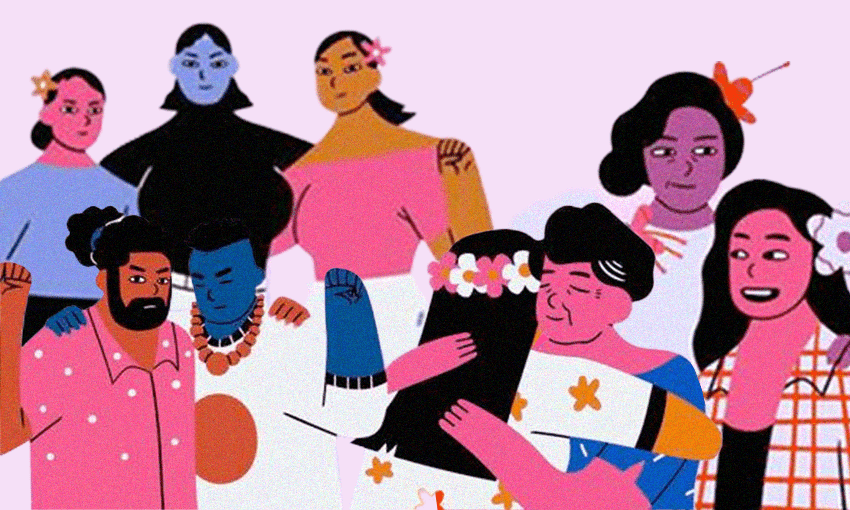 Established earlier this year, Pacific LGBTQIA+ group Moana Vā is among the organisations coming together to celebrate Christchurch Pride this month.

Growing up in Ōtautahi Christchurch wasn’t easy for Suli Tuitaupe. Not only was he a person of colour in a relatively white and conservative city, he was also gay.

Through his teens and into his twenties, Tuitaupe never let others know that he was attracted to the same sex. His family belonged to a church that was not accepting of the LGBTQIA+ community; meanwhile, the racism he was experiencing left him with little of the confidence he needed to feel safe with who he was. “Although my mum loved and supported me, there was always that thought of, what would the church think?” he says via Zoom, his background showcasing a horizontal rainbow of colours, parted in the middle with waves.

That image is the logo for Moana Vā, a collective founded by Tuitaupe that wants to be a place of belonging, mentorship and support for the Pacific rainbow community in Ōtauhahi. The group also welcomes families and allies, a first for the city.

Since March, Moana Vā has been hosting Koko nights – “koko” being the Sāmoan term for cocoa, one of the hot drinks on offer. The aim of these nights is to create a safe space for connection; during Christchurch Pride, on Monday June 20, there’ll be a special “open door” Koko night where you can win prizes, meet the team and members of the community. Even better, it’s a free event for all ages.

Tuitaupe says Moana Vā grew out of conversations with family members and friends of the Pacific rainbow community. He heard stories like that of a mother whose Sāmoan partner struggled to accept their lesbian daughter, and a father whose son had to go overseas to come out.

Tuitaupe, now a registered nurse, says that while heading overseas may be extreme, leaving their home town is a common story among rainbow LGBTQIA+ – or MVPFAFF+ (mahu, vakasalewa, palopa, fa’afafine, akava’ine, fakaleiti, fakafifine) – in Ōtautahi. “It’s hard for our Pasifika in Christchurch to be themselves and so you find individuals going up to Auckland because there’s a very strong fa’afafine collective there and there are also areas such as K Road where you can just be yourself,” he says.

Tuitaupe has some data showing how hard it is to come out in Ōtautahi. For the recent Manalani Project, researchers gathered data and survey information for and about the Pacific rainbow communities. “They noted that when they went around the motu to places like Gisborne, Tokoroa and Otago, there was a sense of togetherness and communities cooperatively sharing narratives about their experiences to be able to give the researchers some good feedback. When they came to Christchurch, they said it was a struggle to be able to mobilise communities together.” Given his own background growing up gay in the city, that didn’t surprise Tuitaupe.

That’s where Moana Vā comes in. The group officially launched online in late February and are currently focusing on building relationships at events such as this month’s Christchurch Pride. As academic, fa’afafine and Moana Vā patron Fuimaono Karl Pulotu-Endemann put it at the virtual launch of the collective, there are two non-negotiables in life: “One is your cultural identity, and the other is your sexual identity. As a Sāmoan and a fa’afafine, Moana Vā has the space to grow and nurture our Pacific people of all sexual identities.”

Already Moana Vā is beginning to make an impact in their city. At a vaccination event where Tuitaupe was a volunteer, he was approached by a young Tongan who spotted the Moana Vā logo sticker on Tuitaupe’s laptop. “She told me that she heard about the positive work Moana Vā has been doing, so once she had her vaccine shot done, I went and visited her at the observation area and gave her one of our badges. Her face lit up, and I thought ‘that’s a start to let someone in our community know that there’s a space for them’, and I hope that gives her the confidence to reach out if she so wishes,” he says.

Moana Vā coordinator Lana Sheilds says the people they serve are in different parts of their journey, which makes it all the more important to treat them all with respect and ensure the space they offer is safe. “You’ve got to treat that fine line cautiously because some may not feel ready to come out, some may have questions or there will be those on the other side and are needing to be around people with shared experiences.”

Koko nights are a means for Moana Vā to foster relationships and connect with their community. During the drop-in session on Monday nights, the collective welcomes regulars and newcomers to join for a hot cuppa and a talanoa or chat. “It’s very casual and it’s an opportunity to get together with like-minded people,” Tuitaupe says. However, for safety reasons, the team doesn’t advertise the location publicly – they encourage those interested to get in touch with them on social media.

Attending koko nights is a chance to also get to know the team at Moana Vā. “It’s important for young Pasifika LGBTQIA+ to see others who look like them because we identified early on that a lot of our youth carry a lot of trauma and hurtful experiences without any support,” Tuitaupe says. “I wish a young Suli had a space like this back in the day.” Having youth voices on the team is crucial: Moana Vā’s youngest member is aged 18.

Another important part of their work will be educating the wider Ōtautahi community about Pacific history “because sexuality and gender identity was fluid back then before missionaries came ashore,” Tuitaupe says. “We believe that getting others to understand more about the Pacific and the rainbow community will help dismantle the stigma that hovers around our space.”

Christchurch Pride has begun and will run until 29 June 2022. For full event details, tickets and Covid updates, check out their Facebook page.