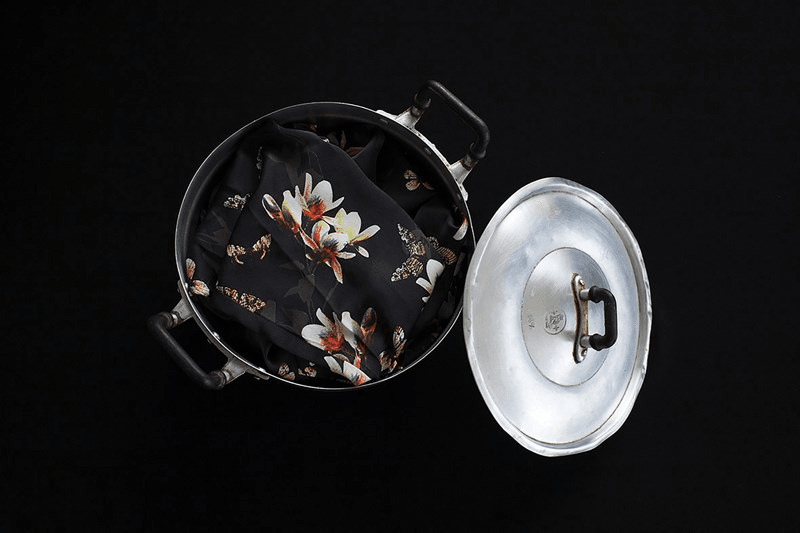 A soup pot from 1985, photographed by Kim Hak as part of ‘Alive’. Photo: Supplied

A soup pot from 1985, photographed by Kim Hak as part of ‘Alive’. Photo: Supplied

A mortar and pestle, a pair of scissors and a cooking pot are among the objects Cambodian refugees have kept with them since resettling in New Zealand.

Kim Hak grew up in Cambodia just after the fall of the Khmer Rouge regime, listening to his family recount their memories of the time. He heard his family share their experiences of the four year rule of Pol Pot and the Khmer Rouge during which an estimated 2 million Cambodians died from executions, starvation and disease. Many Cambodians were forced to escape across the border to Thai refugee camps before seeking asylum elsewhere. Knowing these stories needed to be shared, Hak was inspired to start an art series to remember and retell the social history of his country’s past.

The current project, shown at Auckland’s Objectspace, is the third installment of Hak’s work. He began the series by photographing the items his own family kept from the late 1970s and 1980s, including a common scarf, a buried photograph, and a kettle for cooking chicken. Later on, he began identifying places where refugees had relocated to, and connected with families in Australia in 2015 to create the second piece.

Now he is showcasing the stories of Cambodian refugees through the items they kept with them during the genocide and resettlement process, and that they still use as part of their lives in New Zealand. This installment is a photography collection of items from 12 families who resettled in New Zealand in the 1970s and 1980s, alongside a display of the items themselves.

“In 1975, when the Khmer Rouge took over and they forced people to leave the capital and the city, many people, most of the people, they abandoned all their possessions, and they ran from their home and they could carry very little things.” Hak says. Because they could only take a few objects, people prioritised the functional and practical things, and “abandoned their past story, their past memory.”

Objects featured in the exhibition include both personal and practical artefacts. There is a photograph that was developed after 17 years of the negative being carried through refugee camps in Thailand and Malaysia before arriving in Dunedin in 1988. There are scissors taken from a hospital, a mortar and pestle bought in a refugee camp and still used daily, and a soup pot given as a gift from a friend in a refugee camp who left to resettle in Canada in 1985.

Hak worked with the families to identify the memory of the objects, and each item is accompanied by the history of its origin, use and meaning to each person. Families involved initially questioned the project’s intentions because they didn’t see their experiences as valuable enough to be showcased. Hak says people are often reluctant to share their stories, but it’s important they do so before the knowledge is lost.

“Some young people that were born here, grew up here, they don’t know the history of their parents or their grandparents so they start to talk to each other between the old and the young.”

The stories are not only valuable to the Cambodian community, says Objectspace director Kim Paton, but because everyone should connect more with those in their community with backgrounds different to their own. Everyone likes to talk about how multicultural Auckland is, Paton says, but often fail to actively engage with diversity. “I think you don’t have to look too far to realize we don’t know a lot about the people who live around us,” she says.

“The opportunity to understand and share those stories is really important and I think maybe that gets lost a little bit in this kind of ideology around us being completely unified, and we actually need to allow space for our identities to be shared.”

It was crucial that the project maintained a Cambodian perspective, says Paton, which is why each item has a description and quotes from the owner.

Zoe Black, Objectspace’s Maukuuku Community Development Coordinator, says groups of refugees have visited the gallery and related strongly to the stories, despite coming from different countries. She says it’s humbling for people to know the “harrowing but uplifting stories” of those within their communities.

“These stories need to be told, they need to be heard by people, to understand the backgrounds of all the people working around you.”

This installment of ‘Alive’ is running until 21st July at Objectspace, supported by the Rei Foundation, before Hak will take the photography exhibition to the Bophana Audiovisual Resource Center in Phnom Penh, in August.