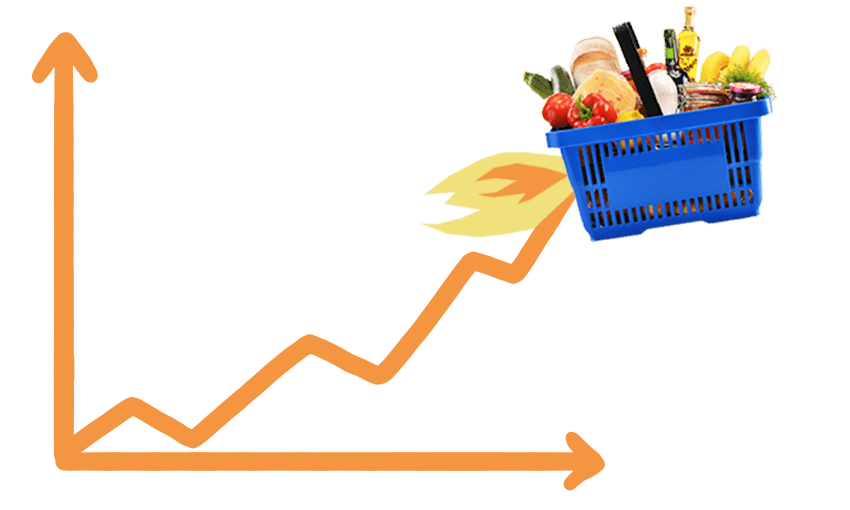 As food prices experience the highest annual increase in 10 years, it’s our most vulnerable who are suffering the most. Felix Walton looks at the causes, and what can be done.

You’ve probably noticed that your shopping bill is a bit higher than this time last year.

Stats NZ recently reported a 2.8% price rise across the entire supermarket catalogue. It’s the highest monthly rise in five years, and a result of the steepest year-long price increase since 2011.

“It’s not unexpected,” says AUT nutrition professor Elaine Rush, “and it’s been coming for a long time.” The combination of high rates of inflation, alongside a gradually tightening shortage of food around the world, means higher prices were almost inevitable.

“We have climate change, with floods and droughts,” she says. “That really impacts our ability to produce food.”

For most of us it means a higher bill, but for some it means living on empty stomachs.

“Food bank services are really stretched, and it’s getting worse,” says Rush. “As the price continues to go up, food banks are able to buy less and less.

“It either means they can feed less people, or that there’s less food between them.”

This is compared to a 13% increase across households with higher incomes. The sharpest cost increases were experienced by those least equipped to meet them.

“There are so many factors that go into it,” notes Rush. “There’s time poverty, meaning you don’t have enough time to prepare the food. Or a lack of education or equipment to prepare it.

“Food insecurity means there are days when you might go without food entirely.”

Even getting to the supermarket can be a challenge, especially without a car. “If you have a large family, the amount of vegetables you could be wanting to take home is pushing 20 or 30 kilograms,” says Rush, referring to the government’s suggestion that everyone eat at least five servings of veggies daily.

“Most governments put out dietary guidelines like 5+ A Day, but we’re not able to follow them,” she says. “The food supply policies just don’t back up what the evidence says we should be doing.”

While time and access are significant issues, the largest barrier is, unsurprisingly, cost. Stats NZ notes that the biggest contributors to this month’s price increase were fruits and vegetables. Larger price tags for foods like broccoli, lettuce and apples pushed plant foods up by 9.9%, a staggering increase best evidenced by tomatoes, which sit at $7.29 per kilogram compared to $2.94 last January.

Next was meat and poultry, whose prices rose by 3.6%. Meanwhile, confectionery and snack foods barely made a dent.

It makes sense that health isn’t the highest priority for people just trying to get by. “Most of the world is malnourished,” she says. “That’s not just a lack of vitamins and minerals, but also obesity.

“It’s an imbalance in food supply and access to it.”

As for a practical short-term solution, Bush suggests turning to long-life alternatives. “Tinned, canned, frozen and dried food are really good nourishment,” she says. “Milk powder works out cheaper and stores better, but a lot of the appreciation of dried foods is lost.”

While not the most exciting alternative, long-life products make a lot of sense for people trying to get the most out of their money. Especially for those trapped in isolation for extended periods.

Ultimately, though, a more fundamental solution is necessary.

“Unless we practise prevention, which includes feeding people well, our health system is going to be overwhelmed,” says Rush. “We have all these people with non-communicable diseases: cardiovascular disease, some cancers, diabetes, strokes, which could’ve been prevented if they were fed better.”

“I think the whole food system needs a complete makeover.”

But, Rush clarifies, that makeover can’t be at the expense of food industry workers. “Many of the workers in the food industry are the same ones whose families are suffering from food insecurity,” she points out.

Instead, the solution lies in addressing supply issues and forming a real strategy to make food more accessible. One suggestion from Rush is a market garden renaissance. “Every city should have market gardens close by that are able to supply that city,” she says. “That’s how cities and towns evolved.”

Right now, Rush feels that too much of our food policy relies on charity. “Food banks do a wonderful job,” she says. “But it’s a blight on our landscape that we need to have food delivered by charities.

“We should be working towards everyone being able to afford and follow our dietary guidelines.”