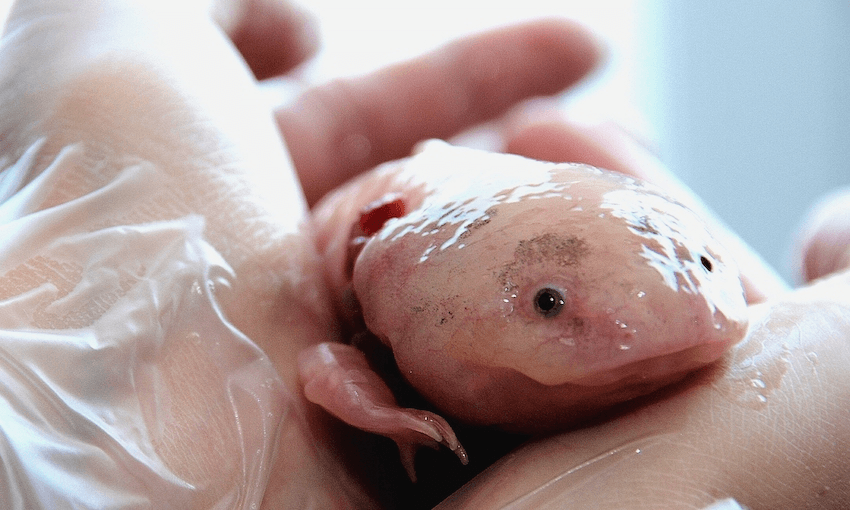 This little guy might look cute, but he’s more difficult to look after than you might think. (Photo: Getty)

This little guy might look cute, but he’s more difficult to look after than you might think. (Photo: Getty)

An amphibian that lives for 15 years and whose needs are almost impossible to meet in captivity makes for a terrible pet, warns Emily Writes.

If you’ve got a child who is Minecraft obsessed, chances are they’ve been talking about axolotls lately. A new update on the game means players can now make ponds and spawn axolotls in them.

This has led to parents around New Zealand (and probably around the world) facing daily breathless demands for axolotls. Axolotls are sometimes called Mexican walking fish, but they’re not actually fish at all. They are a neotenic salamander and belong to the amphibian family.

“We see a lot of pet trends when it comes to pop culture – gaming and television shows. We saw an increase in huskies being bought after Game of Thrones. Or thinking back – a rush on Jack Russells after the Telecom ads hit many decades ago. The sad thing is that once the trend is over, interest in animals wanes, yet they still need the same care and attention.”

She encourages parents to really consider whether they can take on a pet – including an axolotl. Axolotls, like huskies and “Spots”, are actually pretty hard to look after, Beattie says. They also live a very long time. She has advice for parents whose children are begging for a tank filled with the unmetamorphosed larvae of the Mexican salamander.

“Don’t do it. Don’t do it unless you can commit to looking after an axolotl for at least 10 to 15 years, and you can give it an enriched life for its whole life. Axolotls are going to be with you for a long time. You need to be prepared for that.

“You also need to understand that they’re not low maintenance. You need a large tank, at least 20 litres, that you clean regularly because they produce an enormous amount of waste. You also need a lid for the tank because they can jump out.”

Water flow in the tank is important too and needs to be set up to specific standards, as too much water flow or not enough can cause your axolotl to go off their food or develop a stress-related disease. Every day you will need to clean shit out of their tank.

Axolotls do not require lighting, and lighting can stress them out or overheat their tank. Their tank must stay 14–18°C. They’re divas basically. Slimy, gilled divas with no eyelids.

They will also eat each other if there is too many of them. But if they lose a leg, it will grow back. So, they’re not all bad.

“They can be great pets, but they aren’t great pets for everyone – and children need to know that they can’t handle an axolotl as they’re very delicate and they can get injured. They also need a very quiet home with a lot of space – children aren’t known to be very quiet”, Dr Beattie correctly says.

The SPCA’s scientific officer Dr Alison Vaughan says axolotls are classed as a non-traditional species in New Zealand, and they are not recommended as pets.

“They’re high maintenance, we wouldn’t encourage you to handle them, they need a quiet place, they need space, and they live 10 to 15 years. So in most cases – no, they do not make good companion animals.

“In most cases their welfare needs cannot be met in captivity.”

Before adopting a pet, potential owners need to ensure they can meet their pet’s needs, Vaughan says.

The SPCA also encourages people to adopt rather than shop.

While there are fears a film like Cruella might make people want to buy dalmatians, media has the opportunity to teach children to care for animals too.

In a December 2018 Minecraft update, pandas were introduced as part of a collaboration with WWF to raise awareness about the importance of panda conservation. In 2019, Minecraft introduced bees, highlighting the role in supporting healthy ecosystems.

Given their popularity as a pet, it’s surprising to learn that axolotls are critically endangered in the wild. Scientific American magazine says the axolotl is on the brink of annihilation in the canals of Mexico City, its only natural habitat. Captivity isn’t the answer, but maybe we can get our kids asking the right questions.