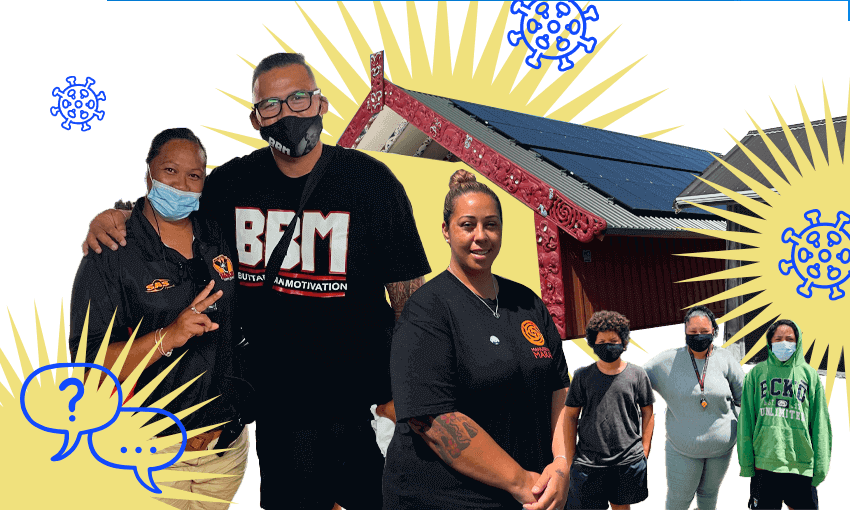 ‘We’re here if you need us’: Manurewa marae gets South Auckland boosted

As the country prepared to move into red, the Manurewa marae held one final mass vaccination event.

“Get boosted” was the recurring message from staff and locals at Manurewa marae’s mass vaccination event on Sunday.

The event, which saw 338 people across the day – including 104 children – get a jab, combined a Ratana church service with music, dance performances, free food and the chance for whānau to get vaccinated in a fun, family-friendly environment.

Among the attendees was South Auckland health and fitness proponent David Letele, aka the Brown Buttabean, who took the opportunity to get his booster shot. Those still feeling hesitant about getting the Pfizer jab for themselves or their children should start by staying away from Facebook, he said.

“Get boosted but don’t get your information online,” he said. “Instead, come down here and talk to a nurse or a doctor and have a conversation with the experts. But don’t go on social media or just talk to your mates.”

Letele, who also runs a large food bank service, said moving to the red traffic light setting will have a massive impact on both his social service and fitness programmes as he expects a number of his clients to catch the highly transmissible omicron variant.

“What’s stressful for me is knowing the extra pressure that will be on us to provide the food parcels to those self-isolating – and we’ve already got some requests coming through now.”

Valentine Hala was another who took the opportunity to get her kids vaccinated at the event.

“I work in the community and I’ve seen how quickly people get sick,” the mother of three said. “I’m fully vaccinated but I thought I’d bring my kids down. I gave them the freedom to make up their mind and they decided that they wanted to do it.”

Manurewa marae has been at the forefront of Auckland’s vaccine rollout, being one of the first sites to offer immunisations back in April 2021. And much to the relief of the marae’s 20-strong team of nurses, vaccinators and support crew, they were finally able to take a two-week holiday over Christmas.

But marae chief executive Takutai Moana Natasha Kemp said it was hard to switch off knowing they had to be ready for vaccinating children and providing booster shots by mid-January.

She said while she was pleased to see a number of children being vaccinated, parents shouldn’t feel pressured or shamed into vaccinating their kids.

“We vaccinated just under 60 children on the first day but the big thing for us as a marae is that we will awhi or support you with whatever choice you make,” she said.

“There’s lots of hesitancy with vaccines for our tamariki, and you see it especially on social media. But what we say here is this is your choice, as parents and whānau, whether you want to get your tamariki vaccinated or not. We have clinicians and kaumātua here if you want to korero and to have karakia. But our approach is a very soft one – we’re here if you need us.”

Kemp said the Manurewa marae has hardly been touched by the anti-vax protests that have affected some other centres.

“We’ve just had one protestor,” she said. “But the craziness of it was while he was handing out anti-vaccination letters and flyers, his wife was inside getting vaccinated.”

The centre’s clinical nurse lead Nicole Andrews said her team are doing everything they can to allay fears for children and parents alike, and thankfully there have been no serious adverse reactions for children.

“We’ve dedicated a whole section to children and we have two mums and some grandmothers as well, who are experienced with children with disabilities and those with intellectual disabilities, and we have them as the first person the child will see after their vaccination,” she said.

“We are trying to stay away from sugar and instead they get a little gift and a little certificate.”

As upbeat music blared, more people of all ages filtered through the gates to get their jab. Kemp said despite a lot being made about the need to increase vaccination rates in South Auckland, and particularly for Māori, she’s never felt the need to pressure people.

“For us here, we work under King Tūheitia’s mantle: ‘Amohia ake te ora o te iwi ka puta ki te whaiao – the health and wellbeing of our people is paramount.’ So that basically means we do whatever it takes to get our people across the line, in a culturally safe way, using te ao Māori approaches like tikanga, karakia and waiata.