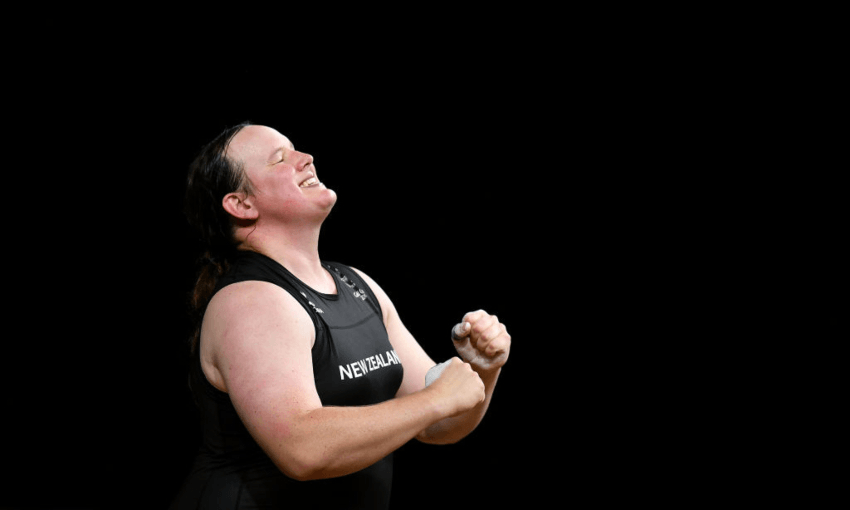 The trans weightlifter’s inclusion in New Zealand’s Olympic team has generated debate about transgender athletes and sport. But it has led also to a global conversation about how we design our systems to be safe and inclusive, for everyone, writes Laura Walters.

Kiwi weightlifter Laurel Hubbard is making global headlines after becoming the first transitioned athlete to qualify for the Olympic Games. The 43-year-old — set to be the fourth oldest weightlifter at an Olympics — has qualified for the women’s 87kg-plus category, and is seen as a genuine medal contender for Tokyo. Her qualification comes after what could have been a career-ending injury at the 2018 Commonwealth Games, when she suffered a broken arm.

The Aucklander, who is known to be a private person, returned to competition in 2019 and performed strongly in 2019 and 2020. Following the news her selection had been formalised, Hubbard said she was “grateful and humbled” by the support she’d received from so many New Zealanders.

“When I broke my arm at the Commonwealth Games three years ago, I was advised that my sporting career had likely reached its end. But your support, your encouragement, and your aroha carried me through the darkness,” she said. “The last 18 months have shown us all that there is strength in kinship, in community, and in working together towards a common purpose. The mana of the silver fern comes from all of you and I will wear it with pride.”

And while there has been support from athletes and the public — both in New Zealand and globally — there has also been questioning and criticism. Some of it amounts to bigotry and barely disguised anti-trans rhetoric. As a 2020 Human Rights Commission report highlighted, people in the rainbow community continue to face high levels of discrimination, and sporting and physical education contexts can be some of the most unsafe environments. “This is related to the highly gendered and binary organisation of some sports, and the overt homophobia, biphobia, and transphobia pervasive in these spaces,” the research found.

Others raise questions of fairness — particularly for cisgender women — and what the evidence says in regards to the physiology of those who have transitioned from male to female.

A third group hails it as a win for trans rights, and the inclusion of transgender and transitioned athletes in elite sport. Those in the supporting group include Hubbard’s Australian rival Charisma Amoe-Tarrant and Jacinda Ardern.

But former high-level cyclist Kristen Worley says this should not be viewed as a trans issue. This is a broader discussion about design and human behaviour. “This becomes an everybody issue,” she told The Spinoff.

Worley is a transitioned athlete, who was the first person to go through gender testing under the IOC’s 2004 rules. Under those policies she was physically, sexually and psychologically violated. She has since successfully brought a human rights case against the IOC and other international sporting bodies. As a survivor, Worley is now working with the IOC to overhaul its systems, and to create best-practices rooted in the principles of “do no harm, health and wellbeing, and connected ecosystems”.

The modern-day Olympic movement was designed by men, for men, and to entertain men, she said. “The issue is that women were never part of the discussion; diversity was never part of the discussion, because the design was eurocentric … Saying that somehow this is going to affect women and women’s sport has nothing to do with it. It’s the male executive design and colonial sport system … It has nothing to do with Laurel Hubbard, it’s a behavioural design issue of our system — it’s not a trans issue.”

Rather than trying to retrofit certain aspects of diversity (such as the inclusion of women, different ethnicities, abilities or trans people) into the existing system, Worley is championing a significant pivot of the Olympic movement — and sport, more generally. That means thinking about inclusion and accessibility at the front end of the design.

While much of the discussion around Hubbard’s selection has focused on whether she has an unfair physical advantage, there has been little discussion about the vision of the Olympics. The IOC’s website says: “The vision of the International Olympic Committee is to Build a Better World through Sport.” However, there have been a lack of policies to support this vision to date. Worley said that was now changing as part of soon-to-be-announced best practice guidelines that have been described as having the potential to “change human behaviour”.

New Zealand researchers also support a system overhaul. Following a 2019 University of Otago study, researchers recommended a radical change to what they described as “the outdated structure of the gender division currently used in elite sport”. At the moment, the system is reliant on comparing apples with oranges, due to a binary view of gender.

In order to qualify for Tokyo, Hubbard had to meet the International Weightlifting Federation (IWF), IOC and NZ Olympic Committee eligibility criteria, including IWF eligibility criteria for athletes who transition from male to female based on IOC Consensus Statement guidelines.

In 2015, the IOC changed their transgender guidelines, meaning athletes who transition from male to female can compete in the women’s category without requiring surgery to remove their testes – provided their total testosterone level in serum is kept below 10 nanomoles per litre for at least 12 months. While these guidelines exist under the guise of creating a fair playing field, Worley says they do anything but. The 2015 changes were in response to the legal challenges faced by the IOC, and were not based on scientific research, she said. The policy has been challenged by researchers who found a person who had undergone puberty as a male, retained a physical advantage.

But Worley said the poorly designed policy also put transitioned athletes at risk, by starving them of the hormone they needed to function and stay healthy. She likened it to running a car without gas — in an effort to force those with XY chromosomes to assimilate to those with XX chromosomes, athletes were unable to recover and eventually their bodies would fail.

Worley said there was a need for greater understanding and focus on the endocrine system, and how the disruption of the hormone feedback loops impacted athletes’ physical health, regardless of the level of competition. So, while the current policies mean athletes like Hubbard are able to compete, they also put those same athletes’ bodies at greater risk, introducing yet another barrier to inclusion.

These rules are currently being viewed within a discussion of a right to compete, as the mainstream lacked the language, understanding and articulation to discuss the broader issues of athletes’ safety and physical wellbeing, Worley said. “What we do with the gender question is that we’re hurting individuals. And we’re taking away from their sexual health, their metabolic health, their cellular health, and the multiple contraindications that are occurring in their physiology.”

That was not what success and inclusion looked like, she said. “That’s a design issue. We’re trying to fit a square peg into a round hole. And we’ve done that with multiple diversity issues, and what’s happening is it’s splintering all the way around.” Until bodies like the IOC showed leadership in this area, and helped educate other sporting bodies, and the general public, the conversation would continue to focus in the wrong direction, she said.

This is apparent in the recent spate of policies in the US, UK where there has been criticism of the inclusion of transgender athletes, ranging from concern over fairness for ciswomen, through to blatant anti-trans programmes.

In New Zealand, Sport NZ’s draft inclusion policy was met with pushback from more than 40 former Olympians, who say they are concerned about “fairness and safety in all sport”, arguing the guidelines ignored the rights of female athletes. This was swiftly followed by a petition calling for further consultation on the guidelines, which aims to address some of the barriers faced by roughly 50,000 trans and non-binary people face in playing sport.

The minister for sport, Grant Robertson, has been quick to say politicians should leave the creation of international guidelines to bodies like the IOC. He did, however, say he preferred an approach grounded in inclusion. “If we can all agree that we want all New Zealanders to have the opportunity to be part of sport … I think that’s a good starting point, and then we can work from there,” he told RNZ.

But in a select committee hearing on Wednesday, Robertson pushed back against some of the opposition to the Sport NZ, Hockey and Rugby policies, saying the issue of transgender inclusion in sport was currently being “conflated” and “grossly’’ exaggerated.

Worley said she supported many of the concerns being raised by athletes and commentators. “That is a natural response of not knowing.” It was now up to international bodies like the IOC to overhaul the way they designed their systems, and provide leadership for the rest of the world — something they had failed to do to date.

There was reason for hope, she said, in the direction the IOC and others like FIFA were headed, and in what that could do for society, more broadly. “Because the role of sport has this kind of network piece that can actually influence a greater society. And that’s what we’re trying to build: a movement.”