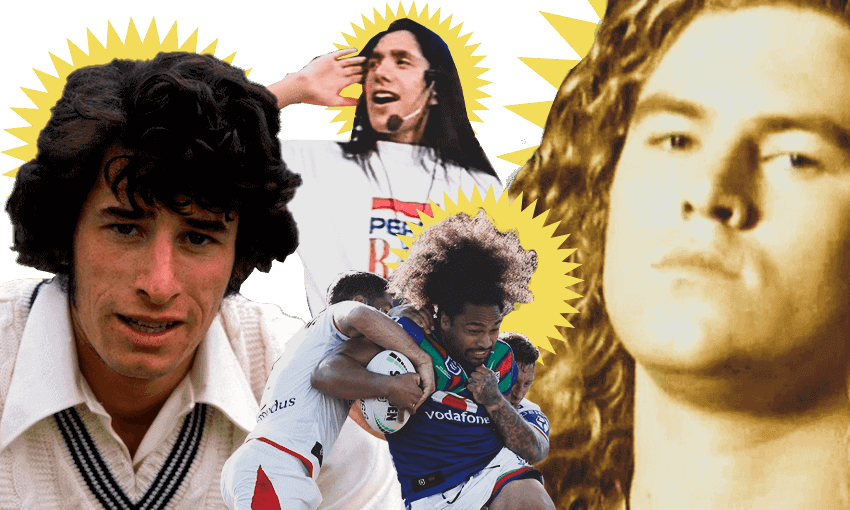 Today Aucklanders can go and get their hair cut for the first time in more than three months. But should they? We present the argument for letting it grow a bit longer.

“What are we thinking today?” the barber will always ask. For many New Zealand men the answer will be the same: “I want to look like one of the Peaky Blinders please,” they’ll say.

This is a scene that will no doubt play out across Tāmaki Makaurau in the coming days as Aucklanders flock back to their hairdressers for the first time in over 100 days. But while many blokes will be hell bent on having their lockdown locks buzzed and faded asap, others might not be so sure.

Maybe you’ve grown quite fond of your free-range barnet. Maybe you even think your hair looks better than it did before. Maybe for the first time in your life you are considering the option of “growing it out”.

What you need to know is that you are not alone. There are many people who secretly think men look better with longer hair. “I’m firmly of the opinion that 80% of New Zealand men keep their hair far too short,” one unnamed source with commissioning power at The Spinoff told me this week.

It has also been said that the first three months of growing your hair out can be the hardest. So to encourage you to keep going, we’ve gathered some of New Zealand’s finest scissors-only men’s hairstyles of the last 50 years as a sort of aspirational look book. Just think, this could be you if you give it another few months.

What happened in the 1960s that led a whole generation of New Zealand men to refuse to show their ears for the best part of a decade? Modelled here by New Zealand cricket legend Sir Richard Hadlee, the default New Zealand men’s hairstyle of the 1970s was really more of an anti-haircut, a look which endured well into the 1990s thanks in large part to Sir Peter Blake.

Many will point to Winston Peters as having the most consistently strong men’s hair in New Zealand public life over the last 50 years. He’s pretty good, but for me Rowles has always had the edge. Look at him here in 2009 and tell me you wouldn’t trade your current hair situation for this in a heartbeat. The lesson here: when in doubt, slick it back.

You’d look pretty pleased with yourself too if you just won a blue riband Olympic running race while also having a really good hair day. Many long hair advocates believe 1976 John Walker represents the optimum men’s hair length, and on this evidence it’s hard to disagree.

Go a little bit longer than Walker and you begin to enter vintage TK Samuels territory. On a less experienced head this can prove to be an awkward length, not quite long enough for a full ponytail, but once you get it right the results can be devastatingly handsome.

There’s one word that immediately comes to mind any time I think of RTR Countdown era Robbie Rakete, and that is Timotei. Push Push era Havoc, on the other hand, kind of vibes more Pantene. If you want hair as nice and long as these two early 90s idols, you’re probably going to want to use some form of shampoo on it too.

Taika Waititi has had a lot of very good haircuts in his life. This photo of a rare tied-back look from 2004 has been chosen simply because it offers two excellent men’s hairstyles for the price of one. Cliff Curtis demonstrates the upside of free-range curls here, but they also looked good tied in a bun. Compared to the ponytail or topknot, the bun is an underrated hairstyle for the longer haired man.

It takes time and dedication to unlock the elite level of long/curly hair, but the reward once you get there is obvious. Most would agree that Vodafone Warrior and Sāmoan international Bunty Afoa has the most formidable hairstyle in New Zealand sport right now.

But what if you only wanted to grow your hair out a little bit? For a more easy-to-achieve example of what we’re talking about, look no further than The Crowd Goes Wild’s James McOnie. This is perfect, timeless “just rolled out of bed” hair. This is probably more or less where your hair is at already. And it’s exactly the kind of thing people who believe “80% of New Zealand men keep their hair far too short” want to see more of.

When I was a kid I took this exact photo of cricketer Shane Thomson to the hairdresser as a visual guide of what I wanted my hair to look like. They rightly ignored it and just gave me the same haircut every other boy had in 1996. This is more of a reminder that longer hair also opens up a range of new accessory options, like the bandana. (See also: football legend Ivan Vicelich’s commendable dedication to the Alice band.)

From Shortland Street to Britney’s ‘Toxic’ video to Virgin River, I don’t think New Zealanders fully appreciate how much of a top tier international hunk/heartthrob actor Martin Henderson has been for the last two decades. Key to this, of course, is a signature haircut which helps him cultivate an alluring air of mystery. Is he a “bad boy”? Is he a “sensitive new age guy”? Both can be true.

Once you start looking, you’ll notice great men’s hair untouched by the blade of a clipper everywhere you go. Whoever your personal style icon is and however drastic your desired new look may be, we hope this collection has inspired you to continue on your journey to longer hair.