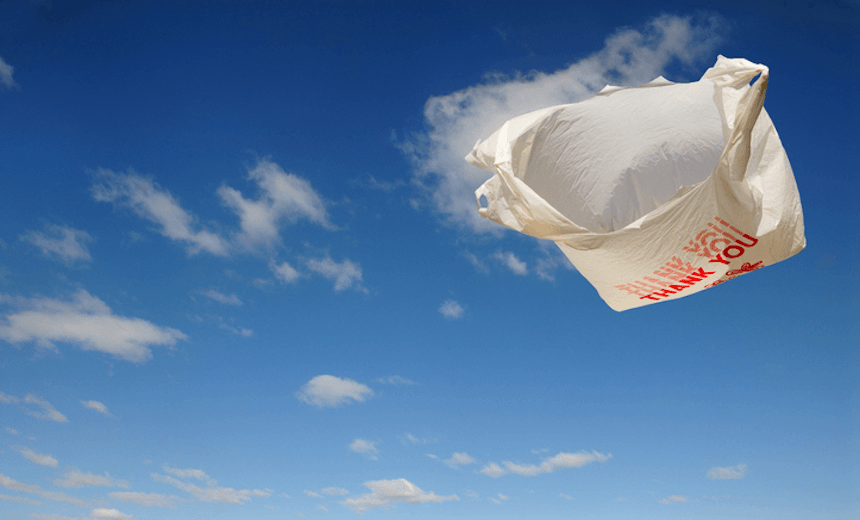 Nearly half our mayors have signed a letter calling for a compulsory charge on plastic bags, and surveys show strong public support for the idea. Still the government remains staunchly opposed. If other countries can do it, why can’t we, wonders Kristin Hall.

Update, 10 August 2018: PM Jacinda Ardern has announced that New Zealand will ban single-use plastic bags, phasing out their use over the next year.

Picture this: I’m sitting on a mattress on the floor of a squalid room as the dust swirls in the sea breeze outside my window. The smell of the leaking toilet is burning my nostrils. There is a large blob of snot on the wall about 30 centimetres from my head. It is very yellow. I wonder whether the person whose nose released the snot had recently had a cold. I reach for a bag I can breathe into for a moment’s reprieve from the general stench, but there are no plastic bags to hand. We’re in Morocco, and in Morocco, single use plastic bags are banned.

Morocco is a developing country; its people are mostly poor by New Zealand standards. The average salary is between $5000-$7000 a year, and as described, even some of the tourist locations leave a lot to be desired. So why does Morocco give two shits about plastic bags when there are hundreds if not thousands of people living in tents made out of old pajamas? Simple. There were just too many bags. Prior to the ban in July last year, Morocco was the world’s second highest consumer of the fluttery polyethylene demons (behind the US). Its 34 million people used 3 billion bags a year. That would make New Zealand’s 1.6 billion bags a year look piddly, if we had a similar population, but we don’t. Before the ban, Moroccans were using 88 bags per person per year. New Zealand’s 4.6 million people each use 348.

So why the hell are we still using them? Because you bought that fancy reusable one at New World one time but always forget to put it in the car? Because the Pak n Save boxes are always mysteriously soggy and liable to cause a tinned-good catastrophe on the way home? Because you thought, I’ll just put them in the bottom drawer in the kitchen and use them again but in reality someone left a carrot in one three years ago that’s liquefied beyond recognition so they all just go in the bin? Well I’m sorry team, but that’s not quite good enough.

Earlier this month the mayors of Auckland, Wellington and Dunedin sent an open letter to other mayors and the environment minister, calling for the government to introduce a levy on single use plastic bags. Yesterday came news that almost half the country’s mayors have now signed on. Phil Goff said if the government wouldn’t do it, it should give councils the power to impose the levy, which sounds like such a bureaucratic nightmare I got a headache just reading about it.

The beauty of the Moroccan ban is that it is wonderfully simple. Single use bags are bad, so you are not allowed them. The rule is reinforced on highways, with pictures of plastic bags on billboards circled and crossed out like wanted criminals. Want a plastic bag at a supermarket? You’re out of luck: it’s paper, a reusable fabric bag or nothing. You can still get the banned versions at some regional markets, where the rule is harder to impose, but given the government is seizing the machines that make them and arresting those involved in their importation and manufacture, it’s likely that won’t last long.

So what do those in power think about a ban on single use bags in New Zealand? I asked the associate environment minister Scott Simpson, who’s in the process of setting up a working group to reduce plastic bag consumption.

He agreed that a system where councils made their own rules would be too complicated, but added that his preference would be for a “voluntary nationwide process rather than heavy-handed regulation” which sounds an awful lot like a fancy way of saying “let’s do as little as possible and hope for the best.”

I asked for further clarification on the voluntary nationwide process, and this was the answer.

“This is still to be discussed and worked through with the working group, however this could include voluntary agreement by industry to reduce plastic bag use through measures such as a levy. The government could also encourage and facilitate the scaling up of current work including initiatives funded through the Waste Minimisation Fund to reduce litter and increase recycling infrastructure.”

The problem with that is, not even all government imposed levies work long-term, let alone voluntary ones. There are levies in England, Wales, Scotland, Ireland, and several states across the US. Studies boast that plastic bag usage in Ireland dropped by 90% after the introduction of a 15 euro cent charge in 2002. But the levy had to be raised to 22 euro cents after plastic bag use began to increase again. Likewise in South Africa, which introduced a levy a year later in 2003 – after an initial drop, use is increasing once more.

In New Zealand stores make their own rules. A flimsy single use bag will set you back 10 cents at Pak n Save and the Warehouse, but due to our incredible laziness (and the aforementioned Pak n Save soggy box problem) it’s not much of a deterrent, and you can spot bags from those stores floating down your local stream at approximately the same rate as the other ones.

Not many countries have been brave enough to completely ban the bag, France brought its ban in at the same time as Morocco; Rwanda did it way back in 2008, and the capital Kigali is now considered to be the cleanest city in Africa. You’ve got to wonder what New Zealand would lose by following suit.

Is our little island paradise facing the same problems with rubbish as Morocco? Not quite – there you can barely go anywhere without the constant company of wrappers, bottles and tins. But although sun-faded scraps of plastic still flap like banners from the trees, it’s comforting to think there won’t be any new ones to replace them. Morocco is trying, and in a country like New Zealand – rich-ish, clean-ish, green-ish and mostly free of snot on walls – we could be doing a hell of a lot better.