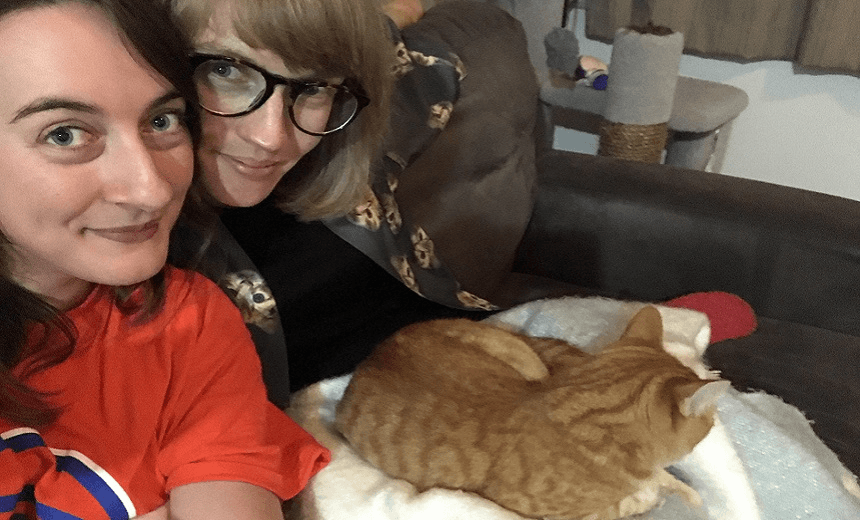 Celebrating our vets on World Veterinary Day: The story of Daniel the cat

World Veterinary Day is tomorrow, 29 April. To celebrate veterinarians and the pets we love, here’s the story of Daniel, his survival, and the very special home he has with Amy Wilson-Hughes and her wife Frith.

It’s 2am, and my wife’s phone is ringing. Groggy, she answers the call and places it on speaker.

It’s the hospital. The nurse on the other end has a kind, gentle voice. He tells us that Daniel is not doing so well. He wants to know whether we want them to do CPR, if he dies. Yes, we tell him. Yes, please save him.

An hour later the phone rings again. It’s the same nurse, and my stomach twists. Daniel is still alive, he tells us, but they need to do a medical procedure right now if he’s going to make it through the night. It’s going to cost hundreds. Yes, we tell him again. Do anything.

We’d decided on Daniel’s name before we even met him. We were watching old episodes of 30 Rock a week or so before our scheduled trip to the SPCA, and in one episode Tracy Jordan made a little friend out of cheese to comfort himself when he was upset. He named it Daniel, and it was decided. Our new wee friend would be named Daniel, too.

At the SPCA, we found him. He was two years old, but tiny – he’d never had a home, and his skeleton was small due to malnourishment. He was arranged so awkwardly in his basket that he looked like an imposter, a wee cat-shaped alien trying to fit in. They’d accidentally called him Sebastian, but we knew straight away that his name was actually Daniel and that he lived with us, now.

He got the flu a couple of days after we brought him home. He sneezed blood all over the walls of our rented flat, and I would drive home in my lunch breaks to check that he was alive. We took him to the vet the first three weekends we had him: antibiotics, different antibiotics because the first kind made him throw up, eye ointments, painkillers. Every time he would cry and scratch at his cage the entire way to the vet, but be perfectly calm on the way back. I always thought he feared we were taking him back, and relaxed once he knew he was coming back home with us.

There were two framed photos of him at our wedding: one on the signing table in the ceremony, one on the head table at the reception. We had never meant to become those people: it happened without our consent, and we didn’t know how to stop.

We knew there was something wrong with him the moment we woke. He wasn’t in his usual position outside our bedroom door, and he didn’t come jogging at the sound of it opening. He was crammed into a corner of the spare bedroom, eyes black, swaying on the spot. We brought everything to him: his food, his litter, his favourite green woollen mouse. He ate a little, then squatted in the litter tray and cried. I remembered hearing a cat cry in the night, but it stopped and I’d fallen back to sleep. Guilt squeezed my chest as we loaded him into his cage. This time, as we drove, he was silent. “I think he’s been hit by a car,” I told the vet receptionist en route to our local clinic. “Something’s really wrong.”

I was 50% correct: something was really wrong, but he hadn’t been hit by a car. Our vet showed me the pads of his feet which were perfect, pink little beans. “They’d be torn and bleeding if he’d been hit by a car,” she told us. She told us it seemed as though there was something wrong with his bladder, but that she was limited in what she could investigate because he’d just eaten. He wouldn’t be able to have a general anaesthetic until the next day, but she’d do whatever minimally invasive procedures she could in the meantime. The next day, though, the news was worse. Daniel was going steadily downhill, and needed to go to Cat Hospital. I felt a brief moment of delight in the fact that there was a Cat Hospital, and then the weight that had been living in the pit of my stomach returned.

The man who saved our cat’s life is named Damian. He called us from the hospital the morning after the night the nurse called twice, and told us that there was only one procedure that could save him. He was kind, but honest: he talked us through the costs (thousands), the risks (multiple), the recovery process (long), the prognosis if surgery was successful (excellent). He told us that if we couldn’t afford the surgery, that we should put Daniel down that day, because without it he would die. We asked for more time, and he gave us a few hours. As it turned out, a few hours was all we needed: the internet came to our rescue, his surgery was crowdfunded, and when Damian called back we were able to tell him yes. When we first met Damian he wasn’t sure we’d be taking Daniel home, and he spent a long time with us helping us through that. When we were able to tell him that he should go ahead and do the surgery, I heard genuine relief in his voice. He truly wanted to save our sweet boy’s life. And he did.

Every now and then, we’ll catch each other’s eye and say “Remember when Daniel almost died?” Then we scoop him up and hold him between us, pressed between our chests.

Tomorrow, 29 April, is World Veterinary Day. The New Zealand Veterinary Association is collecting personal stories to celebrate our veterinarians. This is one of those stories. Share your story on Facebook or Twitter with the hashtag #WeLoveOurVet