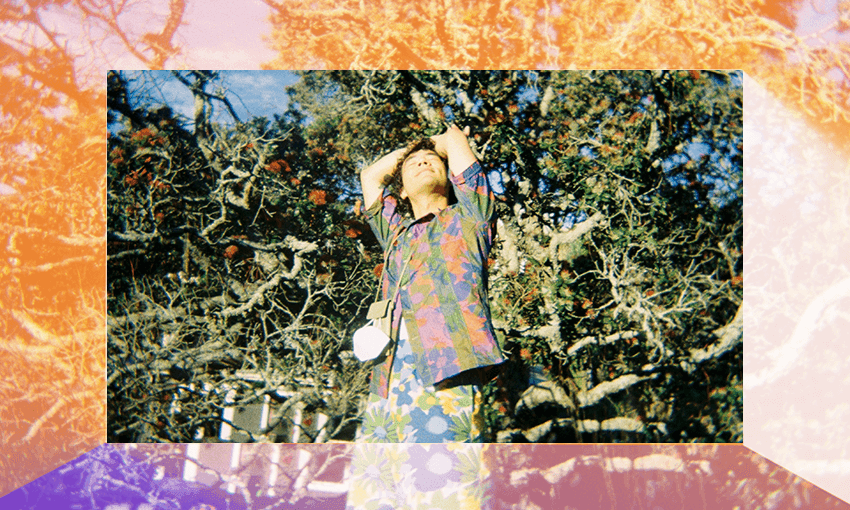 Designing an art exhibition sounds like cold work, but the reality is anything but. Sam Brooks talks to designer Micheal McCabe about two exhibitions he recently designed, and his soft, human approach to the form.

We’re all familiar with the concept of an art exhibition, where an artist or curator showcases a range of works that belong and exist together. However, less familiar is the process of designing the space where the audience meets the art. Less familiar, but no less crucial – it literally sets the terms of engagement, and builds a bridge between the work and the audience it hopes to meet.

This is what designer Micheal McCabe does, among his other set and furniture design work. “I’ve always seen myself as a facilitator for who I work with, collaborating with artists to support their work,” he says. “I’m really interested in the work providing a background, but not as one that diminishes or disappears, but supports the work and pushes it further.”

In a delightful coincidence, two exhibitions designed by McCabe happen to be on in Tāmaki Makaurau at the same time: Twin Cultivation, part of the Auckland-wide Satellites programme, and twisting, turning, winding: takatāpui + queer objects at Objectspace.

Both projects have been a long time in the making, mostly due to (say it with me one more time) the Covid-19 pandemic. This shifted the way McCabe thought about the projects, particularly Twin Cultivation, an exhibition based around artist Cindy Huang’s work examining the relationship between tauiwi, specifically Chinese migrants, and tangata whenua. “I was thinking about being in a public space where you are inviting strangers to talk to each other, which can seem, even now, incredibly precarious or unsettled.”

The work involves two strangers meeting, having a conversation, and gifting each other a ceramic they’ve “harvested” from a miniature garden in a public space. In total, 240 handmade works will be created and gifted across two sites in Britomart and Panmure.

The exhibition is part of Satellites, a series of public events showcasing contemporary Asian artists in Tāmaki Makarau which was borne out of conversations with Auckland Council in 2018. Satellites director Rosabel Tan actually gave the Pākehā Filipino McCabe his first job out of architecture school after seeing his first installation about queer nightclubs, Tracing Steps on an Empty Dancefloor.

“I would say that I’d haphazardly built it over a year, while situating myself not just as an architectural designer, but as somebody who draws up space, is active in the making of it,” he says. “I was really thinking about an embodied experience of making and designing that space, particularly as a queer person. Rosabel saw that and took a gamble on me.”

That work led to other projects with Satellites, including the 2018 Best Design award-winning The Claw, a life-sized claw machine in Northcote Town Centre. Now McCabe is part of the core Satellites team.

For him, Twin Cultivation is about welcoming people into a softer space within a public thoroughfare, encouraging people to get to know each other and have a conversation about the ceramic food they’re harvesting. The locations of Panmure (where it runs until this Sunday, July 3) and Britomart (where it runs until July 16) are very deliberate choices, with both having historical significance as sources of food.

McCabe was interested in activating those qualities, especially when it comes to the transitory nature of both spaces. “There is an unintended parallel, I suppose, in terms of it being a temporary installation, and being one that people pass through,” he says. “This installation is a moment of connecting quite diverse groups of people, using these nodes to which many different people across Tāmaki Makarau can come together and maybe more likely than not, share a moment with a stranger.”

“If, at the end of Twin Cultivation, someone has had a conversation with a stranger, they’ve been able to be seen and identified in someone else, and see that the process of exchange can maybe shift the ways they think about the land and their connection to it, that’s something I’m really happy and proud of.”

And then there’s twisting, turning, winding, which runs at Objectspace until August 21. “It’s quite an ambitious show,” says McCabe, putting it mildly – it involves nearly 50 different queer artists, almost the same number of works, and very few of the same type of works.

The artists are drawn from the fields of design, craft, and art, architecture and the objects range from things those artists have made, found, or been gifted. The breadth is truly remarkable, ranging from Layne Waerea’s acrylic painting on cardboard MĀORI LOVE HOTEL, an acrylic painting on cardboard, to Reuben Paterson’s arrangement of amyl bottles, titled One Nostril at a Time.

This collaboration came out of a work that he and artist/curator Richard Orjis put on in Albert Park called The Queer Pavilion. That work, which involved a wide range of artists presenting exhibitions, performances and other installations, happened at the site of Aotearoa’s first public Gay Liberation protest led by Ngahuia te Awekotuku in 1972. In a way, this new exhibition at Objectspace is a continuation of that work.

Orjis found the process of working with McCabe a delight. “He tends to glide into spaces with a disarming sunny, whimsical disposition,” he says. “But underneath it is a stealthy resolve, incredible work ethic and a steadfast belief in his creative ability.”

As a designer, McCabe is always trying to acknowledge what the work is, and respond to it accordingly. This particular exhibition required him to carefully place over 50 different works in conversation with each other. “It’s me again, thinking about the position I hold, and what that means within the context of New Zealand as tangata Tiriti”, he says, “and how we can all start to respond to those intersections within a realm of queerness.”

The thing that surprised McCabe was how the works formed relationships between each other – how certain objects would tell a different story when placed in relief to others. He calls it a temporary archive of queer work, pulled out from people’s bedrooms, lounges, garages and even from old cruising spaces. One of the exhibition’s most immediately striking objects, in fact, is a door from a cruising space in Dunedin, courtesy of artist Shaun Thomas McGill.

Kaan Hiini was the takatāpui and community advisor for the exhibition, providing support for the kaupapa and facilitating connections where he could. He has nothing but praise for McCabe’s work on the show: “Finding space for and organising 50 or so objects in a way that facilitates connections and relationships with each other, without letting the weight of those objects feel chaotic and overwhelming is a monumental ask.”

“Yet Micheal managed to do so in a way that felt appropriate for the community and the subject matter. He has allowed for a fluidity and openness that guides you around the exhibition in an instinctive way, that suggests connections but doesn’t force them – he lets the audience discover relationships between items on their own.”

McCabe has tended to downplay his own artistry, or his role as an artist in an exhibition context, saying that he was simply a service provider. Recently, though, he’s starting to reflect on it more. “At 28, I thought I would know who I am, but as a designer, I’m still growing and learning. Now I’m much more interested in how a person feels after they’ve experienced the work, what are they taking away from it?”

“I don’t necessarily need to know what that is, but I need to understand that the design is doing something for someone, rather than just being an object that we put away and never exists again. That it continues through people, through the experience, the way they think, approach, relate, connect to the world and to each other.”