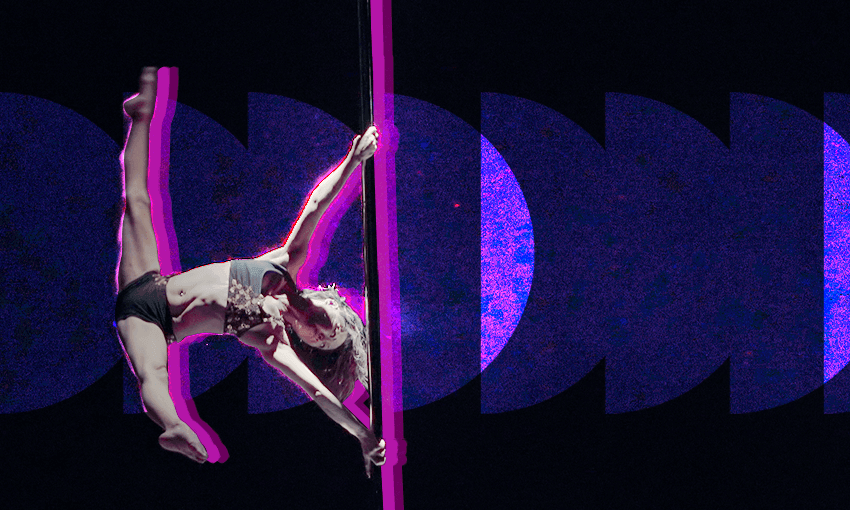 Stuck in an unhappy marriage in a brand new country, Koko Ibaraki picked up pole dancing as a hobby. A decade on, she is aiming to be a world champion at 50 years old.

The chunk of flesh was hanging off her arm like a piece of chicken skin. It was performance day in Hamilton, and Ryoko ‘Koko’ Ibaraki has just ripped her armpit open after sliding down the steel pole at speed. It was bleeding profusely and was evident she would need stitches. “Everybody goes, ‘Koko, you can’t perform with this’,” she recalls. But Ibaraki was determined. Her friends and family had travelled from Auckland to watch her perform, and she didn’t want to let them down. She bandaged her arm up, took “a lot” of painkillers, and took to the pole to perform.

A decade or so earlier, Ibaraki’s life looked very different. She was a young mother living in Japan with her husband and two young children, working as the in-house translator for a US pharmaceutical company. “Life in Japan was busy,” she recalls. “Get up early in the morning, get the kids to the crèche and school, go to work and then come back, then get dinner on the table and then go to sleep.” She travelled a lot for work – sometimes for eight weeks at a time – and began to get more and more weary of raising two children in Japan.

“Japan is not a bad country, but I just wanted them to enjoy more than just settle,” she explains. Wanting to move to a country that spoke English, she chose to relocate with her family to New Zealand – “the middle of nowhere”. She had never even moved cross-country before, let alone across the world, so life in Aotearoa was a big adjustment. “Everything was new and then it was quite a big difference,” she recalls. “People said that I was doing so well, but it was a struggle inside.”

It wasn’t just the new location that was causing disruption in her life, as Ibaraki found herself in the role of full-time mum for the first time in years. She quickly realised that work had become a defining part of her identity, and without it she struggled to know who she was. “You should be proud of being a mum, but it’s just a different lifestyle too,” she says. “I went from way too busy doing work to full-time mum looking after kids.” When she had a moment to herself, Ibaraki had a startling realisation – she didn’t know who she was anymore.

“I got more miserable and then felt numb, and then even depressed. I was just miserable all the time. And that would be affecting my kids because mum is being depressed and miserable.”

One night out in central Auckland changed that forever. After striking up a conversation with two women in a CBD bar, they revealed that they met each other “at pole”. Ibaraki was curious – she had never heard of pole dancing as a hobby, but accepted their invitation to come to the bar where they practised. As she watched the women take to the pole, she remembers it being the most beautiful thing she had ever seen. “It’s art, like when you go to an art gallery or something, just stunningly beautiful.” She was sold, and immediately signed up to pole classes.

Nothing could have prepared Ibaraki for both the challenge and elation of that first pole lesson. “Behind the scenes, it’s a lot of strength,” she explains. Pole dancing requires a tremendous amount of upper body strength to lift your weight up in the air, as well as flexibility to get moving around the pole. After her first class, she was so physically exhausted that she paid for her petrol at the pump and then drove away without filling up the car.

As tiring as it was, Ibaraki quickly became obsessed with the pole. She befriended a local bar manager that had a pole on his premises, and practised there on the weekends. She visited different strip clubs every weekend, inspired by the variety of dance styles. For both Ibaraki and her fellow champion pole dancer Michelle Kasey, it remains crucial to acknowledge the origins of the sport in stripping. “The reason that pole is so powerful is because women and non-binary folk want to feel that sexual ownership that strippers have,” Kacey says.

“People think I don’t like to pole dance,” laughs Ibaraki. “But I’m a little bit naughty. I’m on the pole. I feel sexy. What’s wrong with being sexy?” Wanting even more time to feel that energy and finesse her skills, Ibaraki purchased a pole and installed it in the living room of the home she shared with her husband and two young adult sons. “They didn’t say anything when I started,” she says. “It’s just like, ‘oh, mummy is happy, so let her play’.”

And mummy was happy. “Pole was my release of depressed or miserable or negative feelings. You don’t think about it, because if you do, you fall. So it was a great release for me.” Her husband, on the other hand, didn’t say “anything much” about her new hobby that had given Ibaraki some much-needed clarity about the direction her life was heading in. “When pole came into my life I focused on myself and it gave me the energy to think clearly,” she explains. “I decided to get a divorce.”

Two years later, the amount of time legally needed to be separated to file for divorce, Ibaraki threw a divorce party with her closest friends in her backyard. The pole made it outside too, along with a “freedom cake” printed with a picture of her face on it. “It was this great party,” she laughs. “Everyone should have a divorce party.”

This wasn’t the only moment of self-realisation that pole inspired – Ibaraki also quickly learned that she was much more competitive than she previously thought. Entering her first pole competition, Miss Pole New Zealand in 2011, she remembers being “very nervous” before starting her performance. “But once I was on the stage, it felt good,” she says. “I was really rushing and I felt great.” She placed third in the competition, and immediately signed up for another one.

Aside from “working and sleeping” Ibaraki was devoting her entire life to pole, using each competition as a goal for her training. Until 2016 she was constantly competing around Aotearoa, with her two young adult sons Takayaki and Kaito coming along to watch. “They’re very supportive,” she says. “They know how passionate I have been with pole so never have any negative comments like ‘oh mum, you are embarrassing’.” Takayaki says his mum’s determination is nothing but inspiring.

“It doesn’t matter what your age is or what’s happening in your life, if you really care and you put the work in you can achieve the greatest things.”

Soon, Ibaraki set her sights internationally. After winning the national title in 2015, she began to travel to different competitions across the world, seizing the opportunity to have what she calls “a pole-iday”. She visited the likes of Italy, London and Japan to compete. In the World Pole Sport Championship, she came second in her category (“and, supposedly, in the world”, she adds). At the age of 42, she became the recipient of the Ultimate Legends Award at the Pole Legends NZ competition, the highest local accolade in the sport.

A decade has passed since Ibaraki had that first pole lesson. In that decade she has become a world class competitor, opened and closed her own pole dancing studio – “I stopped the business side and I just do it for myself” – and even taken an extended break from the sport. The pandemic cancelled all the international competitions in 2020, leaving her to focus on conditioning her body with yoga and crosstraining for when the world opened up again. “Anything that I do for my body is to be better at a pole,” she says.

Ibaraki is looking forward to returning to competitive pole, reflecting on the changes that she has seen in the sport over the last 10 years. “It’s recognised as more mainstream,” she says. “In the world competitions, the youngest starts at nine years old up to 80 years old. So pole is for literally everyone.” She’s now working towards returning to the sport at the Pole Legends competition in 2023, at which point she will be over 50 years old.