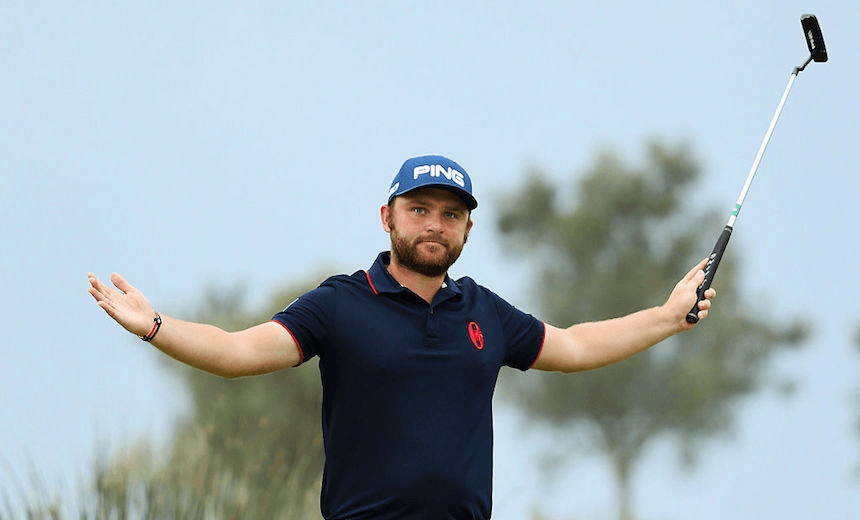 Among the identikit beefcakes and banal platitudes of professional golf, one player stands out. Greg Bruce salutes Andy Sullivan, the golf world’s most likeable man.

Men’s golf today is full of lean, ripped young muscle gods in tight polos, arriving on tour in their late teens and early 20s, smashing it 350 off the tee with their bomb-headed drivers, born to win, with bodies built in pursuit of athletic perfection and personalities so pleasantly bland you have no choice but to like them, which kind of makes you hate them.

Tiger pioneered all this and it was fine for a while, when we all still thought he was a good guy, before we found out he cheated on his wife and treated Stevie like a slave. He was a man of his time and we held him up as the hero who resurrected the world’s interest in golf. But who’s our hero now that we know Tiger can be an asshole and he’s barely good enough to make Howick’s weekend pennants team?

Jordan Spieth? Obviously not. Too nice. Rory McIlroy? Too nice. Jason Day is Australian, Bubba Watson is too old, and so on, down the top ten.

Ideally, a hero needs to be several things: brilliant, likeable, gifted, fun-loving, like us, not too threatening, unique somehow, but not in a ‘look at me’-type way.

The first time I saw Andy Sullivan was on the highlights of the third round of the European Tour’s season-ending DP World Tour Championship in Dubai, which he was leading. He made a killer putt for birdie, then walked, with both hands cupped behind his ears, toward the gallery, where his team of about 20 or 30 supporters, described by the commentator as the “Sully Army”, were all dressed in matching white t-shirts with giant yellow smiley faces on the front.

I wasn’t sure about all this. Sullivan, who I had never heard of, seemed a bit too cocky for my liking. Who did he think he was? But the more I saw and read of him, the more I grew to like him. In fact, I think I am beginning to fall in love with him. Could Andy Sullivan be golf’s saviour? Almost certainly not.

He has dreamy, slightly wide-set eyes and a face shaped a little like the head of a shovel. He is short and a bit fat. He walks like he’s on his lunch break – a casual punch in the face of the efficient, aggressive strides affected by most pro golfers.

At 20, an age by which both Tiger and Jordan Spieth were already rich, with PGA tour titles to their name, Sullivan was working at Asda, stacking shelves. Asda was, for 13 straight years, including the years he worked for it, the cheapest supermarket in the UK. He turned pro four years ago at the almost comically late age of 25 and for two years running he just scraped through qualifying school onto the European Tour.

He is almost always smiling. That’s why the Sully Army were wearing the smiley face t-shirts. They are mostly his family and friends from his local golf club in Nuneaton in the UK and he interacts with them unselfconsciously during tournaments, like he doesn’t care about the buttoned down protocol of golf. He doesn’t do this in an arrogant way, but in the way of a man who knows what it is to stack shelves at Asda.

He met his caddy, Sean Mcdonagh – ‘Macca’ – in Burger King at Manchester Airport. I know no other details about that interaction, but this is how I imagine it: Macca is working behind the counter when in walks Sully, wanting a quick bite before his flight to Mallorca. They have a bit of a laugh about the name ‘Whopper Jr’ and the next thing they know, they’re walking up the first at some rich-ass tournament. “What have we got to the pin from here?” Sully asks Macca. “What’s a pin again?” Macca asks and they laugh for ages, then Macca says, “No, really.” As the camera zooms in on his yardage book, we discover it’s actually a copy of Loaded. Sully puts his head in his hands, then laughs and claps his mate on the back. “You’re alright, Macca,” he says, then sticks a five iron to within 10 feet of the flag.

Prior to this year’s US PGA Championship at Whistling Straits, a television interviewer followed Sullivan while he played a practice hole. Arriving at his ball for his second shot, they came upon Mcdonagh, who was shambling around in the vicinity of the ball while Sullivan waited for yardage: “Macca’s here but he still doesn’t have the number, that’s the thing,” Sullivan said to the reporter, laughing.

When he was recently asked by another reporter what he and Mcdonagh talk about on the course, he said it’s mostly banter and dialogue from movies like Talladega Nights and Anchorman. He said the first thing he noticed about his caddy was how much he looked like American golfer Todd Hamilton, “So I was just not quite sure really,” he said.

Sully seems so like us, or like we imagine ourselves – trying hard and getting nowhere – but he is actually much better than us. His swing is a thing of calm, compact beauty, his face displaying the lack of effort required to hit his characteristically long, straight drives and sweet irons.

He won three tournaments on the European Tour this year, more than any other player, and he finished second in Dubai, one shot behind Rory McIlroy, following an extraordinary final round duel.

Now 29, he’s clearly in awe of younger, higher-ranked guys like Spieth and McIlroy, and not in that falsely humble way of so many pro golfers. It’s clear he’s surprised to be here. In a world where most players are more like Davis Love III than they care to admit, Sullivan is an ambling, shambolic anti-hero.

This is my dream and I’ve always wanted to do it,” he told the media during the Dubai tournament. “If I can’t enjoy that, what can I enjoy? I couldn’t imagine doing anything else. So if I can’t enjoy it, I’d best go and do something else; go back to stacking shelves.”

You can imagine it. It doesn’t seem that far off. But neither does the Masters.

Watch Andy Sullivan and all the stars of the PGA, LPGA and European Tour on PGATOURLive.co.nz