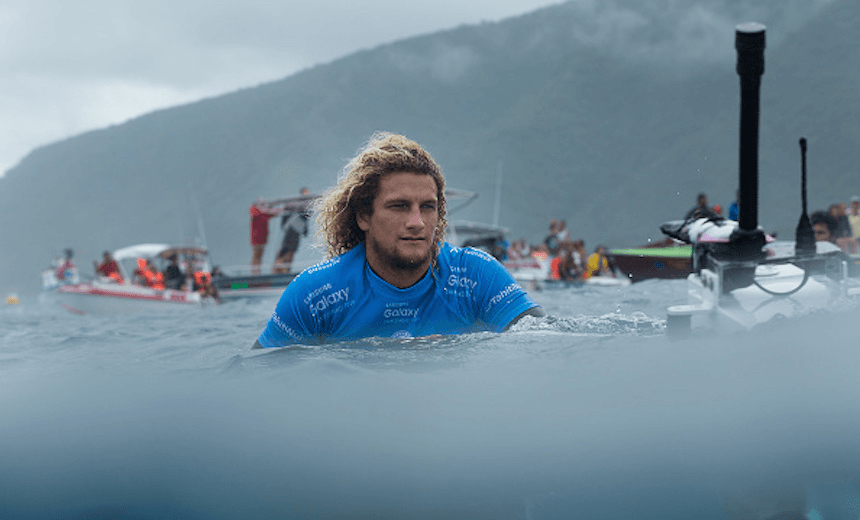 There are no guarantees on the Pro Surfing Tour as New Zealand’s Ricardo Christie found out in his debut WSL season. Heading into the final event of the year, Christie will surf for his tour survival and, as Ben Stanley discovers, he could do with a little luck.

Sleazy, funky and doused in a brash sense of self-pity, Albert King’s ‘Born Under a Bad Sign’ is about as true as the blues gets.

Recorded at Memphis’ legendary Stax Studios in 1967, the hit track went on to be covered by Etta James, Cream and Jimi Hendrix – and become a solid standard of the genre.

In the song’s second verse, King growls ‘If it wasn’t for bad luck, you know I wouldn’t have any luck at all.”

In sport, it’s hard to ignore Albert King’s lament, and the function of luck, and the way it can change an athlete’s – or team’s – momentum.

You can get dropped on zero in a cricket match, and go on to make 200. You can sink a three-point bucket in basketball, and kickstart your spluttering side on a ten-point tear. Remember that time your golf ball bounced off a tree and onto the green? Or into a sand trap?

With only next week’s Billabong Pipeline Masters in Hawaii remaining this season, Christie – the first Kiwi to make the top tier of men’s pro surfing since Maz Quinn in 2001 – sits 30th on the World Surf League ladder.

To make the following year’s tour, surfers must finish in the current season’s top 22 or in the top ten in the Qualifying Series (QS).

Two wildcards are also possible, but for someone like Christie – who sits a yawning 7000 competition points behind 22nd spot, and way out of the QS standings – only a Hail Mary appearance in the final in Hawaii will salvage the season.

It all could have all been so different.

Take the J-Bay Open in South Africa in July. In the second round of competition, Christie scored a collective total of 18.13 from his two top waves in the 20-minute heat. That score would have seen him stroll into the next round in ten of the other eleven heats. Unfortunately for the Kiwi, his two-man heat happened to be against a red-hot Joel Parkinson, who scored 18.84.

The same thing happened in the second round at the Fiji Pro. Christie scored 17.47; enough to get through in nine other heats. Not his, though – Jeremy Flores would nail a 17.70.

There’d be second round exits after strong showings at the Rip Curl Pro at Australia’s Bells Beach in April, and the Quiksilver Pro in Landes, France in October, too. In short, every time Christie laid down a king this year, someone else seemed to pull out an ace. Any chance of momentum was gone.

Unlucky? A victim of circumstance? Maybe. But when The Spinoff spoke to Christie in San Clemente in September, just days before the Trestles round of the WCT – another second round defeat – Christie didn’t want to feel sorry for himself.

“People have said that, but I’ve done it for so long that I know it happens,” the 27-year-old Kiwi says.

“I’m not really worried about that – it’s on to the next one. Live in the now, don’t live in the past – it will hold you back.”

It was typically circumspect stuff from the laconic, super-chilled Gisborne lad, who has been mixing it with Kelly Slater and Mick Fanning this last year.

A little later on in conversation though – when talking about the differences between ruthless two-man second round WCT heats and slightly gentler route through the QS – a hint of shoulder-shrugging annoyance appears.

“A couple of times I have got quite frustrated because I feel like I haven’t been able to give it everything,” Christie says.

“That one heat. In the qualifying series, you get through that one heat and the second and that’s when you start feeling comfortable and actually expressing yourself as an artist would, and just letting go.

“I just haven’t really got that opportunity to do that, yet. In Brazil [he finished fifth at the Rio Pro in May], I started feeling it, but the waves were just so tricky. It would be good to do it on an open canvas.”

With second round exits at Trestles and France, and a third round finish at the Moche Rip Curl Pro in Portugal, Christie wouldn’t be able to paint anything near the masterpiece required, or the one he is capable of producing.

Regardless of how it comes out in the wash, it’s been a hell of a year for Christie; who grew up idolizing surfers like Slater and Fanning, and has gone on to spend 2015 competing against, and learning from, them.

“It was pretty crazy – pretty overwhelming [at first],” he says.

“I totally respect all those guys. I’m not the kind of guy that would go in there and say ‘I’m going to rip your heads off’ before I got to know them.

“But, now, I feel like I’m at a place where I’m pretty keen to do my thing, and not worry about anyone else.”

“Surfing is kind of weird in the fact that we’re surfing dangerous waves; we’re surfing waves where you need to be in the right places.

“You only learn from watching the best. I’ve been doing that a lot, and they’ve been good enough to share some of their secrets. It’s pretty cool. It’s an amazing opportunity.”

His year on the tour has been eagerly followed by NZ’s surfing community but with top tier events showing on SKY TV pop-up channels, he has been drawing in the non-surfing crowd to the sport too.

Christie, whose own WCT qualifying campaign last year was partially financed via a crowd funding website that raised $22,000, is glad his journey has brought fresh eyes to surfing – but believes New Zealand has the potential to back the sport far more effectively.

Scholarships for talented young Kiwis to top Australian surfing programmes – such as the Hurley Surfing Australia High performance Centre on the Gold Coast – would help, he says.

“We’ve always had the talent [in New Zealand],” Christie says.

“There are so many guys older than me who were – still in my eyes – better than some of the guys on tour, but it’s just so hard to do it.

“A lot of other countries, you get young kids that have had that support their whole lives. They have training facilities in their country, just like we do for rugby in New Zealand, and they have it for surfing.

“It works out a lot for them, and they see people qualifying a lot earlier and getting into it a lot earlier. It has a huge impact on the success of those sportspeople.

“I hope New Zealand can follow those countries. Australia is probably at the top of that whole elite surfing thing, and the support they give their surfers.

“It pays off – they have world champions. I feel like New Zealanders have the talent, we have the waves, we have the ocean – we just need to channel some of that energy.”

Surfing has been a 100 per cent commitment for Christie and his family this year. For each of his 19 WCT and QS events, he has arrived seven to ten days early to surf and get a feel for the wave – and look at different swells and winds. Media interviews have been rare.

Christie hasn’t been back to New Zealand since January, and won’t return until the end of this month. He, partner Sophie and their two kids, Eli and Milo, pulled sticks from New Zealand, and have spent the entire year on the road.

“We just packed up our home, and committed to AirBnB,” he says.

“This is home – the road. The sacrifices you make are you are away from your wider family, and your comfort zones that you grew up around.

“But like any professional sport that is international, you have to make yourself feel comfortable everywhere you go. Make that your home, because if you start not wanting to be here, that’s when it’s not going to work.”

Though the end result wasn’t the one he was after, Christie has made it work. Along with sponsorship, the Kiwi has earned a total of US$123,450 from competing on the WCT and QS in 2015.

However, barring something special on Hawaii’s famed North Shore next week, it will all be over soon. All the bad luck, good waves and good connections, over for now. Would he have done anything differently?

“Not at all,” Christie says. “Everything happens for a reason. No regrets, bro.”

Surfing not your thing? Watch all the stars of the PGA TOUR, LPGA, and European Tour on PGATOURLive.co.nz