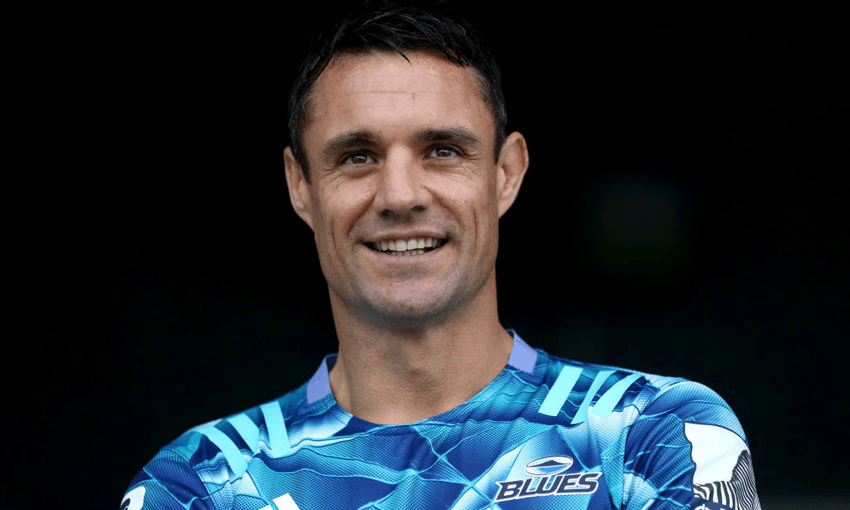 Before Dan: A brief history of all the earlier Blues ring-ins

The arrival of Dan Carter is far from the first time the ever-struggling Auckland team has hoped to turn around its fortunes with a star signing, writes Jamie Wall.

New Zealand rugby Twitter is a generally desolate place, especially lately given that there’s been nothing to talk about ever since the season was suspended back in March. It’s mostly various journalists joking with each other, middle aged men whinging about why we can’t have rucking and All Blacks playing provincial and club games anymore, and concerted efforts from main stream media to stir up shit by piping in the views of Stephen Jones (with said shit being then pumped back out as reaction articles the next day).

But, last night, something magical happened. An actual big rugby deal found its way onto Twitter – Dan Carter, the 112 test All Black and world record points scorer, was apparently going to play for the Blues.

I’ve had two Blues sources indicate this is legit.

It didn’t take long for the sleuths among us to deduce that the leaked WhatsApp screenshot from coach Leon MacDonald was indeed genuine, then by 11am yesterday the assembled media could see the evidence for ourselves. Southbridge-raised, Christchurch Boys High educated, Canterbury representative and Crusaders icon Daniel Carter in a Blues jersey. You could almost hear the gnashing of teeth from down south from right there on the Blues training field (although some of it was from Newshub’s resident Cantab Ollie Ritchie, who struggled to hold back his tears during Carter’s ensuing press conference).

But Carter is not the only playmaker that the Blues organisation has rung in, not by a long shot. The team that should be star studded from its local talent alone has often tried to ape the talent acquisition of a Manchester United or Real Madrid – albeit with a serious degree of diminishing returns. Here’s a run down of their signings and what they achieved.

Tthe man who launched the Blues run of success back in 1996 was famously plucked as a 16-year-old from Horowhenua-Kapiti by Graham Henry to move to Auckland, going on to win fame as a flashy first five and sexually charged biscuit advocate. Surely the team’s most notable recruitment success story (although yes, he was pulled north before Super 12 actually started).

Stunk up the joint for the Canes, lasted one season with the Blues. Says an awful lot about UK club rugby that 11 years later he is regarded as one of their best players.

Output: his career can be used as a trivia question at the pub.

Ironically it was Carter’s dominance in a Crusaders jersey that prompted the CHBS product to move north after three seasons in red and black. Brett’s admittedly workmanlike efforts couldn’t match his rugged good looks and he left after only a couple of seasons.

The Hurricanes’ cult hero was ousted by the villainous Mark Hammett in his first year in charge, so along with Ma’a Nonu they went to Eden Park in search of revenge. Unfortunately they ended up suffering a last second loss to their former team the following season, with both leaving shortly after to pursue their careers overseas.

Output: Nonu at least came back last year and played so well he almost made the All Blacks at age 37.

What the hell was this about? A premiership winner with the Wests Tigers and World Cup winner with the Kiwis, but no one actually checked if Benji could actually play union. Turns out he couldn’t so he went back to the NRL only halfway through the 2014 season.

Output: less than nothing, because it would’ve cost the Blues a fortune to replace the billboards with his face on them all over Auckland after he left.

This isn’t strictly a ring in, because Englishman Francis has a unique story of landing in New Zealand on his own volition in 2011 to try and crack it in New Zealand rugby. After bouncing around three provinces, new Blues coach Tana Umaga saw something he liked and gave Francis the reins in the 2017 season. While he didn’t do enough to press his case further locally, it paid off as he ended up representing his native country later that year.

Output: the Blues can at least say they had another guy who went to the World Cup last year.

The biggest signing in years, the most high profile Barrett brother simultaneously enraptured Auckland and enraged Wellington with his shock defection last year. While the reasoning behind that lies with wanting to be closer to his wife’s family (Hurricanes fans can’t really argue with that – after all, that’s how we got Jonah Lomu), Barrett’s eventual elongated rest period has been timed to perfection thanks to Covid-19 and the rejigged Super Rugby Aotearoa. Word on the street is that Dane Coles and the Hurricanes have a bounty out on their former team mate in their first game in a week and a half, so maybe DC’s use as an injury replacement might come into play a bit sooner than originally thought.