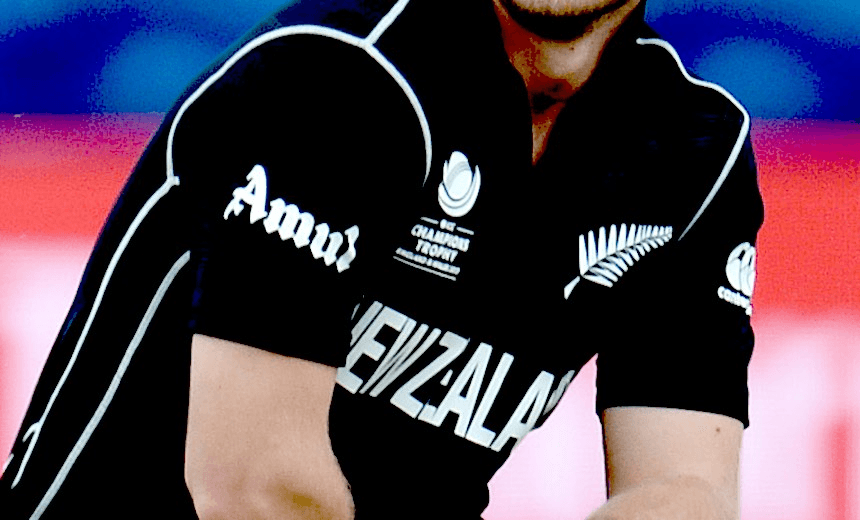 Here’s everything you need to know about Amul, the Blackcaps’ latest shirt sponsor

The new logo adorning the Blackcaps’ shirts belongs to an Indian dairy giant with a long-running advertising campaign based around spectacular puns.

It looks like it could be a secret society which dabbles in the occult, or the name of Brendon McCullum’s latest racehorse. But the word ‘Amul’, printed in a heavy medieval font on the Blackcaps’ sleeves at the current ICC Champions Trophy, is in fact the name of India’s largest food producer – a Gujarat dairy co-operative whose range of products includes a chocolate-flavoured butter and ‘Memory Milk’.

From a fan’s point of view, this could be the New Zealand men’s cricket team’s most exciting shirt sponsor since the foamy old days of DB Draught. It breaks a long run of steady partnerships with a variety of major banks (and a weird three years with Indian property developer DEC) – although whether it extends beyond the Champions Trophy remains up in the air.

The first thing you need to know about Amul is that they have one of the world’s best – and longest-running – advertising campaigns, and that these ads frequently include some of the most diabolical puns ever imagined.

Amul billboards, or ‘topicals’, have been a part of Indian life for over 50 years. “We’re pretty quick with them – we produce at least five a week,” says Rahul daCunha, the creative head daCunha Communications, the agency responsible for the ads. “So much is happening in the world – Qatar being isolated, Trump and his Twitter presence… plus the craziness in the country called India.”

A typical topical will gently lampoon one of these issues of the day – for example the time Donald Trump tweeted “covfefe”.

A lot of topicals require a knowledge of Indian politics or popular culture, but others transcend all cultural barriers. Here’s one roasting Justin Bieber for his alleged luxurious list of demands ahead of his Mumbai concert last month.

And one from when Adele won a lot of Grammys.

This one is about Usain Bolt being stripped of his Beijing Olympics gold medal after a relay teammate tested positive for drugs.

This has been happening since 1966. A history of Amul topicals, written in 1996, suggests that for most Indians the ads peaked in the 1980s, but they seem to be experiencing a kind of second wind in the social media age, where they can be liked and shared on Twitter and Facebook.

Many of the ads feature a round-headed little girl with a bob and a polka dot dress, who doesn’t appear to have a nose. That is the Amul Girl, a lovable corporate mascot who also appears on some of the Amul product packaging.

Amul produces a wide range of dairy-based products, from the standard butter, milk and ice cream to Indian staples like ghee, paneer and mithai. One of the most eye-catching products listed on the company’s website is Amul Choco Buttery Spread, a chocolate-flavoured butter currently only available in Ahmedabad. One suggested application for Choco Buttery Spread is listed, intriguingly, as “Chocolate Pizza”.

The company’s range of milk beverages includes Memory Milk, a flavoured milk enriched with ayurvedic herbs, which is claimed to have memory-enhancing qualities. There is also Amul Kool, a non-memory-enhancing flavoured milk which comes in elaichi (cardamom), kesar (saffron) and rose. A recent addition to the Amul range is Amul PRO, a malt-based milk additive which looks like it could be India’s answer to Milo.

New Zealand-based Blackcaps supporters who would like to try some of the new shirt sponsor’s product may be in luck. Amul’s official New Zealand importer is Ponsonby-based ABS Foods & Spices, who confirmed that “Amul Product is available at all major Indian spice shops.” Discount Food Bazaar in the Auckland suburb of Sandringham, for example, carries a wide range including Amul Kool and Amul Masti, a spiced buttermilk drink.

A spokesman for New Zealand Cricket confirmed many members of the Blackcaps squad have tried Amul products on tours of India or through their involvement with the IPL, and said he would seek specific recommendations from those players.

An Amul spokesman said via email that the company had received “very positive feedback” on the Blackcaps sponsorship. “The players are well known and recognized in India due to their good performance in IPL,” he wrote. “We will examine the possibility of continuing this association depending on their proposal for the future bilateral series and ICC events.”

Some Indian cricket fans have expressed mild consternation that while the New Zealand men’s cricket team is sponsored by an Indian company, the Indian team’s shirts are currently sponsored by a Chinese company – electronics manufacturer Oppo.