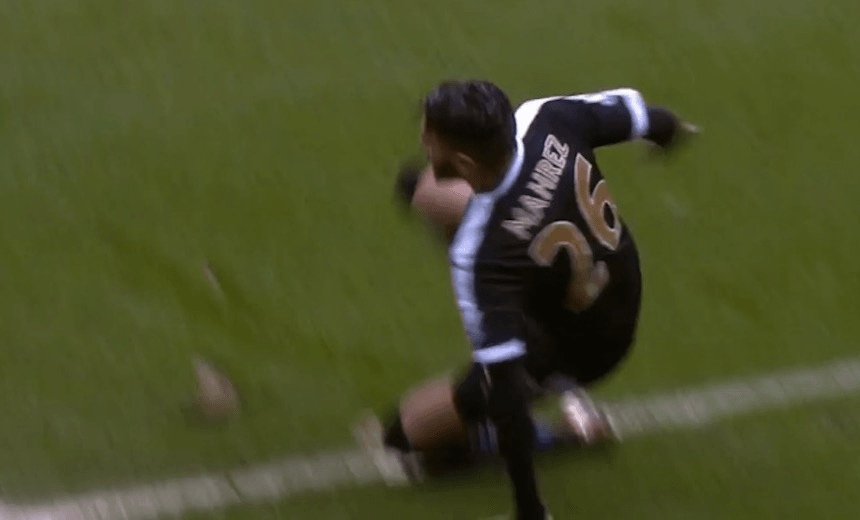 A horrible goal celebration in Manchester, a horrible knee injury in London, and horrible weather in Stoke – all-in-all another great weekend of Premier League action.

Yet another milestone in the unbelievable story of Leicester City – for the first time all season they are favourites to win the Premiership at the TAB. The Foxes are now paying $2.80 to Arsenal’s $3 and Manchester City’s $4 after making light work of the latter in a 3-1 victory at the Etihad last weekend to go five points clear at the top of the table.

The unlikely hero for Leicester was large German defender Robert Huth, whose scary presence in the box produced a brace of goals and helped his team to a 3-0 lead within 60 minutes. The other goal came through a trademark counter attack finished off by Riyad Mahrez, who celebrated with possibly the worst kneeslide in Premier League history, leaving a huge divot in the fancy Etihad turf and sending him into a full barrel roll.

What does it say about their two teams fortunes this season that Mahrez walked away from his shocking kneeslide unscathed yet Chelsea defender Kurt Zouma completely destroyed his ACL by doing something as innocuous as jumping for a header? The buckling knee slo-mo will easily win Most Sickening Injury of the Season, and will heap yet more misery on Chelsea despite salvaging a 1-1 draw with Manchester United.

Curiously, the TAB still rates Chelsea ($301) a better chance than West Ham, Liverpool or Everton (all $501) to win the league, despite languishing in 13th place, five points behind the two Merseyside teams and nine points behind West Ham.

The best money may be on Tottenham at $5.50, after they dominated Watford at White Hart Lane and slide into second on the table. A deft cross from rare genius Dele Alli found Kieran Trippier for the side’s only goal. They can solidify their title credentials this weekend when they meet Manchester City at the Etihad. Just have to steer clear of the trench dug out by Riyad Mahrez’s terrible kneeslide.

Will two huge matches in two weeks prove too much for Leicester? Arsenal won the reverse fixture 5-2 back in September, which in retrospect seems like the result of the season, a supreme feat of giant-slaying. They enjoyed a comfortable 2-0 win over Bournemouth last weekend, and just seem more comfortable in general now they’re back in their familiar 3rd-4th spot on the table. With Alexis Sanchez getting back up to speed, an Arsenal win here could flip the whole season on its head once again with Spurs and Man City meeting later on Monday morning.

Unused substitute as Stoke City were soundly beaten by Everton, who had the game sewn up with all three goals before halftime. Another of Stoke’s wilderness men, Peter Odemwingie, got a run on instead. Once-good Stoke have now lost their last three Premier League matches 3-0, and have just one win to show from their last six.

Where Are U Now: Zoltán Gera

Dividing his time between West Bromwich Albion and Fulham between 2004-2014, Hungarian midfielder Zoltán Gera seemed to deal exclusively in Wondergoals – pick that out – which he scored at a rate of approximately 3 per season. He parted ways with West Brom at the end of the 2013-14 season and returned to Hungary and Ferencváros, the Budapest-based club he played for before first joining West Brom.

Spectator of the Week

The face of football misery (Swansea City vs Crystal Palace).

Liverpool defender Dejan Lovren will miss the rest of the season after falling suddenly ill. Reports claim he ate as much as 10kg of South Korean confectionary sent to him by fans.