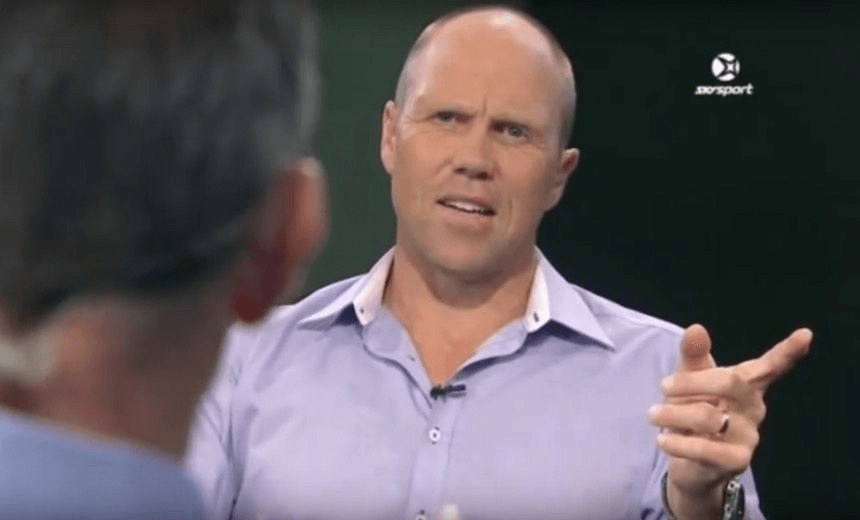 Why is New Zealand rugby television so dry and serious and not more like The Footy Show?

Tim Murphy wonders why New Zealand rugby fans can’t have a show that’s fun and and irreverent and, well, more like rugby league’s The Footy Show*.

The problem with rugby in New Zealand is that it is only a game of two halves.  Two world-class halves of on-field action. The third, critical part – the TV buildup and warm-down so brilliant in sports codes in Australia, the US and Britain – seldom rises to the occasion.

Our players have been number one in the world for so long no one seems to remember when another side held top ranking. Our coaches are succeeding internationally like never before. Our technical televising seems to be right up there, camerawork, replays, high and ground-level angles. The commentary is pretty partisan but proficient, so let’s put that aside.

It’s just in the bits when we get people on preview and review shows to talk about the game during the week and on match days that we drop the ball.  Sky TV is reducing the role of the professional broadcasters – the fine Tony (TJ) Johnson and thinking man’s fan Scotty (Sumo) Stevenson – and thrusting forward former players. Most of them really former, like 20 years ago.

Despite the two decade search, they seem to have never really found the star players to make the transition to TV stars. On the chat show format, Marc Ellis was (and in comments Justin Marshall and on panels John Kirwan might now be) the exception. But the list of those who try their best without obvious training and development is long.

Short of identifying players who have played, retired and can fit into a Working Style suit, there doesn’t seem to be much going on out at Sky’s Mount Wellington headquarters to do the nation’s big game justice.

How can it be that Jeff Wilson is the face of rugby on New Zealand TV? Great rugby and cricket player – just not in possession of a TV face, voice or personality. His natural state is one of a frowning earnestness, tired eyelid droop and long, long monologues dressed up with a question mark.

At last year’s Rugby World Cup his nightly stints on a professionally chaired panel alongside former Springbok Joel Stransky and ex-Wallaby George Gregan were exercises in lots of Jeff finger points and told-you-sos, while the others brought humour, banter and self-deprecation.

During the aftermatch of the Super Rugby final on Saturday, almost every question Jeff directed to his panelists was a speech. The panelists themselves were mixed. Christian Cullen is authentic and has something to say, Kirwan is all Latin arm gestures, spiky hair and designer glasses but he is real, raw, funny and very recently from the cauldron.

The surprise is Andrew Mehrtens – a flamboyant, funny personality Sky has somehow locked away in a stiff, awkward TV set performer. Saturday’s wilful drenching of his smart suit on the sideline before kick-off was distracting more than illuminating.

The big question is how come a whole generation of All Blacks can’t produce a Matty Johns, Ben Ikin, Mark Gasnier, Nathan Hindmarsh or Beau Ryan – just to name some of the current talent gracing the Aussie league shows.

It isn’t just in presenting in front of the camera that we fall behind. The ideas the Australian Footy Show, Fox Sports’ NRL 360  and Monday Night with Matty Johns come up with for these characters to show their cheek and talent are light years from the New Zealand offerings on Sky.

Are we too small a market? Too limited a talent pool? Too shy? Too gentlemanly? Too humble and mumbling to pull off such a show?

Surely not. The legendary Ric Salizzo did it on Sports Cafe with Marc Ellis, Eric Rush and others. The Crowd Goes Wild often gets there with the peerless James McOnie, if you can look past Mark Richardson’s self-satisfaction.

Rugby has a lock on the sports market in New Zealand and deserves a regular high-level showcase on the channels of its rights broadcaster. A few groups of talking heads, led by Jeff, and maybe Ian Jones standing up showing tactics or drawing a move here and there on a screen, are just too darned average.

Karl Te Nana was good on-field during the final, and Steve Devine used to be terrific with him on their provincial rugby show. Cory Jane would be daring, risky and funny when he stops playing and Israel Dagg has that glint in his eye and a smile – that’s it, a smile! – that lights up a 50 inch Panasonic screen. Jeff Toomaga Allen showed class and promise during a quick interview the other night.

Then the talent needs ideas – some devices, gags, regular gigs – that help today’s players show their humanity and lives away from rugby. Behind the scenes interviews and chats. Fun, insight, smiles.

What we need is someone to Make Rugby on TV Great Again.

* Editor’s note: the Footy Show is Australian, therefore contains all of what makes Australia problematic as a country. We’re not advocating for importing that – just the sense of humour and of sport as being part of society.