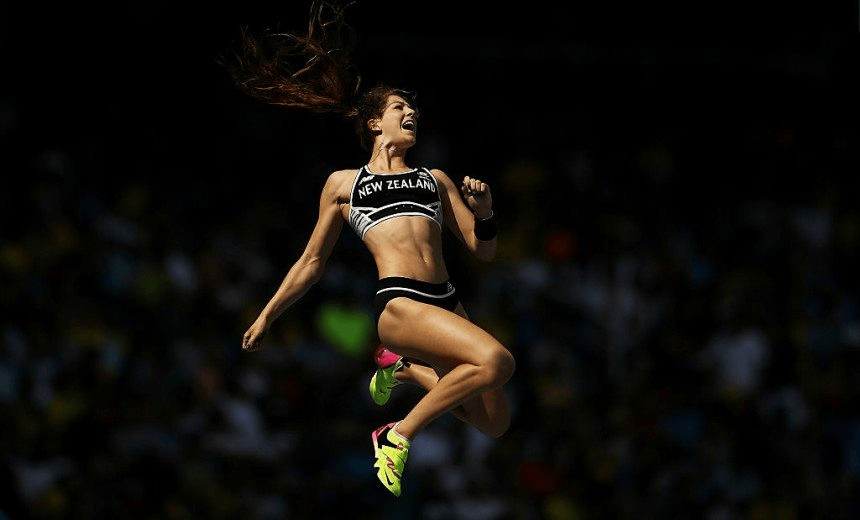 In 2013, while I was training in the javelin at the Millennium Institute in Albany, there was always a small group of athletes training in pole vault across the track. That looks hard, I thought, and went back to my throwing. The problem with competing in a somewhat niche track and field event in New Zealand is that it’s hard to tell who is good and who is just better than everyone else. Eliza McCartney was in that training group every day and was easily better than everyone else. But was she good? She had a season’s best in 2013 of 4.11m. A New Zealand record, very impressive, but barely a shadow of what she’d go on to achieve in the next three years.

There’s something horrifying about watching pole vault close up. Everything is done so slowly. There’s a moment in every vault when the vaulter is completely upside down and they look as if they aren’t moving. It’s like their momentum has run out and they’ve forgotten to right themselves. In that second, I’m just waiting for them to fall straight back down in a tragic turn of events.

Back in March at Waitakere Trusts stadium, I watched Eliza McCartney sail over the bar again and again and wondered not only how she was physically doing it, but whether I was seeing an athlete rising, just before the ever-crucial turning point.

By the end of March, McCartney had cleared 4.80m and secured herself a spot in the Olympic team. After this meet, I spoke to her coach, Jeremy McColl, about her chances in Rio. Being a recent fan of the event and completely naive, I suggested that perhaps she could even get a medal. McColl was quick to harness my expectations. “We’re not really looking at the medals to be honest,” he said, perhaps aware of the pressure that New Zealand loves to heap on its favourite Olympians. “It’s her first Olympics. If she can make the final, wow, that’s a huge achievement.”

At that point, McCartney was training once a day and attending university part-time. She was very much a successful amateur athlete. Laughing and giggling throughout her post-event interviews showed the enthusiasm and joy of an athlete who couldn’t quite believe her own accomplishments.

In the build up to Rio, qualifying for the final was still the goal for team McCartney. She wasn’t expected to win a medal. There was no sign of her in ‘New Zealand’s top medal hopes’. And for a few moments in the qualifying round, it seemed that she might go home without clearing a single height. Missing her first two attempts at 4.45m, McCartney needed to clear her final vault just to stay in the running. She did, and then went on to comfortably clear the automatic qualifying height of 4.60m.

Throughout the final, McCartney presented as the veteran of the lot, clearing her first four heights on her first attempts and taking the lead. The real veterans stumbled, with some bowing out well before expected, and suddenly a medal seemed like a very realistic possibility. In fourth place after bowing out at 4.85m, McCartney needed Australian Alana Boyd to miss her last attempt for her to be promoted to the bronze medal position. Boyd missed and suddenly McCartney, at 19, is an Olympic bronze medalist.

McCartney has had a meteoric rise in the past 12 months. She was overwhelmed to qualify for the Olympic Games. Then she was overwhelmed to qualify for the final. And now she has a bronze medal and who knows what’s to come. Eliza McCartney has gone up, up, up. And when it seemed as if she had stopped moving, and might fall back, she pulled herself over and proved herself as a world class athlete and favourite of the Rio Olympics.