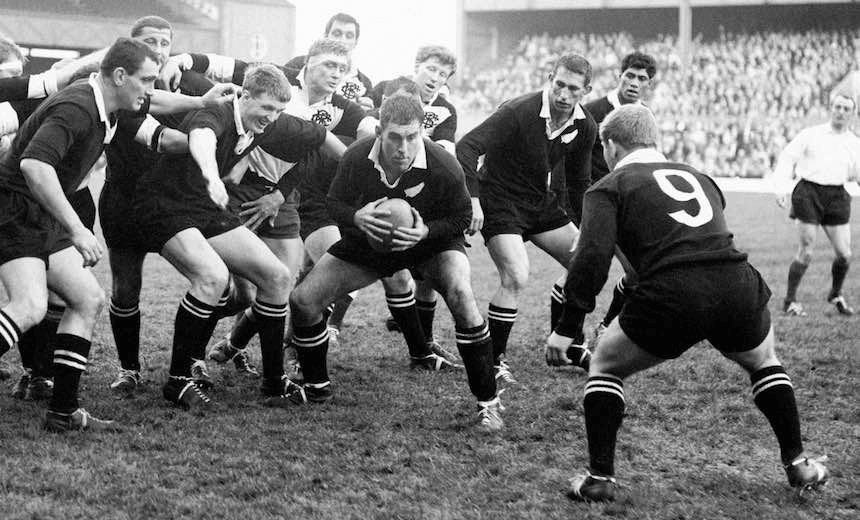 Three All Blacks who were there the day Sir Colin Meads famously played on with a broken arm recall the game for RNZ Eyewitness producer Justin Gregory. This story was first published in 2016.

All Blacks first five-eighth Earle Kirton has always blamed himself for the broken arm that Sir Colin ‘Pinetree’ Meads suffered on the 1970 All Blacks tour of South Africa. Just a little bit, anyway.

The injury happened during a tour match against provincial team East Transvaal. The All Blacks had been in South Africa for a few short weeks and had their eyes on the looming first test against the Springboks, South Africa’s fearsome national team.

South African rugby boss Dr Danie Craven had expressed the hope that the provincial teams would “soften up” the New Zealanders. The East Transvaal team were up for it.

“We were getting hell knocked out of us.”

Kirton, now a dentist in Wellington, recalls the game vividly. “There were boots flying everywhere at the bottom of the rucks. I can remember him [Meads] saying to me, ‘Shit, it’s like duck shooting season down here. They’re all over the bloody place.’”

Kirton remembers that All Blacks team as a very close one, with a strong sense of ‘one in, all in’. A key ethos was that if the little guys got into trouble doing their job, the big men would be there to help them out.

“There was a pact between the forwards and the backs,” says Kirton. “The idea was ‘you backs hold onto the ball and we’ll get there’.”

It was keeping true to this code that would see Meads get injured. An early converted try by All Blacks winger Bryan Williams enraged the East Transvaal team. At just six minutes into the game, Kirton got his hands on a loose ball.

“So I went down on the ball and he [Meads] said ‘I’m coming up’. Then I heard a whack. Someone had booted his arm where he had his arms around me on the ground, covering me up.”

While no one is exactly sure which of the opposition players kicked Meads’ arm, most All Blacks supporters are in no doubt that it was intentional. Sir Brian Lochore was captaining the team that day. Diplomatically, he won’t commit to saying the East Transvaal team targeted Meads, but he “assumes they knew whose arm it was”. Either way, says Sir Brian, “it didn’t do a lot for Colin’s next week or two”.

“I think they were sent out to knock a few guys around,” says Kirton. “Pinetree copped a boot that might have got me. They were going to make sure that the test players got roughed up a bit.”

Meads got up from the ground after the kick and complained to Kirton that he couldn’t feel the fingers on his left arm. The first five looked up at Meads in shock.

“I said ‘Oh sugar. I mean heavens. Aw shit, Pinetree, you haven’t broken it have ya?'”

“Maybe you’ve hit the funny bone. I wouldn’t worry about it just yet. See if it starts to come right and if it doesn’t, we’re in trouble.”

“And with that the Great Man played on.”

Twenty minutes later, Meads went to the sidelines for medical attention. A local doctor told him that the injury was probably just a pinched nerve. Meads went back on and, in all, played 76 minutes of hard game with a clean break in his lower left arm.

When an X-ray later confirmed the break in his arm, Meads muttered: “At least we won the bloody game.”

Twelve All Blacks were injured during the East Transvaal bloodbath. Brian Lochore started the game with a broken hand and ended it with a broken nose. Some of the players were hurt so badly that they missed the first test; Colin Meads was one of them.

He would return to play the later test matches wearing a protective shield on his forearm, but the All Blacks lost the series 3-1.

While Meads’ courage in playing on with a broken arm has become an All Blacks legend, the rights and wrongs of the incident continue to be debated. But, as Pinetree himself made clear, what isn’t up for debate is the result; they “won the bloody game”.

Republished with permission from RNZ.