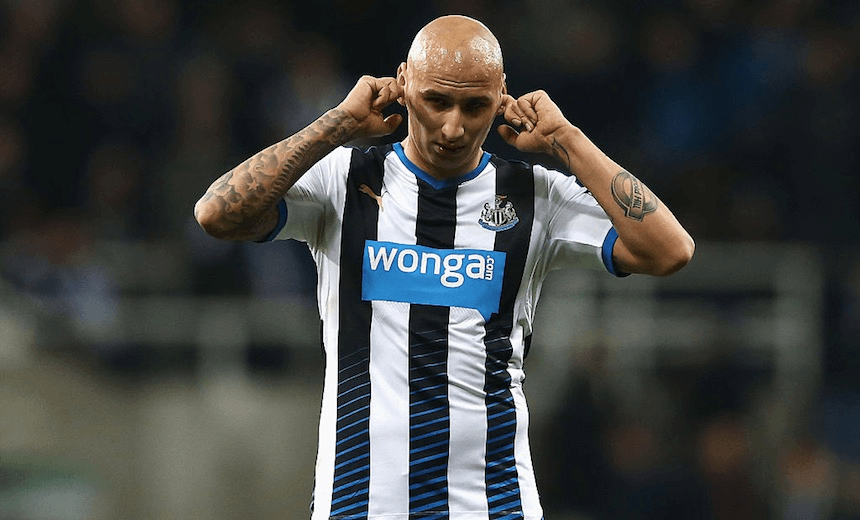 Is Jonjo Shelvey the most important signing of the January transfer window? Has anybody seen Peter Crouch this week? And what happened to muscular rapping Dutchman Royston Drenthe?

The January transfer window is wide open, and Premier League clubs are rushing in from every corner of England (and Wales) to partake in a bit of wheeling and dealing. While there have been no blockbuster signings so far, a scattering of intriguing and potentially excellent value additions have been made across the league.

Will offshore signings like Jan Kirchhoff (Bayern Munich to Sunderland), Marko Grujic (Red Star Belgrade to Liverpool), or Mohamed Elneny (Basel to Arsenal) carry their new clubs to success or ? Only time will tell. Kirchhoff had a shocker in his first game for Sunderland as they were thumped 4-1 by Spurs, but remember how bad Per Mertesacker looked when he first joined Arsenal?

One signing from whom we know exactly what to expect is Jonjo Shelvey (Swansea to Newcastle), who immediately made a difference at St James’ Park last weekend. Shelvey was instrumental in both his team’s goals as they beat a strong West Ham side 2-1 – his raking pass for their second reminiscent of Frank de Boer’s pass to Dennis Bergkamp in the 1998 World Cup which inspired the greatest moment in the history of football commentary. Three vital points for Newcastle, who now sit within a point of escaping the relegation zone. If they can stay up then Jonjo Shelvey will have paid for himself by the end of the season.

The match of the week ended up coming from Stamford Bridge, where a resurgent Chelsea – now unbeaten in their last 6 Premier League matches – traded goals with Everton in a dramatic 3-3 stalemate. The scoring was bookended by two classic John Terry moments – a bumbling own goal to hand Everton the lead just after half time, which he ultimately compensated for with a heroic 98th minute goalmouth scramble equaliser, scored from an offside position.

Elsewhere in the league the unidentified reader of Stoke City fanzine(!) The Oatcake issue 588 was treated to a 0-0 draw off the back of two very strong goalkeeping displays from Petr Cech and future England number one Jack Butland, while an equally impressive David De Gea was man of the match in Manchester United’s 1-0 win over Liverpool.

One man who won’t be getting anywhere near Goalkeeper of the Month is unlucky Crystal Palace keeper Wayne Hennessey, who followed up his agonising fumble against Aston Villa by letting in four goals as Sergio Aguero ran rampant for Manchester City. The win brings City to within a point of Arsenal and Leicester City at the top of the table.

Match of the Week: Arsenal vs Chelsea (5am Monday NZT LIVE on Premier League Pass) (Schedule)

This is shaping as both a hugely important and hugely entertaining grudge match after Arsenal’s Diego Costa-manipulated meltdown at Stamford Bridge earlier in the season. Costa is back in form since the deaprture of Jose Mourinho, and Chelsea haven’t lost in six games under new coach Guus Hiddink. Arsenal on the other hand are looking increasingly at risk of ‘doing an Arsenal’, and anything less than a win here would probably see them surrender top spot on the table.

Unused substitute in Stoke’s 0-0 stalemate with Arsenal. Retweeted a funny pic of himself standing next to a jockey during the week.

Where Are Ü Now: Royston Drenthe

Royston Ricky Drenthe, a short and exceptionally muscular left-sided winger, spent the 2011-12 season at Everton, where the back of his shirt read “R. R. DRENTHE”, probably the scariest sounding name in Premier League history. The Dutchman was on season-long loan from Real Madrid, but only made it to March before falling out with David Moyes and being banished from the club. After a spell in Russia, he moved to Reading, where history repeated. They couldn’t wait to see the back of him: “Reading FC have already brought in two players, which is great, but what will have really pleased the fans is the departure of one Royston Drenthe,” read one local report on the topic of his departure. A talented footballer who has a sideline performing guttural Dutch rap, 28-year-old Drenthe now plays in the UAE Pro League for Abu Dhabi-based Baniyas Sports Club.

Twinkle-toed Bojan has always appeared kind of lonely and out of place in the photos he posts from tough old Stoke, but now he’s reinvented himself with a classic hard man haircut. Looks like he’s finally starting to assimilate.

Is playing as the Warriors in NBA Live: worse than playing as Real Madrid in FIFA? Who are the Everton of the NBA?

Another entry into the growing Footballer’s Meals file, this one from Watford’s Ikechi Anya actually looks quite good.