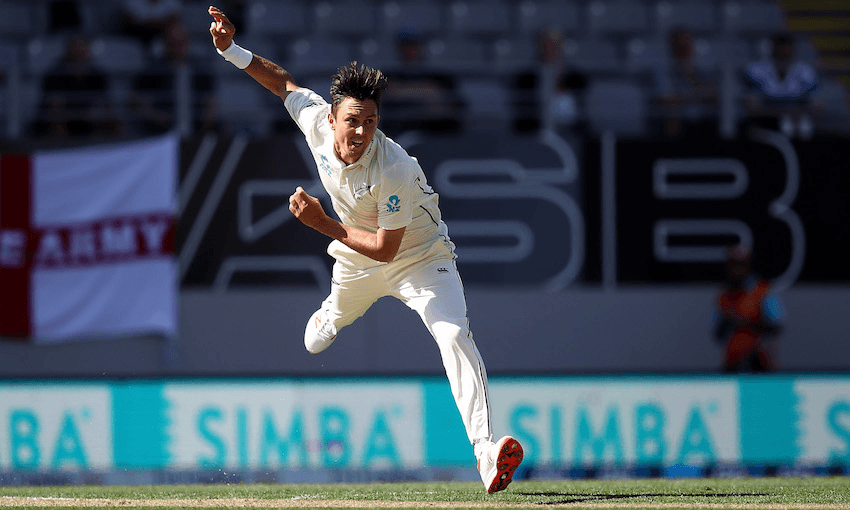 In 2015 Simon Day travelled to Adelaide to observe the inaugural day/night test. Yesterday, he caught the train to Eden Park to see the first pink ball test match played in New Zealand.

I feel sorry for Neil Wagner. This summer the test specialist only gets to play four games for his country. That’s eight innings at most to do his work. And as Trent Boult and Tim Southee not only took all ten wickets, but bowled all 20.4 of the overs it took to dismiss England, Wagner missed 12.5% of his entire international season. He’s a team man, but when you took seven wickets in your last innings, the fourth best figures by a New Zealander ever, and then wait nearly four months to have another bowl, you’d be a bit frustrated to not even send down a few short balls at the tail. But to witness that bowling performance from up close would have been special (although he still had to field at fine leg because Tim Southee’s big hands are so good at third slip).

Trent Boult and Tim Southee, the beautiful faces of New Zealand’s bowling attack (Neil Wagner is its heart and soul). Yesterday they were practically perfect, bowling back to back unchanged for an entire innings. I’ve never seen a bowling performance like it.

For the last two summers, with New Zealand on the verge of elite status as a test nation, the difference between the Black Caps and Australia, and then South Africa, was our bowlers’ discipline. That ability to consistently hit good areas outside off stump, to live in the corridor of uncertainty. They’d bowl glorious wicket taking deliveries, then fail to sustain any pressure through that relentless accuracy. And then injury denied the duo any chance of building a consistent partnership when it was needed the most.

Today, they peaked as a bowling combination against a top cricketing side. Before the national anthem, slightly separated from the rest of the team, Southee embraced Boult and Williamson, the three senior players, laughing, excited to be playing test cricket again. And from the first delivery they swung the ball and were accurate, beating the outside edge, not giving away runs, not wasting deliveries. First slowly suffocating England, then quickly slaughtering them. Each wicket is worth recounting.

With pressure building in the fifth over Boult delivered the perfect outswinger to Alastair Cook. Angled in, moving away, impossible not to play, and it was edged to second slip. After a Southee maiden, Boult slammed one between Joe Root’s bat and pad. Full again, this time swinging into the right hander and lighting up his off stump. Perhaps England’s two greatest modern batsman completely undone by Boult’s swing.

Ten balls later Boult drew Dawid Malan into the same shot as Cook from another gorgeous outswinger, wicketkeeper Watling took the catch. England were 16/3. A delivery from Southee held it’s line and Stoneman was caught behind. In the next over Boult, who had been taking it away from left handers all afternoon jagged one back into Stoke’s off stump and his return to test cricket ended quickly.  Southee got Bairstow caught and bowled, a good catch that came off the middle of the bat. Now looking at the bowlers, Boult curled one into Woakes’ off stump. And Southee embarrassed Moeen Ali with an inswinging slower ball yorker that he didn’t get close to.

England were 23/8, three runs short of the lowest score in test history – the inglorious 26 made by New Zealand, ironically against England, in Auckland 63 years ago almost to the day. Unfortunately, four runs were added and New Zealand’s place in the record books was retained for another day before Stuart Broad slashed at a Southee delivery and Kane Williamson took a one handed-horizontal-airborne, screamer in the gully; one of the best catches you’ll ever see. Craig Overton smashed a few runs to take England past their lowest ever score, before Boult took his sixth wicket, a relatively boring exposure of the number 11 James Anderson, forcing him to lob a catch to point. All out for 58 in just an hour and a half. Who needs twilight.

I received a text from my father-in-law: “So the first 1st innings – was it the bowling, the batting, or the ball?” While the pink ball did a bit, and the crease-bound English batsmen needed to move their feet more, “Bowling. Absolutely incredible bowling,” was my reply. Brendon McCullum often said he’d pick Boult and Southee over any other bowlers in the world. Today was the best they’d ever bowled in tandem. Their right arm left arm combination means the ball was moving both ways, they bowled full and demanded the batsmen to play, and they rarely strayed from a very difficult line and length. They each bowled ten nearly perfect overs. Boult finished with 6/32, career best figures, and Southee 4/25.

After that everything else was basically irrelevant. Tom Latham did his job. Kane Williamson looked gorgeous and he bullied Moeen Ali. Ross Taylor couldn’t get a pull away. Two guys in the crowd asked each other where they went to school. The ground announcer mocked Stuart Broad. Henry Nicholls was patient. Williamson finished not out, nine runs short of becoming the first New Zealander to score 18 test centuries.

It was an enormously fun day at the cricket. Days like that don’t come along often. And Eden Park did a great job in celebrating the cricket. But it also made me wonder why they can’t do a good job all the time. Some of the gimmicks just weren’t cricket. But heaps of the ideas were great. There was good beer and good food to accompany the familiar bad food and bad beer. With three barbers chairs over looking the ground, The Barkers Groom Room was fully booked to cut hair and trim beards. The outer oval was full of food trucks and bean bags and people. The glowing test whites looked beautiful under lights. And although there were still vast sections of empty grey seats, Eden Park did a lot right. It was a great day and night. The Black Caps are winning and so is cricket.