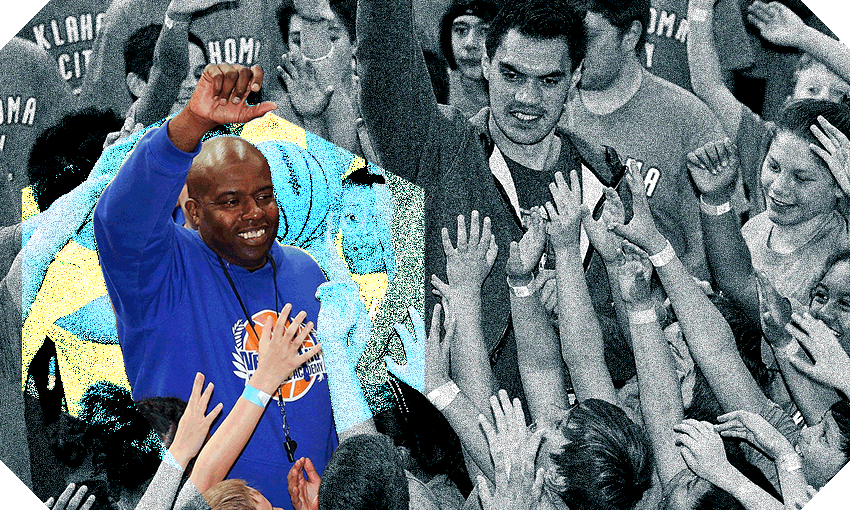 Kenny McFadden, who has passed away aged 61 after a battle with kidney disease, was the face of Wellington basketball for four decades. Madeleine Chapman remembers everyone’s coach.

For a lot of Wellington teenagers, one of the first voices they heard every morning belonged to Kenny McFadden. Thousands of basketballers, young and old, who Kenny McFadden coached, grew up hearing the same things. Stay low, hands up, eyes up, keep talking, defence wins ball games, do your homework, eat your veges.

Arriving in 1982 from Michigan, Kenny joined the Wellington Saints as a star import and never left. After six consecutive NBL grand final appearances (with four championships), Kenny returned as an assistant coach in 2010 and again in 2019. Despite having the experience and expertise to coach at a national level, Kenny always wound up back with his home team. Wellington was his city, and Newtown show buildings was his place.

Few people manage to become synonymous with a place, but Kenny and show buildings (the old winter showgrounds) were one and the same. He gave out his phone number freely but it was more a courtesy than a practicality, because until 2011, if you wanted to speak to Kenny you went to show buildings. He lived at that stadium, with its inconsistent rims and uneven flooring. It was always cold in there, and at 6am in the middle of winter, it was freezing. Kenny would sit on one of the benches at the far end, full tracksuit with hood up, and watch. He’d watch as kids shuffled in, put their shoes on and started shooting. For years it was the same routine. Shooting, dribbling, shooting, post moves, shooting. Pick a hoop and partner and shoot. If you were new, there were few instructions, you just copied what everyone else was doing. Kenny may have had some teams or players he spent more time with, but he was everyone’s coach.

Kenny never discriminated on the court. If you were willing to wake up and get yourself to the stadium at that time, he would coach you. Most of the time it was teenagers putting in extra training for nationals. Sometimes it was me, 12 years old and tagging along with my cousins. Kenny coached everyone the same. And at the end of training we scrimmaged. Us young, tiny girls alongside the 17-year-old guys working towards a college scholarship. Kenny would sub us in like it was the most natural thing in the world, and after 20 minutes of getting blocked and outrun by the guys, we all got the same high five and the same parting words: go to school, eat your veges.

Kenny was Wellington basketball. It was quite literally impossible to be invested in the sport in any way without knowing who he was. Small kids began at Kenny’s own Hoop Club – large training sessions run at night by the man himself, with a few helpers. They were for everyone at any skill level and the sole purpose was to teach kids the fundamentals of the game and encourage them to play. Kids got competitive but Kenny never encouraged it. This was in the 90s and early 2000s. Later, in 2012, Wellington basketball would shift to the ASB Sports Centre in Kilbirnie and Kenny became a figure there too.

He didn’t do a whole lot of team coaching, choosing instead to oversee virtually every player in the city instead. When Steven Adams moved to Wellington, a few things changed. Training every day under his tutelage, Kenny started coaching Adams’ age group rep teams. They won a national championship, then another, then another.

Adams was Kenny’s greatest success on the world stage, but dozens of young basketballers from Wellington have travelled to America and Europe on scholarships and contracts, able to continue playing while getting an education thanks to Kenny’s guidance, connections and emphasis on a full life outside of basketball. When Adams was drafted into the NBA, people who didn’t know Kenny that well wondered if he’d take a break since he’d “done it” as a coach. But the next week he was back on the court in his tracksuit, yelling out spots for shooting, looking out for the next kid who just needed someone to invest in them. Over three decades, Kenny was the man willing to invest in young basketball players in Wellington. His consistency both in how he approached the game and in his care for the many players he coached is arguably more impressive than his 1985 overtime buzzer beater in the NBL grand final. Hoop Club sessions continue to this day, and were coached by Kenny until recently.

Today, Kenny’s Facebook page (it’s no surprise he has more than 3,000 friends on there) is full of tributes from players young and old. Thousands are remembering his legacy and impact, with every post detailing a unique but relatable experience of Kenny on the court. He never strayed from the fundamentals, and popping in for a scrimmage years after attending a morning training, one would still hear Kenny telling kids to eat their veges.

Beneath the many tributes on his Facebook page are the last posts he made from a few weeks ago. They’re all about basketball, some about the NCAA tournament happening now, and others about kids he’s coached doing well at college. Then there’s a short clip from a women’s amateur basketball game in America, showing a player hustling hard to make a steal and score a lay-up. Kenny’s caption: “Defence wins ball games.”