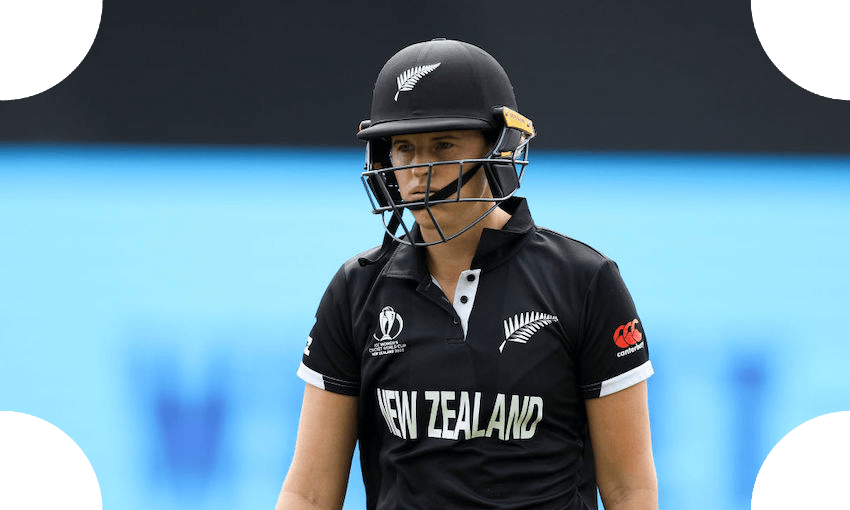 Amy Satterthwaite leaves the field after being dismissed during the 2022 ICC Women’s Cricket World Cup match between New Zealand and England at Eden Park on March 20, 2022. (Photo: Fiona Goodall-ICC/ICC via Getty Images)

Amy Satterthwaite leaves the field after being dismissed during the 2022 ICC Women’s Cricket World Cup match between New Zealand and England at Eden Park on March 20, 2022. (Photo: Fiona Goodall-ICC/ICC via Getty Images)
Opinion

Being one of New Zealand cricket’s one-day greats couldn’t save Amy Satterthwaite’s White Ferns career once the decision was made to focus on the T20 format. But was letting such a talented player go the right move?

Bold or crazy? Most pundits have fallen on the latter adjective when assessing the decision to omit Amy Satterthwaite from New Zealand Cricket’s central contracts list.

I’m not usually short of an opinion when it comes to cricket but there’s a big fence running through the middle of this issue and that’s where I’m taking a seat.

NZC’s general manager of high performance Bryan Stronach was candid in his assessment of the White Ferns when he said “they’re not where we need them to be”.

That is not just a statement of the obvious, but an explicit NZC board directive. When viewed through that prism, those words carry more freight.

It’s true, too. Despite having the generational talents of Sophie Devine, Suzie Bates and Amelia Kerr (and you can put Satterthwaite on the edge of that discussion too), the White Ferns were desperately disappointing as hosts of the recent World Cup, failing to rise not only to the big occasion, but also the mid-sized ones.

They looked to be playing one-day cricket from a different, more passive era, especially when compared to the brilliant Australians.

Nor can you argue with the logic behind focusing on T20 cricket, which is already the primary women’s format and will only become more dominant.

Whether Satterthwaite deserves to be a victim of the performance “reset” is another matter.

Her comments, delivered with class, spoke of a player blindsided by the move.

“It has been a tough few days after learning of NZC’s decision to head in a new direction and contract some younger cricketers. I am disappointed not to be receiving a contract and believe I still had more to offer.

“It came out of the blue and was a bit of a shock. I haven’t been given any insight that this was the direction they wanted to go. It was pretty devastating to hear.”

Satterthwaite is one of New Zealand’s bona fide one-day greats but if the push for a more dynamic, short-form focus is required then to be brutally honest she’s not a great fit. Her WT20I numbers are poor, with just a single half century from 111 matches and a strike rate of under one-a-ball.

If the intention was not to select her over the next 12 months – and this is difficult to ascertain unless they know who the next coach is going to be and that person has made their thoughts clear on it – then it doesn’t make sense to give a contract to Satterthwaite.

In that respect, there is again a logic to her axing.

Where it gets murky is the nailed-on fact that she’s a better cricketer and would certainly offer more in terms of raw production than the newcomers on the list. The talent pool in our women’s cricket is shallow so there’s huge risk in jettisoning tried-and-true players in an attempt to create artificial depth with inferior players.

There are no guarantees any young batters in the country will reach, let alone surpass, Satterthwaite’s abilities.

Stuff’s Brendon Egan has taken issue with her dumping. It’s strong and passionate advocacy, though not flawless.

Citing Satterthwaite’s century against Northern Districts as proof of T20 credentials is like referencing Amelia Kerr and Leigh Kasperek’s 295-run ODI partnership against Ireland in 2018 as proof they should be batting at numbers 2 and 3 for the White Ferns: both are great achievements on the day but strength-of-opposition render them meaningless when trying to project a wider picture.

It’s a tough call, as was the dropping of Satterthwaite’s wife Lea Tahuhu from the list. While Tahuhu, 31, will fight to come back, at 35 Satterthwaite has chosen to retire.

I’m of the mind that omitting Satterthwaite probably wasn’t the right call, but not because she didn’t get to go out on her own terms: that’s not really how professional sport works.

There is one more layer of sadness to this particular story. In keeping with the board’s stated commitment, the biggest winners of the new Collective Agreement that will be officially signed off between NZC and the New Zealand Cricket Players’ Association is set to be the women’s game.

It is finally being recognised for its high-performance, growth and marketing potential rather than as a cost centre.

This is great. Overdue, yes, but great nonetheless.

It was players like Amy Ella Satterthwaite, with her 6423 international runs, her seven ODI centuries, her 76 international wickets and, most of all, her enduring class that got them to this point.

High-performance sport is hard; sometimes it’s even a bit cruel.