Good morning and welcome to The Bulletin. In today’s edition: Assessing the latest trans-Tasman bubble incidents, NZ High Commission in India caught up in domestic politics, and Judith Collins continues to bang the drum on race.

There was a brief pause over the weekend to flights between Western Australia and New Zealand, after the discovery of Covid cases in Perth. Stuff reports flights are now able to resume, though two were cancelled on Sunday. Perth itself never went into lockdown this time around, though some restrictions on gatherings were put in place.

The incident highlights a truth about the first two weeks of the bubble – things can and will go wrong. And in the short timeframe so far, there have been some potentially dangerous incidents. Perhaps the most worrying happened on Friday, when a person who had breached the red zone/green zone barrier at Brisbane airport for two hours tested positive for Covid-19. They had arrived from Papua New Guinea, one of the countries the NZ government currently considers high risk. Another breach (which probably carried an exceedingly low risk) involved a traveller to New Zealand from the Cook Islands going straight on to Australia, rather than spending 14 days here first. And some nerves might have been put on edge after Melbourne ordered hundreds of people to get re-tested, following the discovery of virus fragments in wastewater.

And yet, to date none of these incidents have really been more than minor, in the grand scheme of the project. None appear to have caused chains of transmission to cross borders, nor has it ever looked like the bubble as a whole is in any real danger of collapse. It’s highly likely we’ll continue to see them in the coming weeks, but many probably won’t be worth panicking about. Even so, each incident will also be a reminder to health authorities that a tricky virus like Covid can take advantage of minor mistakes.

In fact, one of the most interesting stories around the bubble right now is that it isn’t being particularly widely used, at least in one direction. Radio NZ reported at the end of last week that far more people were coming into New Zealand, rather than Australia. Stuff reports that some flights that ended up being surplus to requirements have been cut as a result. Businesses are reporting some improvement in booking numbers, but aren’t yet at “wall to wall” levels. However, finance minister Grant Robertson said that overall the bubble was generating a “wave of positivity” for the economy, which if true means we should start seeing it show up in confidence and sentiment surveys soon.

The NZ High Commission in India has apologised after seeking and accepting oxygen supplies from the youth wing of an opposition political party. As this report from local media outlet NDTV shows, the incident has become a point of debate within the country, which is always something diplomatic outposts try to avoid. The NZ Herald asked MFAT for comment, and got the same short statement that everyone else has got, which dodged the crucial question over whether someone within the commission is currently battling severe Covid symptoms.

National leader Judith Collins has used her northern regional conference speech to continue banging the drum against supposed Māori segregation. Radio NZ reports she warned that not only would there soon be a Māori Health Authority, but there would in fact be similar organisations in fields like education or justice. Who knows, maybe there should be. The point is, it extends Collins’ streak of attacking the idea of Māori focused and directed institutions. Politik (paywalled) interpreted it as a swing to the right from the party’s leadership, and suggested it may have been a dog-whistle to more reactionary elements in the party. Writing on The Spinoff, political scientists Lara Greaves and Ella Morgan have pointed out how it may not even help Collins much within the National Party, let alone with the wider electorate.

Speaking of such institutions, the Waitangi Tribunal has recommended a new Maori-led authority to oversee tamariki in state care. Newsroom reports the recommendation follows an inquiry into Oranga Tamariki, sparked by their documentary about a case in Hastings. The argument made by the tribunal is that there’s no way signatories to the treaty would have envisioned the Crown acting as a parent for tamariki Māori, and that to date the Crown has done a poor job of it. If you need a refresher on the issue, Charlotte Muru-Lanning has put together a useful cheat sheet for The Spinoff.

Many New Zealanders are still struggling with both the mental and economic toll of Covid, according to new research. The NZ Herald’s Jamie Morton reports a high proportion of people say they lost income as a result of the pandemic, and there have been elevated levels of mental health issues and depression. These aren’t necessarily two distinct stories, and those hit disproportionately by economic issues are also more likely to have worse mental health impacts. The research underlines the dangerous effects of the K-shaped recovery we’re currently seeing, which as a recent edition of The Side Eye outlined is the state of people with plenty getting further ahead, and those with less falling behind.

The CEO of a major software company has accused the government of a significant overspend and procurement process faults in their system for managing the vaccine rollout. The NZ Herald’s (paywalled) Chris Keall reports Orion Health chief executive Ian McCrae told him his company could have done it for much cheaper and quicker, and that there was no tender process to bid for the job. A ministry spokesperson responded by saying the process was “in accordance with government rules of sourcing.”

Australia could be pulling ahead of New Zealand in their efforts to secure a trade deal with Britain, reports Nigel Stirling for Farmers Weekly. And the speculation in the story is that such a deal would involve lower quality access to UK markets for Australian agricultural products, which could set something of a precedent for how the Brits then deal with New Zealand. It wouldn’t be the first time such a move has been made, with Australia pulling something similar with Japan ahead of the signing of the TPPA.

A significant change is being made to one of the most enduring media traditions in the country – the NBR Rich List. As Michael Andrew reports for The Spinoff, it will now simply be ‘the List’, and measure more than just the net wealth of individuals and families on it – also bringing in more tricky and amorphous concepts around what people do with their money. As the NBR’s Maria Slade put it, there are various wealthy people who have simply inherited a lot of money and sit on it, and it’s more useful to discuss people who are actually building something. 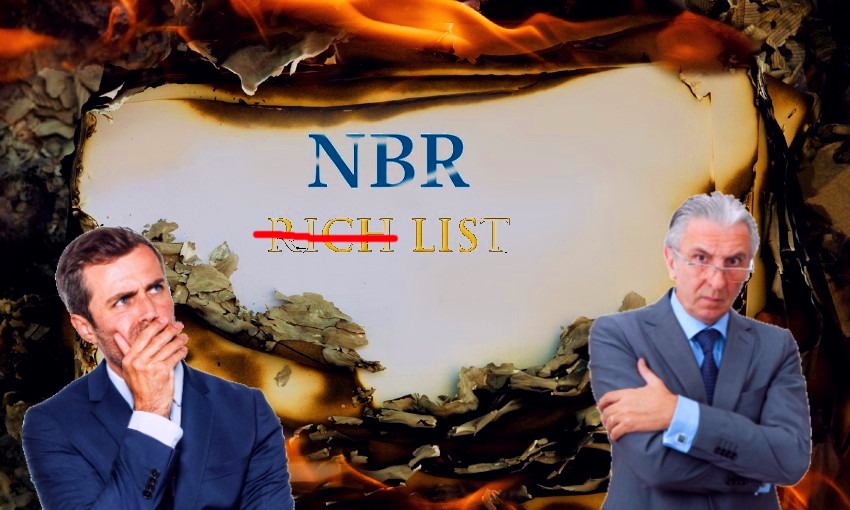 Right now on The Spinoff: George Driver writes about how the domestic tourism boom saved his hometown of Clyde. Andrew Geddis writes about the “final legal coda to the great Southern-Molyneux drama of 2018” that has just played out in the Court of Appeal. Michelle Langstone meets both Professor Michael Baker, and the man who plays him in a new piece of verbatim theatre about the early days of the pandemic. Susan Wardell reviews Common Ground, about the social history of gardening in Aotearoa. And Alex Casey writes about the simple joy of linear television, in a world of entertainment now dominated by far too much choice.

For a feature today, an excellent outline of what asset seizure is and isn’t in New Zealand. Now I admit, my view on it was clouded by some of the horror stories I’ve heard from the US, in which out of control police departments basically extort people. But that doesn’t appear to be possible in New Zealand, either in theory or practice. After my call for feedback (thank you to everyone who had some) I got sent in an excellent explainer from someone who “worked in this area with the police a while ago” – here’s an edited for length version of their comments.

On the face of it, it seems like a pretty blunt instrument which runs the risk of being used improperly, but in reality it is a very useful tool for the Police to tackle the proceeds of crime. Imprisonment is one tool available, but as you know it is not very effective. For example, in most gangs in NZ imprisonment is embedded into their hierarchy structure and is little more than a rite of passage – it is the low level affiliates/members that do the crime & time, but the rewards flow to more senior members.

I’ve seen a couple of quotes in the papers before about how this legislation could sting someone like a hard-working labourer who didn’t keep good records – well yes, but only if that labourer was linked to significant criminal activity, couldn’t give evidence of any of the jobs he’d ever completed, and hadn’t paid any tax. Even then, the police have plenty of other fish to fry.

The Chiefs Wāhine have blown the Blues away in their debut rugby match. After a fairly tight first half, the NZ Herald reports the Chiefs completely took control, holding the Blues scoreless after halftime for an eventual 39-12 victory. Overall, 16 Black Ferns took part in the match, but there was also a heartening number of teenagers on the field, which suggests strong talent is coming through the ranks. The game was also billed as the first ever women’s game of Super Rugby, which seems a slightly odd way to describe a non-competition fixture. But no matter what you call it, it was a highly skilled and hard fought game of footy, and you can watch the highlights here. Writing on The Spinoff, front-rower Alice Soper argues that it has to be used as a catalyst for much more serious investment and competition. And in the men’s comp, the Crusaders will host the Chiefs in next week’s final.

And in a story that broke late last night, former Warriors star Manu Vatuvei has revealed he is facing a series of methamphetamine charges. Newshub reports Vatuvei put a video out on social media just days before name suppression was due to lapse, telling his fans that he wanted to get it off his chest. The charges were filed in 2019 – the year that Vatuvei’s sporting career was suddenly ended after the discovery of a brain cyst. He said he intends to fight them in court.