The National Business Review’s yearly Rich List has celebrated financial wealth for a generation. So what does it mean for good old-fashioned New Zealand capitalism now the NBR is dropping the ‘Rich’ in favour of ‘the List’?

Despite the sickening wealth inequality on planet earth, people love reading about the rich and powerful. And we love to rank other people: best to worst, hottest to nottest, yummiest to yuckiest. Combine those two fascinations and you have the Rich List: a crude yet irresistible assessment of a person’s inherent value, classifying people from the outrageously super rich to the slightly less outrageously super rich.

But it’s when you start to include more complex and subjective variables – which actually better capture a person’s value – that the ranking machine starts to break down. Try ranking the top 10 most honest members of the Labour Party. It’s just not as easy, or as exciting, as measuring their net worth – or how much each of them earns from rental properties.

Which is probably why the NBR’s Rich List has such an enduring legacy. First published under the NBR’s masthead in May 1990, the definitive annual ranking of New Zealand’s wealthiest, and therefore most admired, citizens has been produced by number-crunching business journalists for 30 years. Steven Tindall, Bob Jones, Graeme Hart: such elite fellows have graced the upper echelons of the Rich List over the past three decades, instilling faith in the pursuit of wealth, giving the rest of us a glimmer of hope that the relentless rat race does, with the right kind of luck and acumen, eventually yield the cheddar. 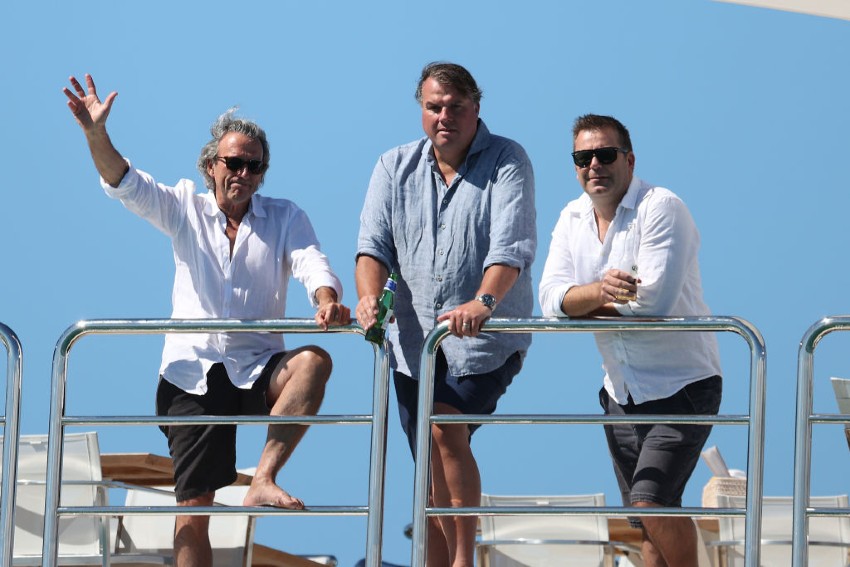 So what kind of world is it when the Rich List, the last bastion of capitalistic celebration, strikes its proud banners, dropping the “Rich” to become simply “The List”?

I’ll tell you what world – a topsy-turvy world! But that’s exactly what the NBR is doing. Henceforth, “The List” is no longer obsessed with the idle rich and their idle fortunes. Instead, it will ostensibly aim to shine a light on those with purpose, who add social value, create employment and do more altruistic things than sprawl on their yachts or do backflips into their vaults of gold and jewels.

To get answers, I contacted The NBR’s senior journalist (and The Spinoff’s former business editor) Maria Slade, and asked her to lay bare the hard-hitting truth. 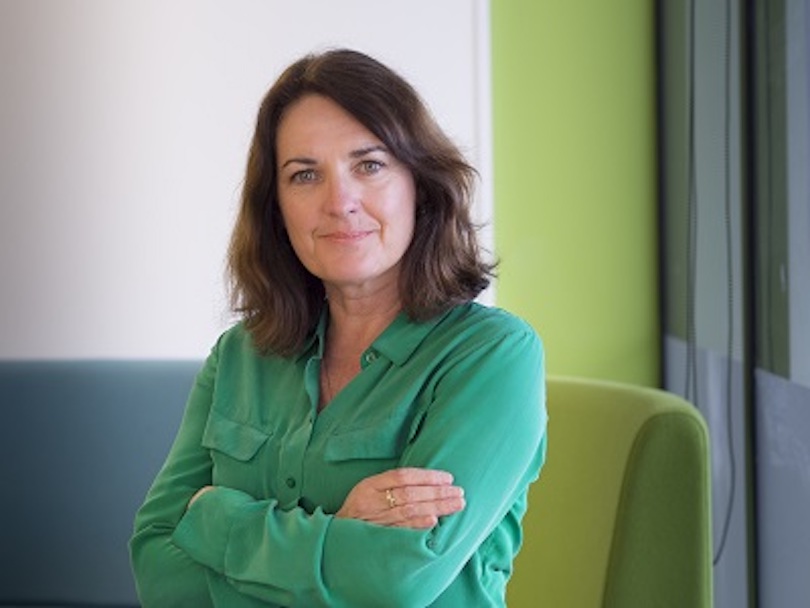 Hi Maria. What exactly is the meaning of this?

Well, with last year’s list delayed because of Covid, we had an opportunity to sit down and have a good think about it, and it became pretty obvious that it wasn’t the right tone for a post-Covid environment.

Indeed, this whole idea of celebrating wealth for wealth’s sake has passed its use-by date. So we thought, “why are we ranking people and what are hoping to say to the New Zealand business community?”

Also, the list was getting really long because our only criteria was a net worth of $50 million, and if you scratch around it’s not actually hard to find people with that kind of wealth, so we needed to cut the list back anyway.

So with the new list, the decision was to get 100 people or families and put them in a few categories, because what was happening was if you just list them purely on their net worth, like in the old list, the property guys really dominate. A lot of people hold property, and there are lots of families with inherited properties who are just kind of sitting on wealth and not really doing much with it.

We thought that’s not really telling the story we want to tell about the people who’re building New Zealand, really, so that’s why they are in a few categories.

What are the categories?

We broke the List up into Property, Make and Sell – which is manufacturing and retailing – Investment, Agribusiness, and Tech and Services. We have 20 in each of those categories, and the idea was to try and shine a light on some of these other industry sectors that didn’t get much of a look in under the old system.

Is there a risk you might anger the gods of capitalism?

Haha. Well, yes, I suppose there is. The thing is we are still ranking people by wealth… we’ve done much more in-depth research on people and had a look not only at what they own, but what they’re doing with it, what kind business they’re building and also how they’re giving back. That comes in all sorts of forms: whether they’ve invested in other businesses or whether they’ve been involved in a climate change initiative, for example.

There are a lot of people in New Zealand who are giving back in that way, and putting funds back into the business ecosystem. We’ve created a new benchmark for ourselves and its turned into a database we can draw from. 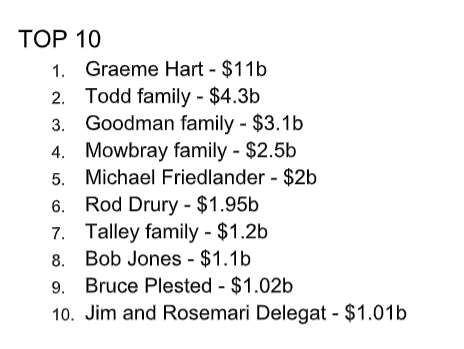 And what about your subscribers – do you think they will approve?

It’s too early to say. It only gets published on Monday [today] so we don’t know. We started to publish a few things around it and we started publishing a new colour profile each day, and those have been very well read, so we’re anticipating that there’ll be a lot of interest in it. We’ve just tried to give the profiles a much better picture of what they’ve been up to in the last 18 months and other activities they might have going on.

It’s going to be interesting going forward to see how people refer to it because of course, it was always the Rich List.

The Rich List does have a nice ring to it.

It does, yeah. It will be interesting to see if people still refer to the people on the list as Rich Listers, and obviously we can’t stop them doing this. So that kind of lexicon; I don’t know whether it will persist. I suppose it’ll take a few years for it to fade away.

Does it take much longer to research and curate the list now?

It has increased the workload greatly. We’ve had a team of reporters that has done an awful lot of work. The profiles are like little mini features on each of these people or families. But we think it’s worth it, we’ve uncovered all sorts of things.

Some of the philanthropic endeavours, for example, have been really interesting: Jeff Douglas, who’s managing director of Douglas Pharmaceuticals, and Sir Christopher Mace have been involved in an initiative to raise funds to buy an iconic farm in Northland, which adjoins quite a bit of DOC land, and they want to return it to public ownership and to develop a great walk track. Douglas has given half-a-million dollars to the project, because he feels that it’s important. So it was quite intriguing turning up some of those things.

So who’s in and who’s out of the List?

We’ve decided anyone who was overseas based who wasn’t doing very much here in New Zealand weren’t worthy of inclusion. So we’ve dropped people like the Spencer family and Ric Kayne, because yes, it’s OK to have wealth, but they’re not really doing anything with it.

Peter Beck from Rocket Lab – he’s a newcomer. He probably should have always been on the list, but it was very hard to judge his wealth. But now with the upcoming IPO, we’ve got a better idea of what his net worth might be.

We interviewed him and he was saying, ‘look, I have two interests in life, building rockets and entrepreneurship’. He will back anyone who’s worked with him who goes off and does their own tech startups, because he just believes that is what you do need to do in New Zealand – build more tech businesses. 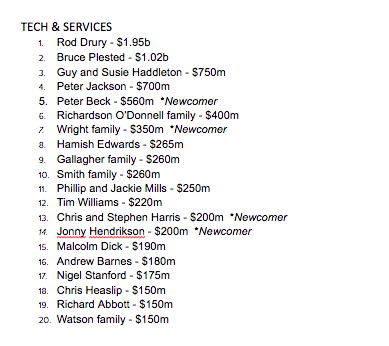 The top 20 tech and service “Listers”

So, in the past year we’ve had the NBR’s owner Todd Scott move into a motorhome, and now we’ve had the “Rich” dropped from the Rich List. What other bombshells does the National Business Review plan to hurl into our lives?

Well, nothing that I know of just at the moment. We probably need to pause and take a breath after all of this. But we are going to be quite interested to watch what some of our listers do in the next year or so.

Is there still a minimum net worth criteria?

So could I be on the list if I was doing really good things?

Haha. Um… well, you’d still have to be reasonably wealthy. It varies from industry to industry. For the property guys, the minimum is around the $300m mark. And in tech and services it’s a bit lower – more around the $140m to $150m mark, because those tech companies haven’t been around as long and they don’t amass as much wealth.

That’s why we did it this way, to have more of a holistic look at what these sectors are doing.

You’re still ranking them by wealth though?

Yes we are still ranking people by wealth. And we are going to have a top 10. So we’re just taking the top 10 out of those five lists of 20. But within the lists of 20, they are also ranked by wealth.

I mean, you know, it is about the money as well. We couldn’t really get away from that. The people want to know.