This time last year, Central Otago correspondent George Driver was wondering how his tiny, tourism-dependent town would survive the pandemic. Thanks to New Zealand tourists, it didn’t just survive, it boomed.

A year ago, Dylan Rushbrook, the head of Tourism Central Otago, made a difficult presentation to the council. The industry was in a state of collapse.

“We were forecasting a 40 to 60% drop in visitors and operators were saying they weren’t getting any bookings at all,” Rushbrook says. “It was looking grim.”

As the country emerged from lockdown, I too wondered how my hometown of Clyde could survive. No international tourists, rising unemployment, a record government deficit. You could almost hear the belts tightening around the country.

Businesses in Clyde, who had lost the busiest time of year to lockdown, were stoic in the face of excruciating uncertainty. “We’ll open our doors and see what happens,” one said. It was looking like a long winter.

What followed was remarkable.

The country came to Clyde.

“When people were told to keep their distance from others, coming to Central Otago in winter seemed like a good option,” Rushbrook says. The town’s main street soon became reduced to one lane as it was almost permanently lined with cars of visiting New Zealanders. The housing market ploughed on – a relocated villa on a 600m2 section on the main street sold for $1.3m (for weeks there was a persistent and erroneous rumour that Mike Hosking had bought it and was moving to town). A film crew intermittently closed the town centre to film a new TV mini-series. A developer announced plans for a $200m retirement village on the outskirts of town. Thousands of boozed young people flooded in (where did they come from?) for the Wine and Food Festival which, despite gale force winds, was the busiest in years.

A year on from his bleak speech, Rushbrook says the visitor spend in Central Otago is looking completely unaffected by Covid-19.

Much of this success was driven by the Otago Central Rail Trail. DOC figures show the numbers on the trail were up 67% on last summer, the second highest growth rate of any monitored track in the country and by far the highest for a multi-day trip. This in a year when numbers on the country’s rockstar walks plummeted – the Tongariro Alpine Crossing and Franz Josef were both down 72%.

It’s also been a boon for businesses on the rail trail, who are reporting a record season.

“The last two months have been phenomenal,” says Colleen Hurd, owner of Ophir’s Pitches Store, a short bike ride off the rail trail. Despite the borders being closed, Pitches Store, in Ophir, has had its busiest season ever (Photo: Tourism Central Otago/James Jubb)

Set in a 140-year-old general store and butchery, Ophir’s Pitches Store is run by Hurd and her husband David. The couple moved to Ophir from Auckland in 2006 and restored the schist buildings, turning them into accommodation and a restaurant which opened in 2012.

A year ago, the business had just lost six weeks of the busiest time of year to lockdown and was braced for what might come next.

“We just didn’t know what was going to happen. Are people going to come out? How long will this last?”

But within weeks things had turned around – it had so many inquiries it opened during winter for the first time.

“People wanted to come for the weekend. They wanted to get away,” Hurd says.


“Then it went gangbusters. By mid-October we were getting far more bookings than normal and it just continued. It’s been our busiest season ever – it’s 50% up on last year and last year was one of our busiest years.”

When the frosts begin tourists usually desert the trail, but this year the bookings continue.

“We’re looking like we’ll be booked out for all of May.”

Forty-two kilometres down the trail at Wedderburn, Lorraine Duncan sounds exhausted. She has run a farm in Wedderburn with her husband for 27 years. When the trail opened 20 years ago, they decided to let out a few historic cottages on the farm as accommodation. Wedderburn Cottages became an unexpectedly successful sideline business, growing to accommodate over 50 people a night with a staff of five – what sounds like a sometimes overwhelming prospect for Duncan.

“It’s been unbelievable,” she says. “Everyone’s looking forward to winter for a break. It’s just a little busy every night, which is a great thing, but man. It’s a lot of washing.”

Wedderburn Cottages is also booking out through May – but Duncan already has her mind on the annual bull sale, coming up on May 21.

“Farming is our main thing and we built this accommodation as a sideliner for the start but it’s turned into a bit of a booming business.”

Seemingly the busiest place on the trail is a settlement I’d never heard of. Last month my parents returned from a midweek campervan trip raving about Waipiata. Where? Seven kilometres off the Pigroot (State Highway 85), between Gimmerburn and Kokonga, Waipiata is literally in the middle of nowhere – a handful of houses, two churches, a bowling club, a rodeo ground. The main street is called “Main Street” and ends when it hits the rail trail. And it is also home to what is surely the busiest pub in the Maniototo. 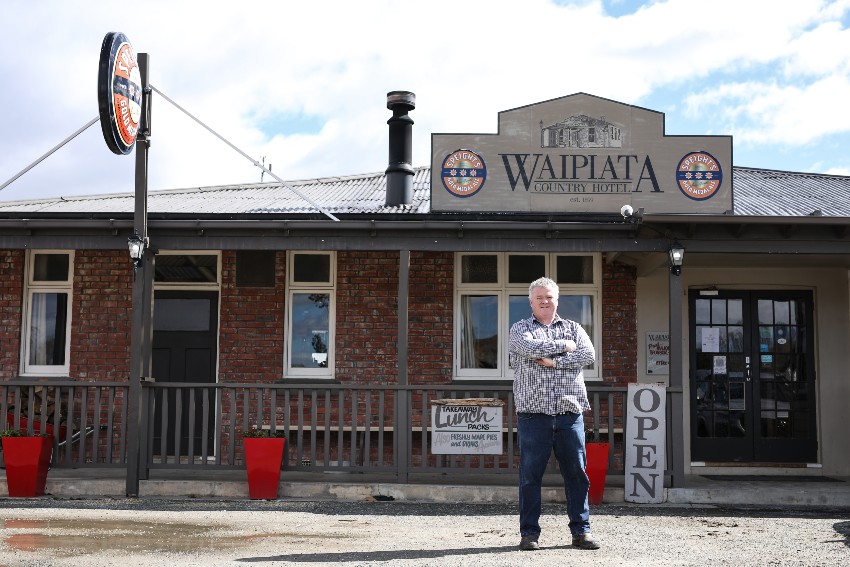 Mark Button and his partner Nikki moved to Waipiata from Taranaki 10 years ago after biking the rail trail and seeing an opportunity for trail accommodation. The couple built a bed and breakfast, Tussock Lodge, in 2012 and bought the Waipiata Country Hotel six years ago.

But when the Covid-19 alert system was announced last year, the business was hit hard. Button had 150 booking cancellations in a single day. When the lockdown was announced a couple of days later they had to give away piles of perishable food to the community.

“That was when reality hit,” he says.

But the boom times began straight after lockdown, when it introduced a click and collect service, Waipiata Eats, under level three.

“From there it’s been fantastic. What we lost in lockdown we made back and a wee bit more, which has been great.”

Now business is up 60% and the pub is doing up to 400 meals a day – an extraordinary number considering the Maniototo region only has about 1600 residents. It was a number so extraordinary, in fact, that I couldn’t help being sceptical. Four hundred meals a day, in a place in the middle of nowhere that I had never even heard of? I had to investigate further.

My partner and I arrived at the pub at 5pm on a Saturday evening, just as the sun began to set. Inside, the bar was already full, groups drinking jugs among the decor of antique weaponry, sports trophies and Speights posters. After queuing for five minutes for a beer, my partner and I found the only seats left, two stools wedged over a wood pile beside the fire. We perched and watched as the people kept coming and the queue grew out the door. 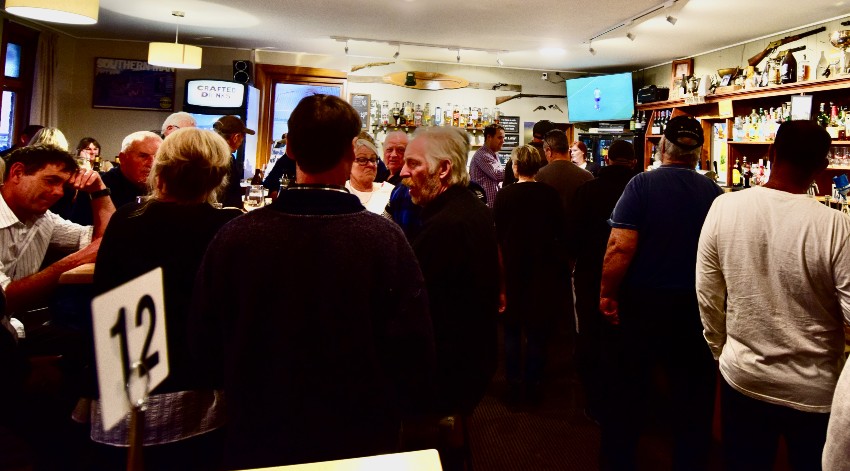 The Waipiata Country Hotel is surely the busiest pub in the Maniototo
(Photo: George Driver)

My eagle-eyed partner snaked a seat at a table just as a couple left and we ate excellent homemade pies – there are over 14 varieties on the menu – sharing a table with two Christchurch couples enjoying their third night on the trail. We were soon joined by a couple from Alexandra who had parked their campervan at the nearby domain and had come for a night out at their favourite country pub.

My partner yelled back and forth with the couples to be heard over the din of drinkers and I sat back and soaked in the crowd which filled every space in the room: Gumboot clad farmers in woolen jerseys coarser than steel wool; young families entertaining restless children on the floor; outside a group of bogans piling out of a bright green wagon on a country crawl; a steady flow of boomers from bikes and campervans. A dog was circling beneath the tables, waiting for someone to drop a chip. It was like a microcosm of New Zealand.

The country had come to Central Otago.