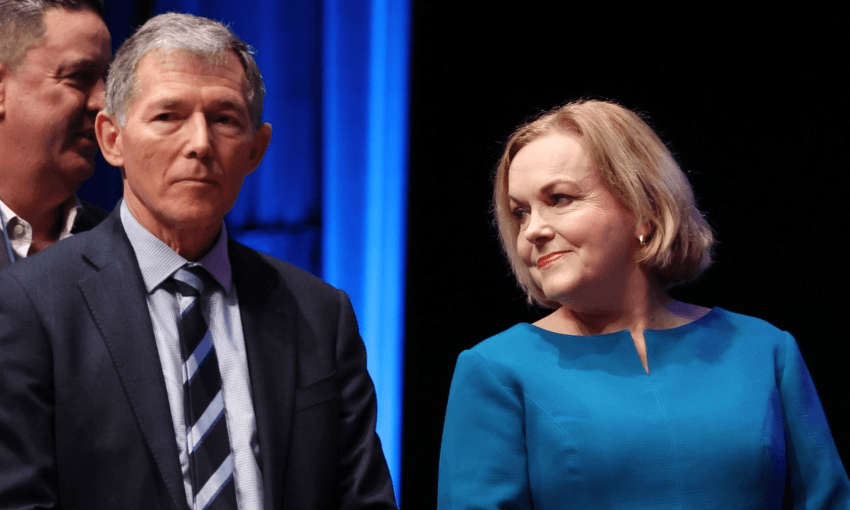 National has emerged from their conference to a brutal set of headlines, from which any reasonable observer would conclude the party’s divisions have not healed. By my count, three entirely distinct incidents occurred from which you could make that case, and I’ll outline them all here before covering what party leader Judith Collins had to say.

The first concerns former leader Todd Muller. One News reports he will not be part of caucus meetings when he returns from leave, which he is currently on to care for his sick wife. It’s unclear whether that was a decision made by Muller, or made by Collins on Muller’s behalf – Stuff’s Henry Cooke reports a comment from party whip Matt Doocey that made it sound like it had been Muller’s own decision. Either way, it is a reminder of the circumstances that led to Muller announcing his resignation at the next election, which is that he had been briefing against a colleague.

The second concerns the Young Nats, who have reacted with anger to the caucus to decision to vote against the conversion therapy ban in parliament. The NZ Herald’s Thomas Coughlan reports they distributed rainbow ribbons to the MPs, and it is understood that the speech was used “to highlight the youth wing’s disappointment.” Some MPs are believed to have been against that caucus decision, and party policy generally is in favour of a conversion therapy ban.

Finally, the party president was reelected, but in the process a former speaker and stalwart MP made a dramatic resignation. Sir David Carter was challenging Peter Goodfellow for the presidency, with some in the party seeing Goodfellow as being heavily involved in a series of disastrous candidate selections. However, when Goodfellow won, Sir David resigned from the board, and Radio NZ’s Jane Patterson reports he went out saying he had “no confidence” in Goodfellow. Politik’s (paywalled) Richard Harman notes the party now has no farmers on the board, and it is understood farmers are now feeling unrepresented in the party hierarchy – a real danger for National when Act are surging in the rural world.

As for where the party sits relative to the rest of the political landscape, little movement was made. Toby Manhire was sitting in on Collins’ speech, and noted the party campaign of “Demand the Debate” has yielded precious little in terms of new policy, none of which was launched at the conference.

So what did Collins have to say? As Stuff reports, she told members the next election is winnable for National so long as the party stays focused. Collins heavily criticised the performance of the government, saying in particular they had failed on housing, child poverty and mental health services. Speaking again as a hopefully reasonable observer, she’s got a fair point – the government has objectively made little progress in any of these areas over four years. But that message may not get through with Collins in charge – a Newshub poll released last night showed almost half of National voters believe she should be replaced as leader.

Meanwhile the Green Party conference has also taken place in the shadow of National’s event. Political editor Justin Giovannetti reports Co-leader James Shaw easily saw off a rare challenge from member James Cockle, with Shaw then using his speech to talk up his view that the party had made more gains by being in a cooperation agreement with Labour, rather than in opposition. There’s no doubt some members will disagree with that sentiment, and dissent from it – even if the conference being largely closed to the media makes that difficult to verify. But that’s a world of difference away from what the other party having a conference last weekend went through.

Dr Ashley Bloomfield has had to correct the record over conversations he had regarding the evacuation of a Covid-positive UN worker from Fiji. Stuff reports Dr Bloomfield’s comments were corrected on the basis that he had “since recalled” what actually happened, despite all of this happening in the last few weeks. National’s Chris Bishop wants Dr Bloomfield to front up over it in front of the select committee, in particular regarding the degree of involvement former PM Helen Clark had in it all, reports the NZ Herald.

The timber shortage is causing prices to rise, and for construction jobs to get bogged down in delays. I spoke to two businesses that rely on timber for their work, and they’re desperately worried about the effect it is having now, and could go on to have with the ongoing housing crisis. In related news, Stuff reports building minister Poto Williams has denied the government is looking at imposing limits on timber exports.

Shareholders have voted to close down fuel refining operations at Marsden Point, and convert it over to an import-only terminal. Radio NZ reports the decision was near-unanimous, with hundreds of jobs likely to be lost. Both MBIE and Refining NZ Chief executive Naomi James said the decision was unlikely to make New Zealand any more vulnerable to fuel insecurity – though other analysts have strongly disagreed with this sentiment.

Travel around the country could be difficult today, particularly in the South Island. Radio NZ reports heavy snow has blanketed much of the island, closing some roads and making others slow going. If you do have to be on the road today, it’s always a good idea to check the NZTA Journeys site for disruptions first.

A correction: Google co-founder Larry Page holds New Zealand residency, not permanent residency as was stated in Friday’s Bulletin. Apologies for the error – it matters to the wider story. Stuff reports Page was granted residency under the Investor Visa category, which requires holders to invest at least $10 million in NZ over a period of three years. Page has a net worth somewhere in the realm above $100bn.

Right now on The Spinoff: Aditya Vasudevan, a New Zealander in Sydney, writes about whether you can ever really capture the feeling of going home again. Olivia Sisson pays a visit to a grower of saffron, the world’s most expensive spice, in Canterbury. Michael Andrew writes about how Wynyard Quarter has developed a decade after opening. Sharon Lam reflects on the classic Kiwi tradition of Athletics Day and how much she hated it. Madeleine Chapman looks back at the Olympics shunned by dozens of African countries because New Zealand wanted to keep playing rugby against apartheid South Africa. And Stewart Sowman-Lund delves into the pop-star specific club nights currently taking over music venues, in the era of closed borders.

For a feature today, a bleak and heartbreaking story about a father slipping away from reality and into conspiracy theories. Vice News has interviewed a survivor of a major school shooting event in the US, which became a totem pole for the gun control movement. But for one student at Parkland, their father is now convinced that the whole event was a lie, with tragic consequences for the family. Here’s an excerpt:

But until January, that was as far as it went. Then Bill’s father saw a video of Georgia Rep. Marjorie Taylor Greene harassing Parkland survivor David Hogg in 2018, while he was visiting Washington to advocate for stricter gun control. Greene has repeatedly voiced support for QAnon and claimed the Parkland shooting was a hoax. “He is a coward,” Greene told her followers.

Ever since then, Bill’s father has become convinced the shooting his son survived was a so-called “false flag” event and that the shooter was “​​a radical commie actor.”

“From there it snowballed into what he is today, believing that if the government is able to overthrow an election, then everything else is probably a lie too,” Bill added.

Triumph for the Northern Mystics, who have won their first ever ANZ Premiership title. The NZ Herald reports they saw off the Mainland Tactix by just two goals on Sunday night – a fitting end after a closely fought competition. MVP for the match was midcourter Elisapeta Toeava, who played well all season. Both teams are expected to have very competitive rosters again next time around, so for the Tactix there might be another title shot soon.