The Green Party presented a united front at its AGM over the weekend as James Shaw held onto the co-leadership with a resounding win over a challenger. Justin Giovannetti was there.

Update: After this story was published the Green Party disclosed that a further 20 votes were cast in Saturday’s co-leadership vote for neither James Shaw nor challenger James Cockle. The party chose not to report the 20 delegates who voted to reopen the co-leader nomination and not support either candidate. Shaw won 116 of 140 votes overall, or 83% support from all delegates present.

The Greens voted overwhelmingly to support their co-leaders and the party’s role in government at a weekend conference where James Shaw and Marama Davidson vowed to push Labour harder. Speaking to party faithful in Lower Hutt, the two co-leaders sketched out a plan for the next two years, one where they are simultaneously in government and critical of it. Most of their firepower, however, was reserved for the opposition.

Davidson accused the National Party of being haunted by “the ghost of Dan Brash” and said the opposition was using lazy and dangerous rhetoric. One of the strongest rounds of applause she received from the nearly 200 members was when she vowed to continue meeting with gangs.

Shaw went into the Annual General Meeting facing the party’s first contested leadership vote since 2013, with his challenger arguing that the climate minister was too timid and centrist, promising a hard left turn. He described the party under Shaw’s co-leadership as “Labour’s little helper”. 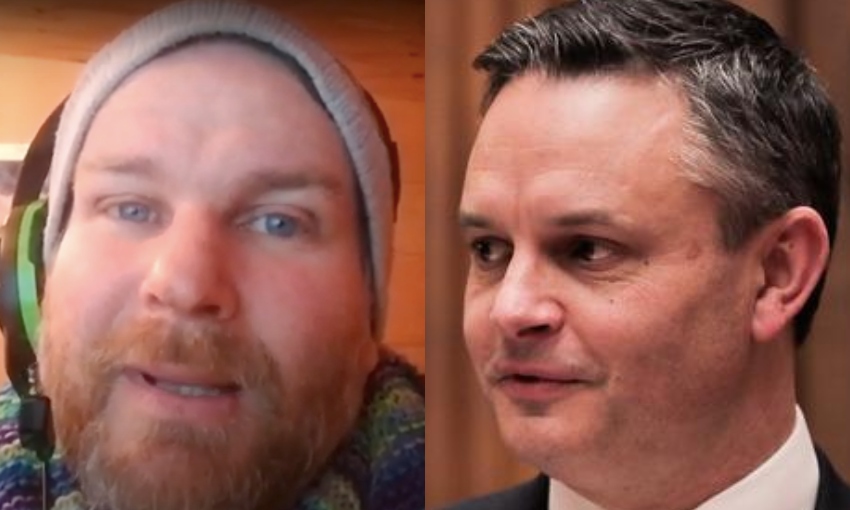 However, the potential for disunity collapsed, with Shaw receiving 116 delegate votes to his opponent’s four on Saturday evening. Davidson was unchallenged. The show of support for Shaw was even stronger than the vote last year on the party’s support agreement with Labour, which saw 15% of Green delegates give it the thumbs down.

The outwards display of unity was in contrast to the National Party, which held a conference at the same time several hundred kilometres north in Auckland. There were no leaked messages from MPs or expressions of no confidence in leading figures, at least not publicly, in the Hutt Valley.

While both Shaw and his challenger, Dunedin activist James Cockle, spoke to the party and answered a number of questions from delegates, they did so in secret. The entire weekend conference except for the speeches from the co-leaders was off limits to media and the public.

The party co-conveners who ran the retreat took questions from media as well, but would not speak about what was discussed or what decisions were taken. There had been talk before the weekend about whether the party would move away from splitting its co-leader positions between a man and woman. It’s unclear whether the move was discussed at all.

Speaking to delegates yesterday afternoon, a day after his win, Shaw highlighted the party’s successes in government. From fossil fuel free Kiwisaver funds and an expanded warm homes programme to subsidies for electric cars, he said the Greens were bringing about lasting change, if not perfection. “There are people who say we have not gone far enough. But no one should ever think that the hard work is not worth it because we don’t get everything we want,” he said.

As the minister leading the government’s answer to the Climate Change Commission’s proposed programme of emissions reductions, he said the Greens were in the driver’s seat for tackling New Zealand’s environmental response. “Let’s commit to working together, between and across generations, to put aside our imperfections, to find solutions to the greatest challenges of our times,” said Shaw.

Where her co-leader focused on the environment and largely ignored the opposition, Davidson reiterated the party’s work to uphold Treaty of Waitangi principles during her speech on Saturday.

Vowing to help “re-indigenised Aotearoa” in the future, she said the country was facing “a reckoning” from a past and present built on colonisation. It was clear from Davidson who she believed the impediments to that better future are: Judith Collins and the National Party.

She described National as “abhorrent” and a party that has “smeared for generations” people in New Zealand by holding onto power selfishly. She promised to keep calling out narratives that she called dehumanising, stigmatising, dangerous, racist and classist.

However, she said more needed to be achieved with Labour. The name of prime minister Jacinda Ardern was not mentioned by the leaders. That includes moving to require a warrant of fitness for rental units and giving the government more spine to act on housing. “We have the Greens in government, but also not in government,” she said with a chuckle.