Good morning and welcome to this one-off edition of The Bulletin, covering major stories from the last few weeks.

A quick preamble to this: Today’s special edition of The Bulletin is all about filling you in on some of the stories you might have missed over the summer period. Perhaps you had the radio on in the car and weren’t really listening to the news, perhaps you skipped past the front page of the paper to go straight to the cryptic crossword. Either way, things kept happening, and here’s a reminder of them.

Heavy pressure continues to be placed on managed isolation facilities. Radio NZ reported last week that spaces are likely to be “extremely limited” for several months, with no immediate plans for more facilities to be put into action. Meanwhile, the NZ Herald reports all travellers are likely to be asked to return a negative Covid-19 test before getting on a plane to New Zealand, as opposed to just certain countries at the moment, with more infectious strains taking hold overseas. Dr Siouxsie Wiles has gone into those new strains and how they developed in more detail, along with what it’ll mean in New Zealand. Also, Stewart Sowman-Lund has looked at a few key numbers and what they say about our current Covid status as a country.

Meanwhile, in the politics of Covid: Justin Giovannetti reports pressure is being put on the government to accelerate the rollout of the vaccine, particularly in light of those aforementioned strains. And Māori Party co-leader Debbie Ngarewa-Packer calls on the government to boost border controls for the same reason.

The housing market is boiling, with property investors dominating sales, and a low number of new listings. The first of those points comes from this explainer by Stuff’s Miriam Bell, who reports investors are buying at higher rates than first home buyers coming into the market. The second point comes from a One News report into expectations that the market will continue to get more expensive over the year.

Meanwhile, a worrying development for those who do actually own (or at least part-own) their houses: Radio NZ reports mortgage arrears are rising month on month, raising the prospect of a wave of defaults. This is coming at the same time as massive demand for credit, to buy in the over-inflated market. I’m not an economist by any stretch, but it’s hard to see how any of this ends well.

A multi-day standoff took place at Waikeria Prison, with significant damage being done to the facilities in the process. The 16 prisoners holding out surrendered, after a truce was brokered by Waiariki MP Rawiri Waititi. As Stuff reports, the families of some of those prisoners said their complaints about the conditions in the prison made well before the siege were not acted on. It is also worth noting that earlier in the year the ombudsman’s office went to Waikeria, and found conditions “bordering on inhumane”. Justice reform advocate Sir Kim Workman wrote on The Spinoff that anger among prisoners is understandable, because of the slow pace of reforms that would make prisons more humane.

The political year won’t start in the same way as it normally does, with the annual gathering of politicians at Rātana. Radio NZ’s Katie Doyle and Te Aorewa Rolleston report that internal dispute at the pā means this year’s celebrations will only be open to church adherents. Te Tai Hauāuru MP Adrian Rurawhe, who has close ties to the Rātana movement, said it was an unfortunate situation.

In terms of other set piece type events to start the political year, the upcoming Labour caucus retreat looms large. We’ve republished a piece by Business Desk editor Pattrick Smellie, which is insightful on how important the next six months are for what the rest of this government’s life will look like. To put it bluntly, if they don’t get moving immediately on the big stuff in their agenda now, it probably won’t happen at all.

Police in Wairarapa were pulled up late last year over photographs taken of Māori youth. The Radio NZ story, by Te Aniwa Hurihanganui and Hamish Cardwell, resulted in an admission from the police that the photos were illegally taken. The process of the photos being taken also sparked serious concern – some people described it as basically officers insisting on snapping young people who weren’t doing anything wrong. The IPCA is now investigating.

There would have been a bit about this in the final Bulletins of last year, but the annual Christmas spending splurge was thrown into difficulty by supply chain issues. Newsroom’s Laura Walters put together a useful piece about how the issues were about more than just the impact of Covid-19, and how there was a snowball effect taking place when things went wrong. As Corazon Miller from One News reports, it isn’t exactly over just because Santa has been and gone – the issues themselves will linger, and will likely result in consumers paying higher prices for goods.

And in news that happened yesterday, Rio Tinto’s deep South smelter Tiwai Point is going to stay open for another few years at least. The NZ Herald’s Hamish Rutherford reports the details of the deal between Rio and power provider Meridian Energy haven’t been released, but it also includes Contact Energy. The government’s expected deal on transmission pricing is also still in the works – they’re waiting to see what the plan is to remediate the site once Rio Tinto finally packs it in.

Internationally, the Trump administration is close to being over, with the sitting president now the first in history to be impeached twice. There’s more on that below, but in brief: The charge against Trump is one of inciting insurrection, after the events of last week. Some legislators from the Republican Party have also voted for impeachment to proceed, and this piece from The Atlantic gives a useful outline of why that difference and others make this impeachment much more of a threat to Trump than the last one. 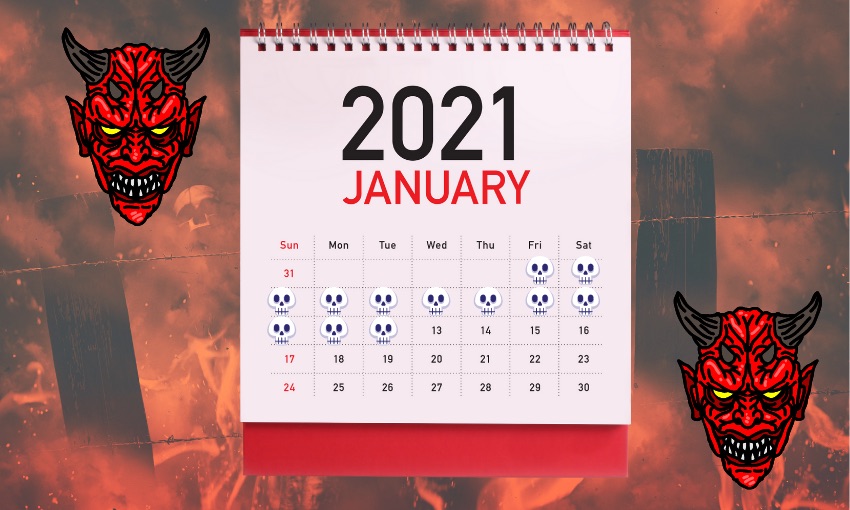 Right now on The Spinoff: Well, not right now exactly – this is more a selection of highlights published over the last few weeks.

I’ll start with our coverage of the drama currently going on in the US: Michael Blake outlines why it matters that Trump has been impeached again. Dylan Reeve writes about the internet sleuthing techniques being used to uncover the identities of the more threatening Capitol-invaders. Tom Birkett writes about the connections between far-right ideology and the protesters appropriation of Norse mythology. Simon Bridges has a thoughtful review of a book (A Time to Build) which has plenty to say about how the US – and particularly the Republican Party – ended up in this mess. I report on the aftermath of the riot on social media platform twitter, and how a subsequent purge has seen some New Zealand users lose their accounts.

In other news: Sherry Zhang writes about the ongoing exploitation of unpaid internships. Paediatrician Jin Russell writes about the people the health system is currently leaving behind. A group of us write about the big issues on which news in 2021 will hinge. Emily Writes looks at the somewhat weird and dreadful start to the year, and how it bodes ill. Danielle Bethune writes about the brushes with parental death she’s had to deal with, as the daughter of radical environmentalist Pete Bethune. And I speak to a local practitioner of sea shanties to get their thoughts on the genre going viral on social media.

And something cool to read about The Spinoff in 2020: Thanks to the support of our members, it was a really big year for us, and we reckon we accomplished a lot. Duncan Greive and Toby Morris have put together a piece that outlines it all, with both small details and big numbers.

In sport, indulge me on sounding pretty cheerful on this one, because it’s a very welcome development. The summer schedule for the White Ferns was released just yesterday, and New Zealand will be playing against both world champions Australia and a very good English side. As Radio NZ’s Clay Wilson reports, the confirmation has been a long time coming, with Covid making firm plans difficult.

In terms of the players who’ll be important, several have been playing in the Australian Big Bash. That’s played at a higher standard to the Super Smash domestic competition, which has itself seen some dominant performances – Amelia Kerr, Anna Peterson with the bat, Arlene Kelly and Frankie Mackay lead the wickets. But a lot is likely to come down to Sophie Devine, who returned to the competition by setting a world record for the fastest WT20 century.

Finally, a bit of housekeeping: The Bulletin’s normal service will be back on January 25, and will then run uninterrupted for another year. However, in 2021 there will be a bit of a change: You might notice it turning up later in your inbox, at more like 7.30am. No joke – we’re partly making that change to allow me to get out of bed a little bit later in the morning, relative to the 5am starts I’ve had for the last three years. But it’ll also make the Bulletin an overall better read, because there’ll be a chance to include more of the morning breaking news agenda. Hopefully it’ll still fit in with your morning routine too.