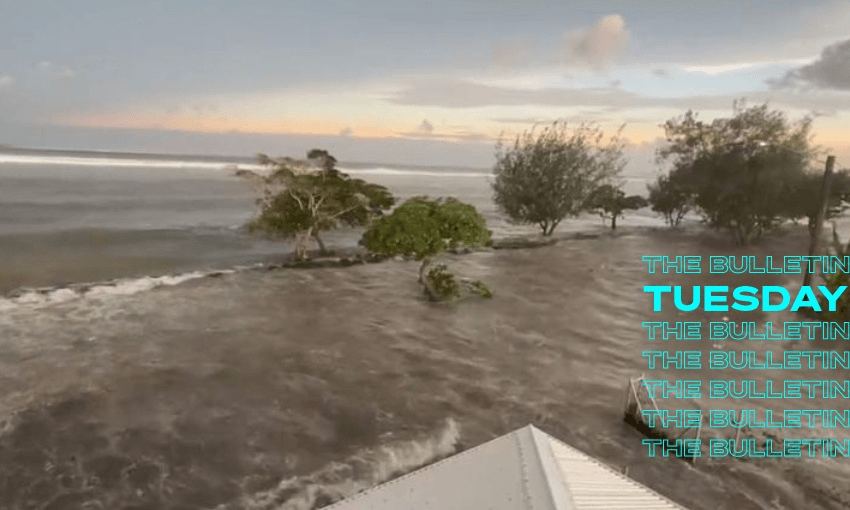 A tsunami wave in Tonga after the eruption. (RNZ/Dr Faka’iloatonga Taumoefolau)

An anxious wait for news from Tonga

A tsunami wave in Tonga after the eruption. (RNZ/Dr Faka’iloatonga Taumoefolau)

The first humanitarian aid is headed towards the country, however Tongans around the world await messages from family, Justin Giovannetti writes.

Tongans around the world are still waiting to hear from families in Tonga. “The silence is deafening,” The Spinoff’s Sela Jane Hopgood writes about the wait since Saturday’s underwater volcanic eruption. Her messages to family have gone unanswered. It’s a situation many in New Zealand are currently living, checking to see if their texts are getting through. Initial reports still suggest there have been no mass casualties, but one death has been reported by Stuff. While electricity and the local phone system has been restored, the country’s main cable was broken by the violent eruption, cutting off communications with the rest of the world. Repairs could take weeks.

Some messages have started to get out, asking for water and food. A thick blanket of volcanic ash has contaminated local water supplies and heavy waves may have inundated water systems. A tsunami has also damaged local infrastructure, including homes, businesses and boats. The country’s cabinet met on Sunday night and asked for assistance, Reuters reports. The Red Cross has warned that the country is “cut off from the rest of the world” after the worst Pacific eruption in decades. There have also been a few messages that have gotten through, including one from someone on an outer Tongan island who told Stuff damage was more limited and they were able to hold regular church service on Sunday.

The first humanitarian supplies are on their way to Tonga. After a reconnaissance flight in the morning, a New Zealand air force transport plane with water and other supplies was ready to take off yesterday afternoon, according to One News. Because of possible damage to Tonga’s main airport, the supplies will likely be air dropped from the back of a C-130 Hercules. Because communications by satellite phone have been spotty, the government is waiting for a better sense of what’s needed before dispatching navy ships to the country. Australia has also sent an air force surveillance plane to Tonga and is readying a ship. Aid agencies met yesterday to coordinate their efforts, RNZ reports, with Oxfam confident it will be able to get a team over with desalination gear.

There are warnings of acid rain across the Pacific after the eruption. As the NZ Herald reports, a massive cloud of toxic gas is hovering over the Pacific and the Fijian government has asked people to stay inside when it rains. The sulphur dioxide in the atmosphere is currently being pulled east of New Zealand by cyclone Cody. Niwa has noted that while sulphur dioxide can act as a long-lasting aerosol that can reflect incoming sunlight and lower global temperatures, there’s probably not enough in the atmosphere to significantly cool global temperatures.