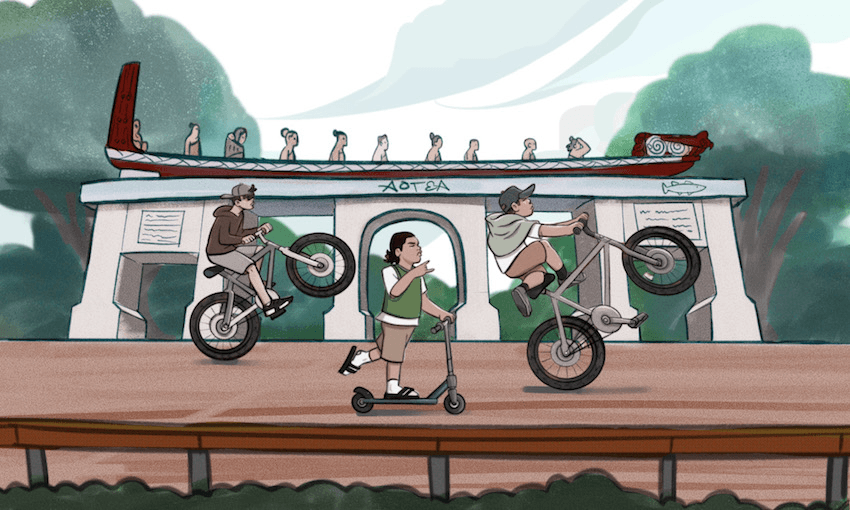 The Sunday Essay: Born and raised in Pātea

There is something in the water here, the ever-flowing awa that carries down Taranaki Maunga himself.

I was born and raised in Pātea, a state highway town on the western fin of Maui’s great fish. As was my father and his father, my family’s residing here stretches back until the waka: Aotea. That’s ultimately where the history of this town began – the intrepid captain of that mighty ship sailing an ocean and settling here in the shadow of Taranaki Maunga. It is from this that the town derives its name, Pātea-nui-a-Turi (Where Turi laid down his burdens). And I suppose where a macron was lost somewhere in time.

It is a place of tremendous wonder and renown, every man and woman under the age of 50 having heard the synthetic charm of Poi E, the unofficial national anthem of our island nation. And though few but the fanatic will recognise the next waiata by its name alone, it is the same Patea Maori Club who sang Aku Raukura, altogether performing half the soundtrack for Taika Waititi’s Boy by themselves. Not bad for a rōpū with only one album, released in the 80s.

A good number of those kaihaka still roam the streets to this day, their strides a little less long and their backs a little more stooped but their air just as powerful as it’s remembered in that famous music video featuring an off-brand Michael Jackson and a rascal of kids who now have grandkids. Mana, once gained, is never lost. Regrettably, some have moved on from this world, including the master Dalvanius Prime himself. E ngā mate, haere ki Hawaiki, ki Hawaiki nui, ki Hawaiki roa, ki Hawaiki pāmamao. Those who have passed on, depart to Hawaiki, to great Hawaiki, to long Hawaiki, to distant Hawaiki. Even the magic of these loved ones lost remains today in ways less material.

The wonder of this little town is most obvious in its character and characters, its serious whimsy revealed in the buildings and the roads and the sitcom of personalities that occupy them.

There’s Koro Jim, who has been a minister as long as I’ve been alive and has even longer been known to walk the town from tip to toe before the rising of the sun, getting in a bit of fitness and surely checking the tide before the surfers can get their fix. And there’s his partner in the divine, Koro Syd, whose voice has always sounded to me like the trumpets of Peter, our koroua’s voice as smooth as he is kind and gentle. Not to forget Tai with a body built for the NBA patrolling the primary school-made berry farm; Luther with her handy dandy paintbrush making the town beautiful; and Aunty Janine hassling the kids on their way home from kura, ensuring they all have shoes on their feet and food in their cupboards. I’m not entirely sure what a woman must do to earn the honour of a damehood, but the Queen can consider this Aunty’s nomination. Although a sainthood might be more fitting.

The kids themselves are the most colourful of the lot, tearing up and down Egmont Street on their scooters and their bikes, oscillating from dusk to dawn between the pools and the library and the skatepark, doing manus here and mean as jumps there. These are the fun and games even our kaumātua would recognise, only the bikes and the scooters are a little more flash and the lifeguards don’t growl you for doing bombs anymore.

Over their adventures, watching a magnificent ship, is Turi’s grand journey memorialised in concrete and raised high in the heart of the place. What else are the young to do being reminded endlessly of their forebearer’s courage and genius? Of course they must journey across the town, perfecting their wheelies and their tail whips and the stretch before the v before the bomb, every jet of water shot from the pool an exhibition of their ancestors’ mastery over water. It is as the old people put it: Ka mua, ka muri. Walking backwards into the future.

There is something incredibly special about Pātea that can only be captured in experience. You have to dip your feet in the iron black sand of Mana bay decorated with a time-forgotten wharf and a spotting of sleeping seals, walk the cracked concrete of our burned- down meat works brought halfway back to life by the spray paint art of our rangatahi, and be witness to an annual median income of only $19,000 juxtaposed with the will of a people who will allow no economic metric to define them.

There is something in the water here, the ever-flowing awa that carries down Taranaki Maunga himself. The old people say he was a tohunga in his day and for the power of his wai this might very well be true. And so for his grace and Turi’s and all who have come afterwards, this settlement has endured for almost a thousand years. Through times of peace and war, cooperation and colonisation, economic expansion and economic collapse, Pātea has remained. And though the scars of this turmoil are evident even to those who only drive through, the people of this land have always remained steadfast.

I’m not alone in feeling such awe and allegiance to this town, even the very young and the very old share the sentiment. The former can be demonstrated in the most comically modern of ways through Gamertags, PSN names, Instahandles and on Snapchat, so many of our rangatahi announcing their residing here in big bold 273s and PTAs. And though I cannot claim to be very young any more, my own bio begins in much the same way – “Born and raised in Pātea”. It is a kind of 21st Century pepeha, I suppose, the people of this place proclaiming to all they come across online that they are of the western fin, in the shadow of Taranaki Maunga. Or as the old people would have put it: