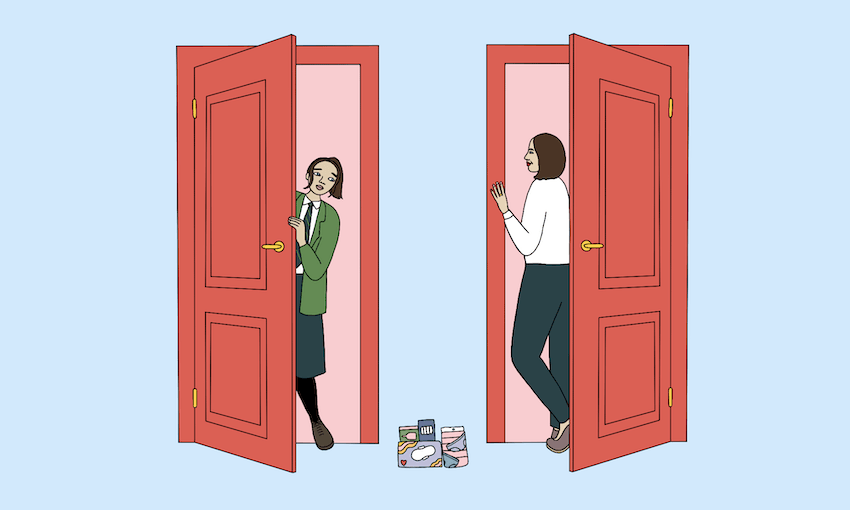 The Sunday Essay: My last period

The first period comes suddenly but the last period takes a while, writes Niki Bezzant.

It’s a thought I have every time I have a period, now – which is becoming a more and more rare and unpredictable event as I head toward my 52nd birthday.

Fifty two is the average age a woman will go through menopause in Aotearoa. I won’t know if I’m there, though, until I can look back and say it’s been a year since my last period. Menopause is really just one day, diagnosed in retrospect.

So I’m technically in late perimenopause; a stage defined partly by more and more irregular menstruation. Looking at my period tracker app I can see the crazy ride my hormones have been taking me on mapped out in graphic form: here’s a cycle of 46 days, then 25, then 15, then 23. Then, over summer, a cycle of 134 days; four and a half months without bleeding. That’s when I thought I might be heading for the magical one-year mark. But then that bumpy road kicked in again: 26 days; 22; 65. The app doesn’t know what to do with me.

I was more prepared for the start of my periods than I was for the end of them. My first period was in 1983 and I knew to expect it, and the basics of how to manage it, thanks to my mother. That was lucky for me, because I’d have been screwed if I’d had to rely on advertising or the media. The word ‘period’ was yet to appear in an ad. The TV and magazines of my youth featured a lot of mysterious blue liquid, white trousers, and copy about feeling confident and avoiding embarrassment, without ever mentioning why.

Embarrassment was the theme for my periods as a teen though. I spent many hours in classes worrying my pad might be leaking through to my school uniform skirt. It happened, too, more than once. Our pads were massive, but they didn’t have high-tech absorption or fancy wings. There’d regularly be the need to soak the knickers in cold water in the laundry.

Crazy cycles, of course, are just one manifestation of what’s going on in my body right now. But until I started researching for my book on menopause, I was, like many women, ignorant about my hormones beyond the basics. I probably knew more about testosterone than I did about oestrogen, the main female hormone. If you’d asked me a few years ago, I wouldn’t have been able to describe what oestrogen does.

Now I know oestrogen drives me. It is involved in almost every one of our bodily functions if we’re a human with ovaries; we have oestrogen receptors everywhere. Our brains, our muscles, our bones, our gut: oestrogen is there wielding an influence like a master of ceremonies. Although not a master. Master is the wrong word. I want to call oestrogen a she. She is powerful. She’s in control. She is my mistress.

As we age, oestrogen enters a natural decline. It’s a transition like puberty, but in reverse; when we come out the other side, our hormone levels are like they were before we started menstruating. (That we don’t feel as comfortable and accepting of this transition, and know so little compared to what we know about puberty, is whole other conversation.)

Oestrogen’s decline is not straightforward and gentle, as it is for men and their testosterone (worth pointing out to men who insist they have a similar experience to menopause. No. You really don’t). During perimenopause, oestrogen takes a bit of a roller-coaster ride. She goes up to levels higher than she’s ever been, and she plunges down to levels far below. And she goes everywhere inbetween.

Those ups and downs cause not only the erratic periods but also most of the other stomach-dropping symptoms we’ve come to know and hate about perimenopause. The flushes; the night sweats; the erratic moods; the rage. Not to mention all the other weird things that can happen. The list published in my book has 44 symptoms; I keep seeing more lists with more horrifying things on them on social media and I don’t doubt they’re true too. All those receptors; all those places – oestrogen is wreaking some havoc in our midlife bodies, to the point where if almost anything out of the ordinary happens to my body now; any weird pain or grumble, I think: probably perimenopause. Yes, mistress.

It’s weird not to know if I’ll have another period. Part of me wants to hold on to them for as long as possible, to feel the benefits of still having oestrogen fueling me enough to cycle. My periods are almost comforting to me now. I imagine oestrogen flowing through me, rising and falling, lubricating my joints and unscrambling my brain.

On the other hand it’s quite relaxing not menstruating. No more cramping; no more period diarrhea; no more monthly headaches. And I won’t miss the expense. I feel so ripped off that most of my menstruating life has been spent without the benefit of re-usable period products! I’ve had, I estimate, 468 periods, and spent conservatively enough money to pay for a small car on items from the “feminine hygiene” aisle, as it was called until very recently. That pisses me off.

Some women feel a real sense of grief at the end of their periods. There’s a sadness at the thought of the end of their reproductive lives; the idea of no more babies, even if they didn’t want any more. That part of our lives is over for good at menopause. We’re no longer reproductively viable. That of course, means that other thing that women are judged for: we are no longer young.

I’m OK with that, most of the time. I feel at 51 I’m hitting the height of my power (just as a man is). In my mind, I’m like one of those fabulous French women who becomes more chic and beautiful as she gets older, retaining the grace of her youth while acquiring a sexy layer of wisdom and experience. That’s how it is in my imagination.

In reality, I feel sad about the ageing sometimes. I like and enjoy my body, but I can see it changing, too, as oestrogen makes her fickle retreat, and I don’t always love it. Looking at pictures of myself from even five years ago I can see the difference. I don’t mind being older, truly. You can’t become known as someone who’s out there talking about menopause without embracing your fifties. But I don’t want to seem old.

The reason I feel that, I realise, is probably tied in to a whole mess of internalized misogyny. We’ve come a long way from the days when menopausal women were diagnosed with hysteria or mania and chucked into institutions. But still, “menopausal” is a pejorative term to many. And still, an older woman is not always – in Pākehā culture at least – as valued as an older man. Which is bullshit.

So it’s important to me that the menopause conversation now starting (which is awesome) doesn’t get too bogged down in the negative. For sure, this can be a truly crappy time for many women. We need to acknowledge that, not hide from it. And helping those women has become a big part of my kaupapa. Everyone – all ages and genders – needs to understand and support this transition better and I’m doing everything I can to make that happen.

But it’s important to also know that menopause is temporary. And once oestrogen calms down, she leaves us with some parting gifts.

When I surveyed women for the book, one of the questions I asked was about the upside of menopause. ‘No more periods’ was top of the list, something I’ve had a small inkling of. It feels free.

“I’ve found a new level of maturity, understanding how I have changed through this process; what I value, and the value I bring,” wrote one woman. “I’m excited for new beginnings and I can feel the new power,” said another.

That sounds pretty great. It makes me feel hopeful for the next season of my life. Hearing that and knowing what I now know about how this transition works, I’m not scared any more. I’m excited. I can’t wait to feel the power.

As a child in India, I longed for a bowl of my grandma's curry that would never run out and always remind me of home. In New Zealand, that wish came true.
By Perzen Patel
Guest writer
5th June, 2022

The Sunday Essay: Inside Frank Bascombe

Richard Ford's great literary creation reminds us that little though our lives may be, from within them nothing is bigger.
By James Borrowdale
Guest writer