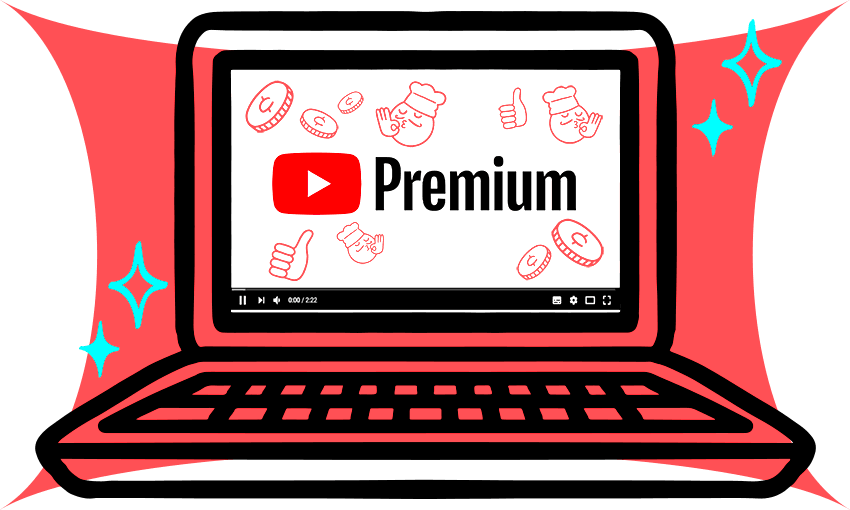 Do you pay the top dollar for YouTube Premium? Sure, but it’s bang for your buck. (Image Design: Bianca Cross)

Hear me out: YouTube Premium is the best-value streaming service

Do you pay the top dollar for YouTube Premium? Sure, but it’s bang for your buck. (Image Design: Bianca Cross)

It’s 2022 and subscriptions are piling up. I’m currently subscribed to two food boxes, around 10 Substacks, three magazines and a monthly wine service. It’s a lot, but at least with most of these I know exactly what I’m getting – if you subscribe for food, you get food; if you subscribe for wine, you get wine.

Streaming services, not so much. You might know what’s available on a streaming service when you sign up, but it’s a mystery what’s coming down the pipeline – or what’s getting ditched from the library. If you want (legal!) access to all the new TV coming out, let alone the old TV you don’t already own, you’d need subscriptions to at least 10 separate streaming services. Our new-to-streaming round-up alone includes Netflix, Neon, Amazon Prime Video, TVNZ on Demand, Apple TV+, Disney+ Acorn and Shudder, and that’s not even every one you can subscribe to in this country.

My decision to spend $15.99 a month to subscribe to YouTube Premium came after a terrifying late night experience.

I’ve fallen asleep to YouTube videos for years, finding the sound of their chatter preferable to my own inner voice. Often it’s gentle-voiced men playing video games – these videos tend to be quite long, so I’d usually fall asleep well before they finished, or before any ads even played.

That is until one night in 2019, when I woke up to an ad nine minutes into an Among Us tutorial. I sleepily clacked a few keys and skipped the ad.

When I lay back down to sleep, I wasn’t listening to the next video. No, I was listening to my inner voice, at full volume: “How many ads have you subliminally consumed in the past few years? What deep recesses of your subconscious are occupied by the rules of free-to-play games you have no intention of playing … yet?”

That morning, after I awoke to more gentle-voiced men playing video games, I clicked the “Premium” button on YouTube and entered my credit card information. Over 5,740 hours – that’s 239 days – of streamed content later, I haven’t looked back.

Removing ads from your YouTube experience is the obvious reason to pay for Premium. Whether you use the site as background noise or have channels you avidly follow, the last thing you want is a HelloFresh ad with your favourite New Zealand comedians popping up halfway through and ruining the ambience. For people with kids who love to watch hour-long videos of heavy machinery this is an especially strong selling point.

Another major benefit of Premium is that it allows you to play videos in the background on your phone, like Spotify or your preferred podcast app. You can use this feature to enjoy some of the many songs that aren’t available anywhere else, like this Spice Girls and Disturbed mash-up, or download videos to watch offline, a feature I recently used to rewatch Kate Bush live performances on a plane. Your own choices may vary.

If you want to ditch your Spotify or Apple Music subscriptions altogether, YouTube Music comes as part of the base Premium subscription and has a larger music library than either of them, with many non-official performances or remixes of songs in addition to the 70 million-odd song library shared by pretty much every major streamer. I’ve also found that the algorithm tends to be more targeted than either Spotify or Apple Music, by which I mean that unlike those platforms it has yet to recommend me any songs by a RuPaul’s Drag Race contestant.

Finally, because I am a saint awaiting canonisation, I upgraded to Premium’s family plan and gave one of my family plan slots (there are four) to a friend who has recently given birth. In a move almost certain to remove me from canonical consideration, I intend to dole out the rest of these slots slowly, to those who have earned my favour, like Olivia Colman in The Favourite. If you’re on a Premium family plan you can do the same, or just use it for your actual family, like a normal person.

There are some downsides, of course. I can’t watch the new RuPaul’s Drag Race on YouTube Premium, although I can watch the 1,000-or-so recap/rucap shows and try to glean an understanding of what happened. It should also be noted that YouTube is a major conduit of harmful misinformation and lacks the kind of quality control that other paid streaming services have. However it also doesn’t have full episodes of Glee, so maybe it all evens out.

Since subscribing to Premium, I’ve paid roughly $550 and watched (or slept peacefully through) 5,740 hours with not one single ad. At around $1 for every 10 hours watched, that’s what I call bang for my buck.