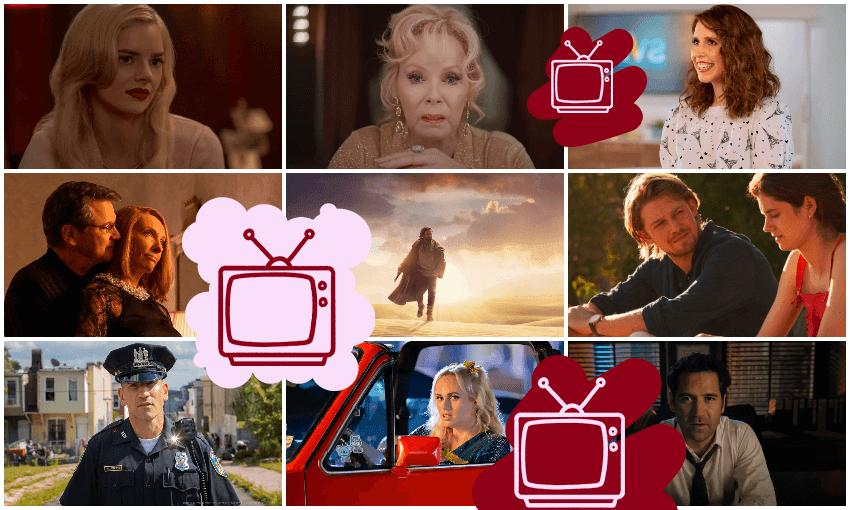 Look at these faces looking at you! They’re what you’ll be watching in May. (Image Design: Tina Tiller)

What’s new to Netflix NZ, Neon and other streaming services in May

Look at these faces looking at you! They’re what you’ll be watching in May. (Image Design: Tina Tiller)

What are you going to be watching in April? With thanks to our friends at Nando’s, we round up everything coming to streaming services this month, including Netflix, Amazon Prime, Disney+, Apple TV+, Neon and TVNZ OnDemand.

Obi-Wan Kenobi (limited series weekly on Disney+ from May 27)

If there’s one part of the expanding Star Wars universe that I’ve been most excited about, it’s this long gestating Obi-Wan Kenobi midquel, which sees Ewan McGregor reprising the role of the Jedi Master in a series set after the prequels and before the original films. Also starring Joel Edgerton and Queen’s Gambit breakout Moses Ingram, the series follows Kenobi as he watches over Luke Skywalker but finds himself embroiled in a “rollicking adventure”. Perhaps most excitingly: Hayden Christensen returns as Darth Vader. / Sam Brooks

It’s finally happened: the critically acclaimed, Emmy-winning series that was the buzz of 2021 is finally making it to our shores. Hacks stars the incredible Jean Smart (Mare of Easttown, Watchmen, a host of other amazing things) as Deborah Vance, a legendary Las Vegas comedy diva who, finding herself in need of a career revamp, hires a young TV writer, Ava (Hannah Einbinder), who has recently been fired for insensitive tweets. What’s even better is that TVNZ on Demand is getting the second season express, so you’ll be able to binge the first season and get straight onto the second. / SB

The Staircase (limited series on Neon from May 5)

Fans of true crime, it’s time to celebrate. The documentary that kickstarted an entire genre is getting the Hollywood treatment, with the pioneering 2004 doco being adapted into a starry HBO Max miniseries. The series looks to closely follow the twists and turns of the original TV documentary – available on Netflix – and follows the criminal trial of Michael Peterson, accused of murdering his wife and staging it to look like she’d fallen down the stairs. Starring Colin Firth and Toni Collette, the series will have its work cut out to match the “see it to believe it” weirdness of the original doco. Here’s hoping it can. / Stewart Sowman-Lund

Kid Sister (on TVNZ on Demand from May 26)

This new semi-autobiographical comedy follows the loveable Lulu, a young Jewish Aucklander who is navigating life in a city where more people identify as Jedi than Jewish. Lulu struggles to balance the pressures of family life with her need to find her own place in the world, and her relationship with her non-Jewish boyfriend (Paul Williams) makes things more complicated. Simone Nathan stars as Lulu, with her real-life brother Joe appearing alongside her. / Tara Ward

It’s been two long years since we saw a Sally Rooney adaptation about moody pretty people poorly expressing what they really want, and I’m so ready to see some beautiful people get messy. This series is adapted from Rooney’s first book, and stars Joe Alwyn (The Favourite, Taylor Swift’s boyfriend), Alison Oliver, Sasha Lane (The Girlfriend Experience) and Jemima Kirke (Girls) as four friends who end up in confusing, and ultimately heartbreaking relationships with each other. If you love Sally Rooney, you’ll love this. If not, pass. / SB

We Own This City (limited series on Neon from May 3)

Fans of The Wire should check out this gritty new HBO drama, inspired by the true story of corruption within the Baltimore police department. Based on a book by Baltimore Sun journalist Justin Feston, We Own This City traces how a dysfunctional police unit started organising and participating in crime, making the lives worse for the communities they were supposed to protect. Nerve wracking, infuriating and compelling, all at once. / TW

Yes, Stranger Things is still going! And for a fourth season, where each episode cost reportedly $30 million. What a time we live in. If you’re on the Stranger Things train, chances are you’ll tuning in to this one immediately, but the basic premise is teenagers in the 80s deal with supernatural, otherworldly beings and their own inner demons. But let’s be real: if that wasn’t your thing when the show debuted in 2016, it’s not gonna be now. / SB

I Love That For You (weekly on Neon from May 9)

Who hasn’t dreamed of an American comedy set in the hectic world of a home shopping channel? Vanessa Bayer stars as childhood leukaemia survivor Joanna Gold, who lands her dream job as the host of a home shopping channel. Things go badly until Joanna tells a white lie about her illness, and discovers that sometimes dreams can turn into nightmares. It might sound far-fetched, but it’s inspired by true events. SNL’s Molly Shannon and Jenifer Lewis also star. / TW

The Lincoln Lawyer (on Netflix from 13)

David E. Kelley (Boston Legal, Ally McBeal, The Practice) is back with a new drama, and guess what? It’s about lawyers. Based on the best-selling book by Michael Connolly, The Lincoln Lawyer follows a Los Angeles defense attorney forced to work out of his Lincoln car, rather than a boring office like everyone else. Yes, it was a 2011 movie starring Matthew McConaughey, and the small screen version promises plenty of Kelley’s trademark courtroom drama, compelling characters and fancy lawyer banter. / TW

Senior Year (on Netflix from May 13)

If you told me that the Rebel Wilson industrial complex would still be in full force in 2022, I’d say “good for her!” This is the kind of premise that seems tailor-made for Wilson’s screwball gifts: A high-school cheerleader falls into a coma before her prom. Twenty years later she awakens and wants to return to high school to reclaim her status and become prom queen. I can only imagine hijinks will ensue. / SB

Can we officially call 2022 the return of the proper rom-com? With The Lost City and now this, we can only hope so. By rom-com I mean a proper romantic comedy, with the three Cs: chemistry, charisma and actual comedy! The Valet, a remake of a 2006 French film, stars Samara Weaving, a highlight of last year’s middling Nine Perfect Strangers and Eugenio Derbez, from Best Picture winner Coda, and my hopes might be a little bit too high, but I’ll take a rom-com as it’s served. On Disney+. / SB

This post is made possible by our friends at Nando’s.

Octonauts: Above and Beyond: Season 2

Hold Your Breath: The Ice Dive

The Sound of Magic

Along for the Ride

The Life and Movies of Ersan Kuneri

Vampire in the Garden

Love on the Spectrum US

The G Word with Adam Conover

The Photographer: Murder in Pinamar

The Boss Baby: Back in the Crib

Wrong Side of The Tracks

My Little Pony: Make Your Mark

The Eyes of Tammy Faye

The Legend of Tarzan

We Own This City

I Love That For You

Get Him to the Greek

Why Didn’t They Ask Evans?

Tony Hawk: Until the Wheels Fall Off

The Conjuring 3: The Devil Made Me Do It

Made for Love: Season 2

Undercurrent: The Disappearance of Kim Wall

Never Back Down: Revolt

Ruby and the Well

Coming of Age in Cherry Grove

From the Vault: Kiwi Music Flashbacks

Vanished: Searching for my Sister

The Lover in the Attic: A True Story

Deadly Secrets by the Lake

The Thief, His Wife and The Canoe

Inside North Korea: The Cyber State

Inside North Korea; The Next Leader

The Wonderful Winter of Mickey Mouse

The Godfather Coda: The Death of Michael Corleone

The Thing About Pam

Love in the Sun

Just The Way You Are

My Life Is Murder: Season 2

We Summon the Darkness

The Taking of Deborah Logan