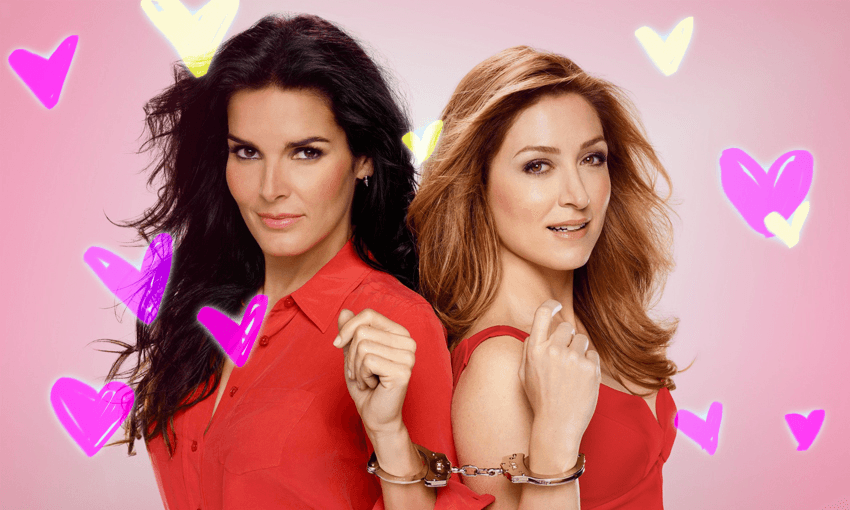 Rizzoli & Isles – together forever, but not in the way fans wanted.

Let the lady cops be in love: The queerbaiting weirdness of Rizzoli and Isles

Rizzoli & Isles – together forever, but not in the way fans wanted.

Rizzoli & Isles was gayer than you thought it was – or at least, it should’ve been. Sam Rutledge reflects on the frustrating experience of being a queer fan of the ridiculously named cop procedural.

They say it’s harder to write about something you love than something you hate, so it’s a good thing I hate Rizzoli & Isles a lot more than I love it.

Rizzoli & Isles – which once got jokingly misspelled among my friends as “Risotto Island” and never recovered – was a crime procedural much like every other crime procedural. During the course of an episode, someone did a crime, and then one way or another the crime would be solved. The crimes on Rizzoli & Isles were as awful as most crimes on TV: murder, sexual murder, angry murder, sad murder, passionate murder. We got the full spectrum of murder here, folks! The only difference was, they were crimes solved by not one, but two whole women.

The show ran for seven seasons, which is nothing in crime procedural years. Where’s our CSI-style 15 seasons and a spinoff, TNT? Rizzoli & Isles had all the same morbid quips and one-liners, as well as a lot of extremely questionable police procedures. Plus, there was always at least one contaminated crime scene per-ep due to no one tying up their beautiful long manes of goddamn hair!

And look, two female leads might not seem like a big deal to you, but in the wild west of 2010, it was a huge deal. That was pretty much all it took for me to start watching the show, honestly. I have very little interest in seeing men do anything unless they are Nikolaj Coster-Waldau riding a horse, so it was right up my alley.

Jane Rizzoli is the first female cop in her Boston homicide unit and billed as “tough”, “tomboyish”, “brash” and all those words that just mean “butch” but no one wants to say it. With Angie Harmon’s voice serving as a character trait all on its own, you can imagine the picture she presents fits… well, a certain stereotype. Angie Harmon could get it since the first Agent Cody Banks movie, but when you let her play a character she was born to be (a closeted gay cop), she is truly great to watch.

On the other end of the successful white lady spectrum is Maura Isles, the chief medical examiner and someone famously lacking in social skills. She gets referred to as ‘Queen of the Dead’ which honestly sounds metal to me, but I guess people use it in a mean way and Maura gets upset about it. In contrast to Jane, Maura is very feminine, and since she’s played by NCIS’s thoroughly charismatic Sasha Alexander (who deserves an Emmy), she provides the sunny, occasionally-clueless foil to Jane’s street-smart prickliness.

Chemistry is something that TV people like to bang on about at length, and the shorthand of it is it just means the two people who are saying lines at each other want to bone. It doesn’t matter what gender they are, that’s what it means. The two leads on Rizzoli & Isles wanted to bone, and their show would’ve been so much better if they’d just let them do that.

Instead, we got seven seasons of contrived boyfriends who had no chemistry: Dean, Casey, Giovanni, Ian, Joey? All boring. Donnie Wahlberg didn’t even have a Boston accent when he guest starred, so what a waste of time for us all.

Here’s what would have been great: Jane Rizzoli fighting back against the stereotype thrust on her by embracing it. Despite what straight people seem to believe, it isn’t actually interesting or subversive that the tomboy character isn’t really gay. It’s boring, and also demoralizing. It’s like you’re saying “I know she looks gay and acts gay, and everyone thinks she’s gay, but don’t worry – she isn’t really”.

You shouldn’t be patting yourself on the back about a portrayal like that, or wondering why people always have to “turn things gay”. Instead, you should be thinking about why it’s so important to you that this person has to be straight.

I mean look, I think it’s beautiful and amazing and special that this show put so much effort into its female friendship. Too many shows, especially crime procedurals, don’t seem to understand how women interact with each other in the wild. Castle, for example, had a similar friendship between Kate Beckett and medical examiner Lanie that felt forced half the time and forgotten about for the rest of it. I never believed in it, whereas it did feel like friendship was definitely the deepest heart of Rizzoli & Isles.

However, nothing would have taken away from that friendship if they had been girlfriends as well.

If you’ve been on the internet for a while, you’ve probably heard of queerbaiting. The term has lost someof its original meaning in the ever-evolving hell that is Online (it doesn’t mean “the queer woman is sleeping with women, just not the one you want her to”, Killing Eve fans!), but in general, it means a show plays up any sort of homoerotic subtext – usually picked up on by the – without any intention of making it actual canon. Put simply, it’s a dick move done for ratings and queer viewers have been putting up with it since Xena: Warrior Princess.

Rizzoli & Isles, though, is really, really guilty of pulling this move. In fact, going back to watch the show again, there’s no real way to enjoy it because I know there’s no payoff coming. Rather than catching up to a moment where everything culminates, I’ve just sat and watched an extremely gay show where absolutely nothing gay happens for an entire week.

The show, right out of the gate, is… questionable in its heterosexuality. Jane greets Maura at a crime scene by asking her to relocate her nose – the nose she injured rough-housing with her brother during a basketball game (gay). Maura does, tenderly, and then they gently bicker for the next 40 odd minutes (also gay).

It doesn’t get any less gay after that (I checked) and before you accuse me of being delusional, maybe check out the over-8,000 fanfics on fanfiction.net and get back to me. The fanbase was large and prolific and if you look up any Rizzoli & Isles archive they’re still writing fanfictions like ‘A Crime of Passion’ and ‘Calamity Jane Meet Dr Isles, Medicine Woman’ (it’s exactly what you think it is) about the show to this day. That’s longevity! And also the lesbian way.

The thing is, even with its one significant difference, Rizzoli & Isles is still like every other crime show. It’s the same because it has two leads with sexual chemistry – something that doesn’t just happen – and if one of them had been a man there’s no question that they would have gone to bone town. It’s hard to love a show that was so dogged in its attempts to explain why Jane and Maura couldn’t be together when they basically already were together. You can’t pretend to be a couple more than once and expect people to not get ideas!

We’re slowly, blessedly becoming less starved for queer representation on television. But when I was watching this show eight-odd years ago, things were a bit bleaker and Rizzoli & Isles was a bright spark in the gloom of constant heterosexuality. Listen, I’m a pretty simple gal. I’ll watch anything that anyone else is watching – I watched The X-Files, I watched Game of Thrones and The Good Place, and I invested in all the same straight relationships everyone else did. I don’t need everyone to be gay. I’d just hoped, one time, that there could be a mainstream queer couple that everyone else could get into too.

Rizzoli and Isles is currently available to watch on NEON, Sky Go and Sky On demand