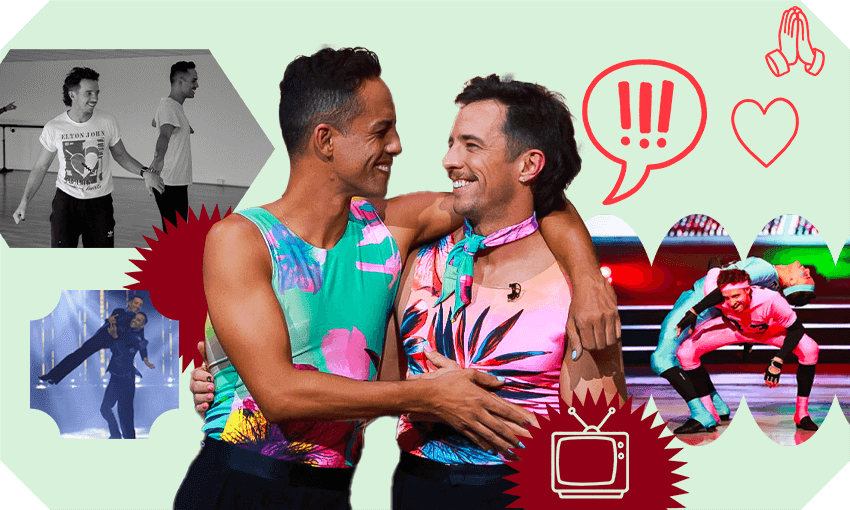 To Jonny from Eli, with all my love and eternal thanks

Our time together on Dancing With the Stars was short but I know our friendship will last a lifetime.

There was a moment during our samba dress rehearsal when Brodie Kane, Kerre Woodham, David Letele and I looked at each other in our Barbie-and-Ken-at-Miami-Beach looks, burst out laughing, and said “none of us can go home in these outfits”. Unfortunately, one of us did. Unfortunately for me, I was that someone.

I went into the elimination feeling confident. My dance partner Jonny and I were full steam ahead with our plans for the next few weeks. We had mapped out all of our rehearsals and every time there was a gap in the shooting day we were hard at work on moves for next week’s dance (a tango to Beyoncé’s ‘Sweet Dreams’, in devil make-up and black lace… may it rest in peace!) We were third on the leader board and we’d been first the week before, so to go home the votes would have to REALLY not be in our favour. Unfortunately, they REALLY weren’t in our favour.

I was devastated. It wasn’t even the contest that I was gutted about; I had just loved learning to dance. To work on a new skill, as a fully grown adult, every day of the week, four or five hours a day, was an opportunity I have never had before and I know I’ll probably never get again. I looked forward to training every day and I came home energised from it. I would try and teach my boyfriend the moves I learnt, and every chance I had I’d be practising them, whether it was under the desk at work or in the line at the supermarket. I was obsessed, to the point where I am sure it was annoying to be around.

But I don’t think I would have loved the dancing so much if I hadn’t had the greatest teacher in the game. When I look back at this absolutely wild period in my life I know the thing I will always be most grateful for is working with the extraordinary Jonny Williams. I didn’t get a glitter-ball trophy, but I did get a new best friend which, as someone in my 30s, was not something I saw coming.

And so, Jonny. From the bottom of my heart, thank you so much.

I am not naturally good at dancing. In my little experience with it I have always been a slow learner who cannot switch his brain off. I don’t know how you did it, but in just a few weeks you got me to a level I never thought I could reach. You layered the techniques so that every new step seemed achievable, and you were patient with anything I found difficult. When I was exhausted from breakfast radio you found ways to keep working with what little energy I did have. You have such eternal calmness about you that on performance days any stress I had about what we had to achieve would fade away the minute we met up.

The teaching was good, but the friendship is so much more. The more we worked together the more you honed in on what sort of comedy I love to make, to the point where half the stuff we were putting online was your idea. You made me laugh every single day. I got to learn not just about the world of dance, but about UFC and Fortnite and which gaming laptops are the best. I got to see what a fantastic dad you are every time your kids came to visit. I got to see the incredible support you and your wife Kristie give each other through the extremely stressful process of competing against each other. I got to see the admiration that all of your students have for you every day when they came in for their lessons.

We didn’t even talk about the word “ally” until we were making a bloody TikTok in the third week of training, but you had been showing allyship in ways I could not believe since day one. It was in the way you and Kristie made sure to talk about “leader” and “follower” steps in every group rehearsal, never once calling them “girl” or “boy’ steps and correcting other people when they did. It was in the way you never once made a joke about having to get changed in the same room as me, you never made anything awkward even as we learnt the most intimate moves. It was in the routines you choreographed, which always put the fact that we were two men at the forefront, and which never had one of us “being the boy” as so many people were obsessed with asking us about. It was in the way you said “I love you bro”, without any hint of hesitation, on live TV in the midst of all that happened on Monday. But most of all it was the way that all of this came naturally, that you never once were trying to put anything on or do the “right thing”.

I could tell it all came from a genuine place, and that you had no idea how generous you were being, by how surprised you were by the response we received. After our first performance my inbox filled up with messages from people thanking us for what we had done. Teenagers who were inspired to come out by what they saw, parents with kids as young as four describing the impact we had on their whānau, and queer people who have waited years to see this on our TV screens. I can’t thank you enough because, as important as it is to see queer people being their authentic selves and living their best lives on screen, I think it was seeing a straight man be so warm, open and kind to his gay mate that has struck a chord with so many.

Dancing With the Stars has always been a talking point in the way it has brought discussions about masculinity to the forefront. Almost every year it’s been on we’ve seen the most masculine sportsmen win fans by showing their vulnerable side, and taking on a more gentle type of athleticism. I think those stories have been amazing, but I’m gutted our different take on masculinity did not receive the same response. To go home after a dance that came from the opposite angle, where I got to play tough sportsman and we were able to subvert male stereotypes… that stung. But it was so much fun. I have been on my own journey of unpacking all sorts of internalised homophobia from the last 30 years, and I probably only recently got to a place where I could let myself be excited about wearing pink and painting my nails. But you, you were happy to do all of it right away. I’m so grateful. Our looks were iconic.

The pressure cooker that is Dancing With the Stars is completely unique, and I know we won’t be seeing each other as much now; we’ll no longer talk every day. But I am so grateful to have you and your family in my life. Maybe we will get dance again soon. Or maybe you can just finally teach me how to play Fortnite.

I chose OutLine as my charity for the beautiful work they do providing support to the rainbow community. My time on DWTS is over but their work continues. We’ve all been so overwhelmed by the generosity of viewers since Monday, and if you’d still like to help, you can donate to OutLine here.