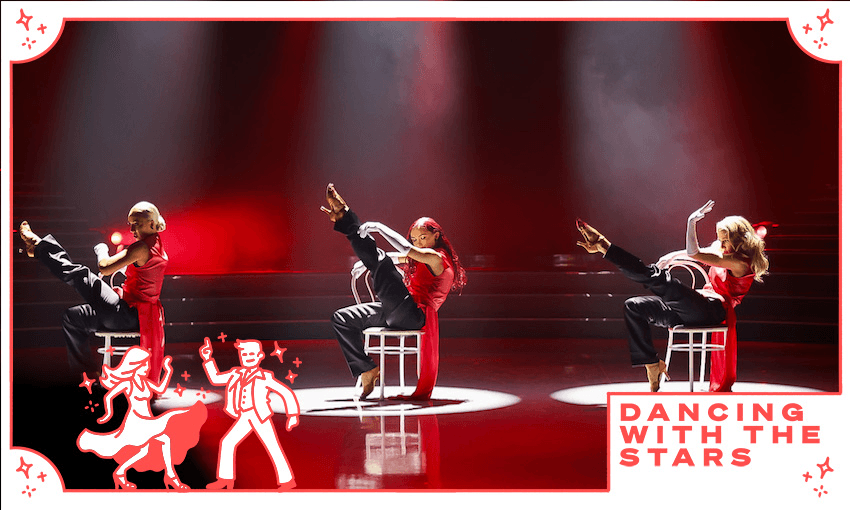 Dancing with the Stars, week two: Is this show broken?

This week’s theme? Top 40. But really, what week two of Dancing with the Stars NZ gave us was pure shock and awe, writes Sam Brooks.

Anyway, moving on. This week’s theme was top 40 – about as loose as a theme can get. So how did the dancers do?

What the actual fuck? Is there something broken at Dancing with the Stars? Eli was clearly one of the best dancers on the show, and had so much more to give. His scores should have secured him a spot further on, and clearly shows a flaw in the way that the votes are balanced, honestly. We’ll always have that first week, that genuinely made me emotional. But this is wild. Wild! What’s wrong with you, people who didn’t vote for Eli?

Also, this dance was great! I wanted to see more. Once more: boo.

Fine! Alex Vaz remains as tall as he was last week, and is a slightly more graceful dancer than I’d expect. Did you know that ‘Heat Waves’ by Glass Animals currently holds the record for the longest stay at number 1 on the US charts at 59 weeks? Now you do. I have more thoughts about that than this dance, but this was quite nice, I suppose!

What is this, Dancing with the Stars or Throwing Women to the Stars? Am I right, (thrown) ladies?

Bless Eric Murray, who seems like a nice guy, but I will eat my various hats if he had ever heard the song ‘Intoxicated’ by Martin Solveig and GTA before starting rehearsals for this dance. It also feels unfair to make anybody dance a cha-cha to it, because ‘Intoxicated’ is less a song and more what you’d hear if you threw a fax machine down the stairs.

Look, Dave loves doing this and he seems like the nicest, best person. That’s what gets you to the middle of the pack.

This seems as good a place as any to brag that I was on the Lizzo train about five years before everybody else was, and I have seen her live twice! Also to point out that while Lizzo’s ‘Good as Hell’ is indeed good as hell, it’s maybe not a great fit for a foxtrot.

You know what I think of when I think of Kerre Woodham? Why, the Drax Project of course! Anyway, I will be thinking of the phrase “I thought throwing nana to the floor was a bang!” for quite some time. Also this was great! She seemed way more comfortable this week than last week, when she apparently had stage fright (you couldn’t tell), and if Kerre Woodham is comfortable, then I am happy. Just how it works.

Also, Kerre, you do not need to take advice from me but I would use the above photo for all future headshots.

Oh yeah, Jazz Thornton is just a very good dancer – this was as good a quickstep as I’ve seen on this show, probably. And if she’s not a very good dancer, then she’s very good at pretending, which is… definitely good enough for week two of this competition. My only note is that she’s serving TikTok face, and I presume that Warner Brothers is not skint enough to be filming this on iPhones, and she needs to be serving like, Panasonic face. Or at least MacBook face, as that’s what I’m watching this show on.

Look, my barometer for a tango is that scene in Mr and Mrs Smith where Angelina Jolie throws a knife mid-tango, and this came pretty close to that.

This was great! Like Lance, this is definitely the best dance I’ve seen on the show so far. High drama, high difficulty (I think), and like, just a good minute and a bit of telly. Sometimes it’s simple! I feel weird calling it “hot” because this will live on the internet forever, but it was hot!

Dancing with the Stars NZ airs on Sunday at 7pm and Monday at 7:30pm on Three.