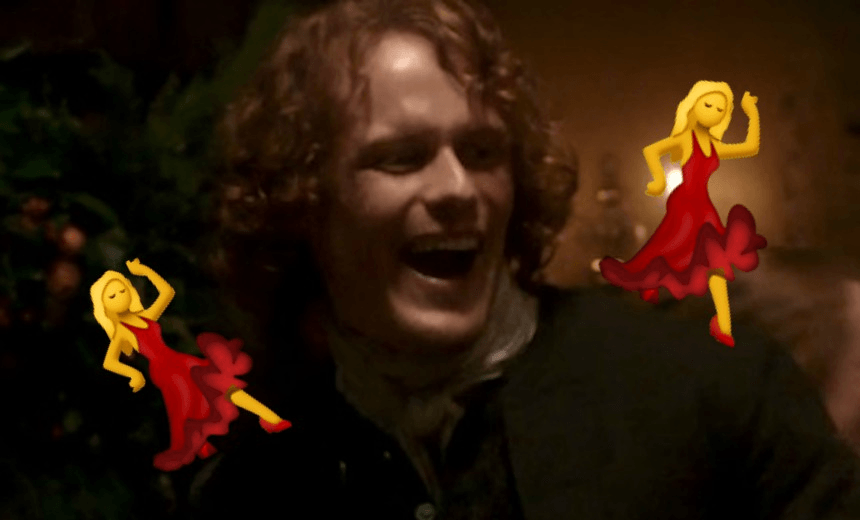 Outlander recap: Jamie Fraser is the Lord of the Dance

You know you’re in for a treat when Outlander begins with a close-up of a pie. Feast your eyes, my pretties, because that pie was a beautiful piece of symbolism about the endless pleasures bursting out of ‘The First Wife’: a kidnapping, a shooting, life-saving surgery, stolen treasure, drunken dancing, a secret wife, Queen Jenny Murray and best of all, a Jamie Fraser Good Hair Day.

I’m as exhausted as Jamie after he spent Hogmanay moonwalking through the kitchen. Have mercy, for I’ve binged too much Outlander goodness and I’m not wearing my stretchy fat pants. Will I survive? It’s touch and go tbh.

Claire and Jamie’s return to Lallybroch had the entire Murray clan overcome with joy. Just jokes. Ian’s brow was more furrowed than his turnip fields and Jenny was so annoyed she pulled the oldest trick in the book: bring out ye brother’s secret wife. It seems Jamie got sick of standing in the corner at family dances and married old mate Laoghaire, the very same Laoghaire who put weeds under Claire’s pillow and tried to have her burned as a witch.

Listen, we all do weird shit when we’re hungry. Laoghaire was now mother to two daughters who called Jamie “Daddy”, and it’s fair to say she took the news of Claire’s return well.

Laoghaire was determined to stake her claim on the ginger man-mountain that is Jamie Fraser. But who climbed him first? Which wife gets to slide down the Fraser cliff-face and land in the soft powder of his heart for the rest of their blessed days? In the eyes of legal legend Ned Gowan, it was fairly straightforward: she who throws the first c-bomb will be left sniffing her ex-husband’s wet washing for all eternity.

Seems fair, and whenever I feel sad about Laoghaire’s sudden vulnerability as an unmarried mother in 18th century patriarchal Scotland, I cheer myself up by looking at this face. It’s Jamie Fraser, aka an all dancing, all smiling ray of flipping sunshine. Nobody puts this baby in the corner.

The rhythm is going to get Jamie, if Jenny doesn’t get him first. Her bullshit detector was on high alert, and she pulled Claire’s story apart like it was the stag carcass from episode two. Why didn’t Claire send a letter from the Colonies? Why didn’t she look for Jamie after Culloden? Hadn’t she heard about the dire Dunbonnet cave-hair situation?

Ah, Jenny. It doesn’t matter how many jugs of water you throw over your rutting brother and his weirdo wife, some things can never be explained.

In other news, the Lallybroch potato status is official: superb.

Alas, non-wife Laoghaire wasn’t about to go quietly into the night. Furious at no longer being able to sign her name ‘Wife of Ardsmuir’s Most Popular Prisoner 1753-55’, Laoghaire demanded a shitload of alimony from Jamie. Let’s count our lucky stars that our hero knew just where to score some loot, even it if did involve a secret treasure chest hidden in a ramshackle castle on a remote island.

Sweet scallop potatoes, what are the chances the island would be invaded by pirates at the exact moment Young Ian found the treasure?

Jamie’s telescope is a bit crap, or he’d have seen this entire shitstorm coming since 1743. While Young Ian sails to Hades with Johnny Depp, let’s open our own treasure chest of top ten moments from ‘The First Wife’.

This is nothing that can’t be sorted out with a quick jig in the kitchen and a couple of delicious Hogmanay figs, am I right ladies?

Let’s hope all the bad wigs went down in flames with the print shop.

FOR THE LOVE OF GOD, DON’T AIM IT AT THE HAIR

6) Jamie climbs up a castle wall

Why can’t he just walk round the side? There’s no doors on that thing.

7) Jamie announces “there are other red-headed men in Scotland, Claire”

THERE CAN ONLY BE ONE

8) Claire drops the shoulder on Laoghaire

“And that’s for sniffing his laundry in season two.”

9) Ned Gowan’s return is all my dreams come true

10) Young Ian is kidnapped by evil pirates, because Outlander

Jenny is going to LOSE HER SHIT.

Click below to watch Outlander season three, available express and exclusively on Lightbox: