The homegrown rugby drama explores the pressures exerted on our most talented high school players – and on young men in general, writes Alice Soper.

Rugby was a foundational part of my life and yet, in many ways, the drama series Head High is foreign to me. Who knew there could be this much attention, money and drama surrounding a high school sport? I grew up in central Wellington and was an outlier, a girl, who played everything but the prescribed netball, at a school not overly fussed about athleticism. So to me, elements of the show – like coaching appearing to be a full time job and not a volunteer gig for one of your enthusiastic teachers, or principals so invested in final scores that they are a constant presence on the sidelines, scheming their opponent’s downfall – can seem far-fetched.

But given that the commodification of school sport is a live issue in this country, the world of player poaching, win-at-all-costs ambition and private-school elitism offers fertile ground for a series to explore family dynamics, class and the challenges of coming of age under the spotlight.

Season one featured all the greatest hits of TV drama; death, drugs, teen pregnancy, sexual and emotional abuse. The Roberts-O’Kane whānau went through the wringer. A well balanced and charismatic cast carried the emotional weight of these storylines with authenticity and the writing never crossed over into the territory of after-school specials. 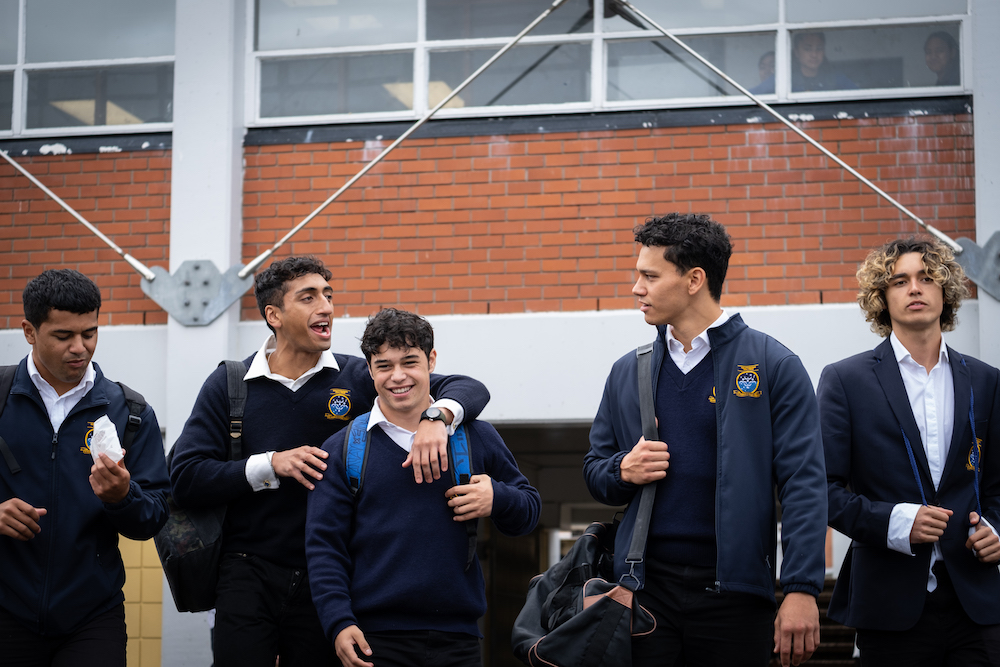 The return of Head High tonight sees the kick off of a new season, in both senses of the word. Rugby is still the obsession, the only thing the men in the show seem to think or talk about. It’s that lack of balance that rings worryingly true to the All Black production line we set our young men on.

Think about who you were at 16 years old, about all the ways you weren’t yet fully formed as a person. Now imagine that version of yourself committing all aspects of your life to the pursuit of one dream. Chasing it in an environment that sends you conflicting messages on how to be a good person. That punishes severely anyone who steps out of line with convention or questions tradition. Imagine not being able to trust which adults around you were guiding you, and which ones were exploiting your passion for their own gain. With those parameters, it’s a wonder anyone makes it through and it’s no surprise we are seeing a decline in participation in high school boys rugby.

It’s the way this reality provides the pain points for our characters to work through which makes Head High intriguing. Head High holds a mirror up to us, the rugby-loving general public, to reflect on just what our national game has become. At its best, rugby teaches us lessons on the field that make us better people off it. The two young men at the centre of this story, Mana and Tai, are being shaped by this sport. And in season two, just as in Head High’s first season and the wider debate around the future of high school rugby, these boys are torn between what’s morally right and what gets you ahead. The contrasting style of the coaches at Southdown and St Issac’s reinforce that dichotomy. While in the first season we saw resources versus resolve, the lines begin to blur this season as coach with a heart of gold Vince O’Kane is buddied up with pushy parent, Mitch Belsham, played by Robbie Magasiva. By the end of episode two, Mitch has already given Vince a groundsman, new van and camera equipment, and spoken about covering his coaching certification fees. As Mitch buys favour while whispering in Vince’s ear about the need to be more ruthless, you know this friendship will come at a price.

Meanwhile, John White returns to coach alongside Jesse Roberts and both of these men continue to display problematic behaviour towards women. While White’s ongoing affair with a student is an obvious example, Jesse’s influence on his boys, particularly Mana, is more insidious. Jesse takes Mana out on the anniversary of his best friend’s death, telling him it’s better than being a “sad guy”. He encourages Mana to lie about himself to try and pick up girls, demonstrating how Jesse sees women as objects to be used to make yourself feel better. Harmless consensual fun the boys would no doubt argue – but tell that to Shardae, who is left waiting for Mana.

It’s through his relationship with Shardae that we get a window into the pressure Mana feels to conform to the expectations of manhood. He refuses to label their relationship despite their clear connection, because Shardae is not of the right status to be the girlfriend of a rugby captain. Mana talks frequently about his need to not be tied down, despite continuing to lean on Shardae for emotional support. It remains to be seen just how much of himself Mana will allow to be subsumed under other people’s expectations of him. While rugby is at Head High’s core, this is still a show about whānau and relationships. As a pākehā, I’m not going to be able to speak to the accuracy of its portrayal but I can say that it is awesome to see a range of diverse talent on screen and to hear te reo incorporated into dialogue without feeling clunky. Subplots like the sidelining of younger sister Aria’s sporting ambition will feel familiar to anyone who’s ever played second fiddle to an over-achieving sibling. And then of course there is the age-old tension of partners caught up in raising a family and forgetting to nurture the relationship at its foundation.

So would I recommend Head High? It feels like a show I would have watched growing up with my parents and enjoyed. My mum would have hidden her eyes at the violent bits and enjoyed the dissection of class issues. My stepdad would have gotten into the exploration of the impact of different male role models. I would have been drawn to the rugby and stayed for the teen romances. Across Aotearoa, I expect there are many other whānau who will feel the same.