In the first 10 minutes of 1966’s Incubus, a passing monk sucks an egg and grips a frog. We will never see him again. Director Leslie Stevens made an entire film in Esperanto, and that is the least bizarre part of it.

Incubus is filmed entirely in the world’s most popular constructed language – allegedly two million people speak it, and two thousand as a first language. I have met none of them. When Polish ophthalmologist Ludwik Zamenhof created Esperanto in 1887, his goal was to foster world peace. It’s meant to be an auxiliary language, bringing cultures and people together by creating a common thread in a world divided by our differences. Its vocabulary comes from Latin and Germanic languages, and its grammar is Slavic.

Back in 1895, Zamenhof described the origin of his idea: “In Białystok the inhabitants were divided into four distinct elements: Russians, Poles, Germans and Jews; each of these spoke their own language and looked on all the others as enemies.”

If language was part of the problem, it could be part of the solution. Over the next half century it grew in popularity.

Ho Chi Minh spoke it. So did J.R.R. Tolkein and Pope John Paul II. Today George Soros keeps the tongue alive; it feels like its heyday has passed, but what it represents lives on. The language features in Gattaca, Captain Fantastic, and Red Dwarf – when it appears in recent media, it’s to symbolise spiritual or technological advance. Esperanto means “one who hopes”, and I hoped to learn it on Duolingo. I’ve never heard it spoken by a real person. The film Incubus was meant to teach me, like Asterix taught me French. But, like Asterix only taught me how to cuss out Romans and order wild boar, Incubus only taught me unholy demands.

Well, mi ne havas elekton spekti ĉi filmon. How else am I supposed to learn “la lingvo internacia”? The only Meetup group I could find is a two-person strong virtual gaming session based in Melbourne. Not for me, thank you! I will learn via a William Shatner movie. He taught me I could be a friend and even a lover to alien species; he can teach me to speak Esperanto. Shatner cannot actually speak it; he just read a script. Stevens couldn’t speak it, either. He directly translated an English script into Esperanto to lend his horror movie an “eerie” atmosphere.

Shatner plays a soldier, Marco, who has come to the island town of Nomen Tuum to heal his weary bones. Allyson Ames – who was married to Stevens at the time – plays Kia, a succubus determined to steal Marco’s soul. In the battle between God and Satan, love is Marco’s best weapon. “Ĉu vi desiras min?” a handsome man asks Kia early on in the film. No, she desiras to stomp his face into the sand until he drowns in 30cm of ocean. She collects souls and ex-boyfriends, and intensely wholesome Marco is the ultimate prize: his noble soul is worth a hundred lesser ones. Standing in her way is Marco’s sister Arndis, who stared into an eclipse too sensually and went day-blind, and Kia’s boss, the succubus supreme, who thinks she’s taking on too much.

The gender politics of Incubus is pretty progressive in that women are really centre stage; but on the other hand, they’re also demons from Hell incapable of love. Or, in Arndis’ case, hapless victims who look at the sun and sleep slumped against door frames. It’s probably the best pro-religion film I’ve seen, but these are not the best performances.

I saw Shatner live in “concert” a few years ago, and I don’t remember any of it. His cadence is hypnotic. He speaks like God would, honeyed and gentle and beyond mortal comprehension. I’ve never heard another human speak Esperanto, but I’m sure he’s not pronouncing it correctly. It doesn’t matter, he’s got charisma.

Again, I have never spoken a word of this language to another person, but even so I don’t think Stevens has translated the lines correctly. It really feels like he’s guessed a lot of the vocab. Kia says “vengo mi”, which sounds like “avenge me” in English with an intense, pseudo-European accent. I get it, that’s how I used to get through French oral exams. “Bonjour, hwherre iss mon jackette favoureet.” Unfortunately for Stevens, “venĝu” means “avenge”. “Vengo” means “I’m coming”.

It feels good to know the difference. I’m much better at Esperanto than French. Thank you, Incubus, for teaching me this. I also feel more closely aligned with the Esperantist values now that I’ve seen a giant goat wrestle Allyson Ames. If we can all unite as a species against poverty and war, like a human and a succubus can unite against Satan, there is hope.

Incubus was not a popular film. As a low budget, black and white religious horror filmed in a niche tongue, it only achieved distribution in France. It’s said a curse was placed on the actors involved in the film: two died soon after filming, one’s daughter was kidnapped and murdered, and Stevens and Ames divorced. Shatner appears to have sucked the good fortune from every other cast member; he was the real incubus all along. 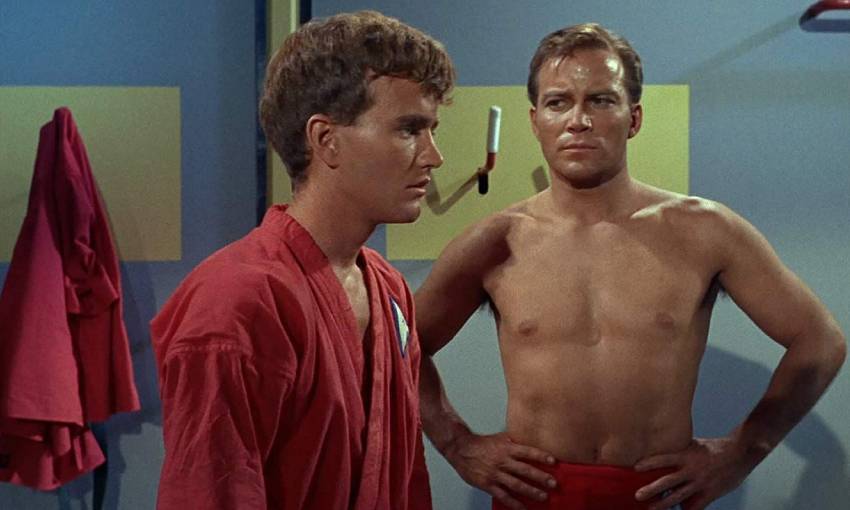 Shatner’s vehicle to superstardom, Star Trek, premiered the month before Incubus did.

The curse’s origins are detailed in Shatner’s autobiography, Shatner Rules, where he describes a rock being thrown through the window of his Star Trek makeup trailer. He did a tuck and roll before picking up the rock, to which Esperantists had attached a threatening note.

“The note went on to explain that the Esperantists were angry they weren’t consulted during the course of the film, and ‘ticked off’ they hadn’t been invited to the premiere. Also, several autograph requests made to my office had gone unanswered. Either way, they decided to curse Incubus, and anyone who laid eyes on the film.

“I took it upon myself to destroy every copy of Incubus I could find.”

A fire was thought to have claimed the original footage of the film until 1996, when a copy was found in a Cinémathèque Française collection. Shatner missed it, I have viewed it, and the curse continues on. Maybe the language will, too. Mi esperas – mi ne havas elekton.