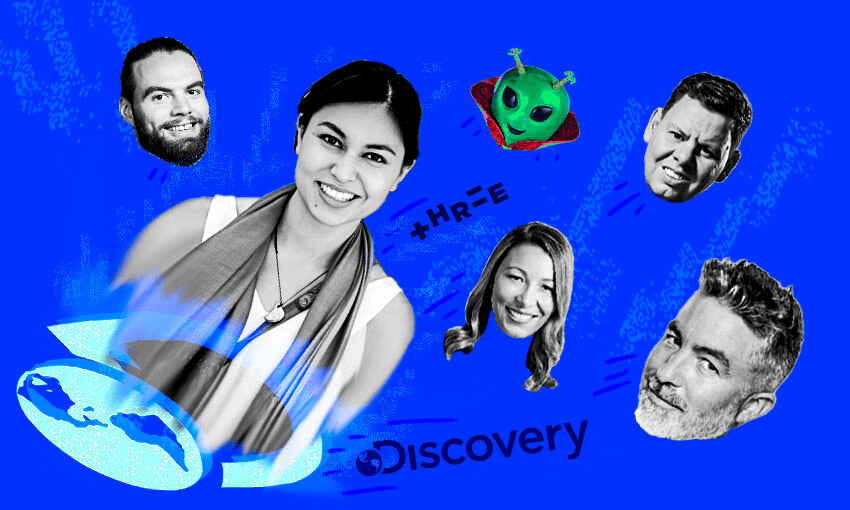 New Zealand’s viewing future, according to Discovery, has been delivered (and yes, it involves everyone’s favourite food bagger).

Media’s future, according to Succession’s resident bad boy Kendall Roy, relies on becoming “omni-national”. Discovery appears to have been bingeing on the latest season of everyone’s favourite arsehole media tycoons, because today’s 2022 content announcement screams more, more, more – and then some.

“Three’s most exciting programming slate ever,” screams the press release sent to media this morning, and, if you like news, lifestyle content and homegrown reality television, it’s not wrong. Coming next year, Discovery’s cup will overfloweth with more local content than ever before – a “70% increase”, according to the network’s new owners.

Whether that content is any good is where the debate lies. That press release makes heavy mention of reality shows: MasterChef NZ is making a comeback after six years off-air, while The Masked Singer NZ, Dancing with the Stars NZ, Heartbreak Island and The Block NZ also return for new seasons.

That’s not all. The network will launch two new channels – Gusto and Rush – early next next year, taking Discovery’s New Zealand channel tally to five, alongside Three, Bravo and HGTV. What’s on those new channels? More reality TV, much of it imported.

But wait, there’s more! A swathe of new reality shows have been unveiled: My Town Makeover, Sort Your Life Out, Tracked and Nadia’s Farm, which sees everyone’s favourite food bagger Nadia Lim show off her Instagrammable life living on a rural farm. They join the return of Match Fit, Patrick Gower’s On series, David Lomas Investigates and 7 Days, along with an all-new 8pm news show. There is no mention whatsoever about locally scripted comedy and drama.

“The transition to Discovery ANZ is complete,” Glen Kyne, Discovery’s senior vice president and general manager ANZ, said today. “Content remains at the heart of what we do and it’s exciting to be part of a global creator that itself is growing exponentially around the world.”

Kendall Roy, who once declared, “Detoxify our brand and we can go supersonic,” couldn’t have said it better himself.

The devil, though, is in the details, so let’s pick some of Discovery’s decisions apart…

They sound like Pixar movie characters. They’re not. Coming in March, Discovery will launch Gusto and Rush, two new channels each with their own identity. Gusto replaces Choice TV and promises to appeal to viewers with an “enthusiasm for life”. That means shows like Great Southern Truckers, a New Zealand production, as well as Changing Rooms UK, Big Family Farm and Finding Alice are on their way. Haven’t heard of them? Neither.

Rush, on the other hand, is for viewers after “big, bold entertainment” and “action and adventure”. That’s where shows like Wheeler Dealers, Man vs Wild, Street Outlaws and Treehouse Masters will screen. Who launches new free-to-air channels in a market increasingly being dominated by streaming services? Discovery does! Is this so crazy it might just work? Mmm, dunno. Time will tell. Gusto and Rush launch in March.

This seems a sure bet. If there’s one thing New Zealand loves, it’s Nadia bloody Lim. The celebrity chef turned her Masterchef NZ win into an uber-successful business, and her face is now everywhere thanks to My Food Bag. The show, Nadia’s Farm, will “take audiences inside her rural life”. In other words, it’s Instagram, but on TV. Expect plenty of product tie-ins, foraged flowers and rustic recipes cooked in Le Creuset bakeware over open fires.

How much reality can you handle?

Gosh, I don’t know, but Discovery seems set to test the limits in 2022. All kinds of new reality content is coming: My Town Makeover offers extreme makeovers to the most run-down New Zealand towns (hello, Huntly?), while Sort Your Life Out offers extreme Marie Kondo-ing. Tracked sounds like the pick of the bunch: teams of two race across New Zealand to reach evacuation zones while being traced by elite trackers. In other words, it’s The Amazing Race meets Hunt For the Wilderpeople. Oh, and for all you Block-heads out there, The Block: Redemption is bringing back old faves from previous seasons.

Forget the 6pm news show, that’s so last season. Newshub Live at 8pm is launching on Gusto next year, promising a “tightly-curated” 30-minute bulletin focused on the day’s big stories. As well, Newshub Late is being “reshaped with its own identity”. In excellent news, Melissa Chan-Green is joining Ryan Bridge as co-host of AM, the replacement for The AM Show. Big Chan-Green fan here, so this is a great promotion for the veteran of 14 years.

Drama and comedy is nil-by-mouth

Local TV production companies must be sweating about this: today’s announcement doesn’t include a single mention of a scripted drama or comedy show. Remember, Three is the channel that gave us Outrageous Fortune, the most successful local drama, ever. It’s also been the home of local comedy for years, delivering us Funny Girls, New Zealand Today, Jon & Ben and 7 Days, among many others. Are those days now over? From the press release: “Discovery will make further announcements in 2022.” The last NZ on Air funding results come out on December 1 – so watch for those.

Another potential salve for those worrying that Discovery is turning Three into a scripted-free zone? The last thing Kyne said on the presentation was a reference to the potential merger with Warner Media. That would add the news powerhouse CNN and scripted savant HBO to the company, an enormous change which would give it access to one of the strongest content libraries anywhere in the world (Sky has a long-term deal with HBO, but given Discovery’s cosy relationship with Sky, anything is possible).

What is Discovery doing to 7 Days?

7 Days, the long-running comedy which has launched multiple comedy careers and has been cribbed to much shorter seasons over the past two years, gets a brief mention, promising an “all-new” look. All-new? ALL-NEW? What does this even mean? New sets? New gags? New stars? New format? WHAT IS HAPPENING?

Who will replace Tova?

This is the question everyone wants answered, and today’s press release does not do that. She’s going to radio, at MediaWorks, and the heir apparent, Lloyd Burr, is also heading to Magic Talk , meaning a gaping hole has opened up in Newshub’s political coverage. Some backhanded discussions and super-secret meetings are surely underway.

Given the state of the planet, this should probably be at the top of the list. By 2026, Discovery’s Australian and New Zealand operations will be carbon neutral. Bravo. (Sorry).