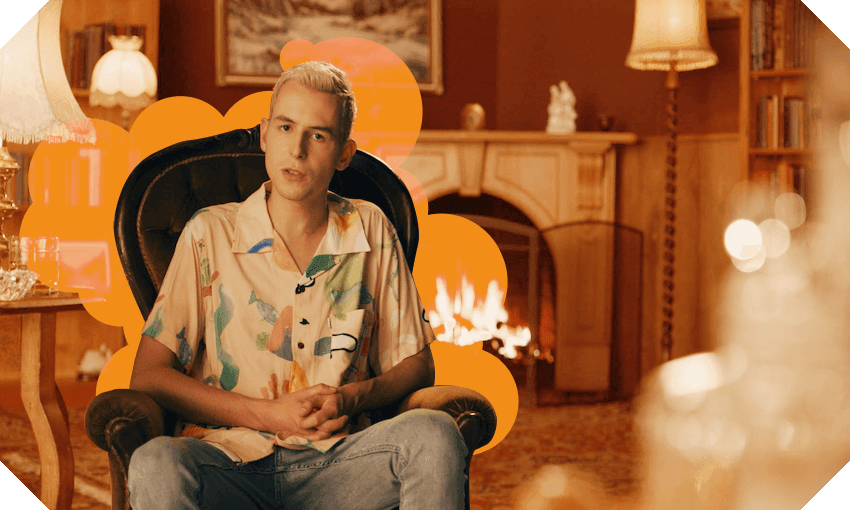 New TVNZ series Abandonment Issues tracks down forgotten celebrities from Aotearoa’s TV past. Stewart Sowman-Lund asks its host how he navigates the razor edge between mean and funny.

Comedian James Mustapic has made a career out of poking fun at New Zealand’s C-list celebrities. Now, in his new TVNZ OnDemand series Abandonment Issues, he has to meet them face-to-face for the first time. The new six-part series features encounters with the likes of NZ Idol stars Michael Murphy and Ben Lummis, Sensing Murder “psychic” Sue Nicholson and Target host turned NFT entrepreneur Brooke Howard-Smith.

Not all of Mustapic’s guests have appreciated his jokes about them in the past. In 2019, for example, he was embroiled in a well-publicised feud with Nicholson after saying on national television that she should have won “best actress” for her performance in Sensing Murder – a role which Nicholson, at the very least, would deny involved any acting.

“What a PACK OF WANKERS on 7 Sharp tonight taking the PISS out me,” the psychic medium wrote on her Facebook page at the time. “I wasn’t the only one on Sensing Murder, this is called bullying.”

i would like to formally apologise for saying sue nicholson of sensing murder was snubbed by the oscars for best actress on 7 sharp tonight pic.twitter.com/KdjQCI5Fp6

Mustapic has also claimed former Sticky TV host Drew Neemia hated him after he was targeted by the comedian in a series he made for The Spinoff. A future episode of Abandonment Issues will address this, but Neemia’s unlikely to appear.

Despite Mustapic’s public history with many involved in his new series, the comic told me he managed to lock in pretty much all the guests he wanted for the show. “I envisaged six episodes from the start and then thought we’ll have to change some depending on whether the talent said no to being a part of it. But we ended up doing all six,” he says.

Much like his previous work, Abandonment Issues sees Mustapic tread a very fine line between making fun of his guests and having a laugh with them. The jokes never come across as spiteful or misplaced – this is certainly not a roast – but it’s not always clear whether the guest is in on the gag. On screen, Mustapic is calm, collected and a little bit awkward. But he admits that, internally, he did feel some nerves making the show. “Sometimes I write these questions and then when I’m in person with them I think ‘no, that’s terrible’,” he explains. “There’s something about being in the room with them.”

In the first episode, for example, Mustapic gets NZ Idol runner-up Michael Murphy to sign the winner Ben Lummis’ CD. An extended sequence in episode two sees Mustapic meet with a clairvoyant called Sheena, who claims she’s had an encounter with the sun god Apollo. “Was he hot?” Mustapic asks deadpan. “He was hot alright, he was the sun god,” replies Sheena without missing a beat. She is there to teach the comedian how to send love to Sue Nicholson via the “astral plane”.

Most of the guests, Mustapic explains, went into the show knowing that there was likely going to be a bit of gentle mockery. “I didn’t tell anyone what my questions were going to be,” he says. “There were some guests who were very onboard, like Jason Faáfoi. He was very much like ‘hey, make fun of me as much as you want’.” Michael Murphy was similarly up for it: “If I asked him a mean question he leaned into it, which made me feel it was fine.” Target’s Brooke Howard-Smith was happy to dissect the iconic “panty sniffer” saga and open himself up for ridicule on his NFT side-hustle. As for clairvoyant Sheena, Mustapic reckons they had a good rapport but says: “This is bad but they probably won’t know how to use the TVNZ OnDemand app.”

Mustapic says he enjoyed when his guests leaned into the absurdity of the show. “If I was a celebrity on this show I think that’s what I’d like to do,” he says. “With each episode, I did definitely think about how far I would go.”

Nevertheless, he admits that some people weren’t totally impressed, hinting that perhaps Sue Nicholson wasn’t entirely happy with her appearance on the show – despite claiming she wanted to put the pair’s beef behind her. “We did have a few issues along the way,” Mustapic says. “I think we’re on good terms, but let’s just say that episode went through many, many rewrites. It didn’t quite go to plan.”

None of the guests who have appeared so far have got in touch to complain, he says, although former New Zealand Idol judge Paul Ellis wrote a disapproving comment on Facebook.

“I didn’t even make fun of him!” Mustapic tells me, bemused. And it’s true, he didn’t. Maybe being made fun of is preferable to not being remembered at all.

Abandonment Issues is streaming now on TVNZ OnDemand, with new episodes every Friday.